Duncan McDiarmid, his second wife Mary (a widow) their son John and Duncan’s daughter from his first marriage to Margaret McGregor arrived in Quebec from the Parish of Comrie, Perthshire aboard the Brig Curlew.  They, along with two other families the Fergusons and the McLarens, walked from there to Beckwith Township to start a new life and hopefully a better one.

Dr. George Edward Kidd wrote in his book The Story of The Derry,  “Duncan McDiarmid was the elected captain of the group, and he called a final halt to his little band when it had reached lot 22 in the fifth concession.  Here, in a maple grove and by the side of a spring which still runs water,…., they made their camp.  Later they filed claims on nearby lots, and here they made their new homes.”

It appears that the rest of Duncan’s first family arrived after as they are not on the list of passengers on the Brig Curlew that brought Duncan, but are present in Beckwith Township by 1820 according to the census of that time compiled by the Town Clerk.

Of the first family, Angus McDiarmid, eldest son of Duncan and Margaret, married Annie Livingston, daughter of Donald and Janet (Jeanet) McAra.  The Livingston family also traveled on the Brig Curlew in 1818 from the Parish of Dull.  They settled in Goulbourn Township on the border of Beckwith.  Angus settled on a clergy reserve, lot 24 concession 5, and here he and Annie raised their family.   This family consisted of John, Peter, Duncan, Donald, Janet, Margaret, Mary and James.

John McDiarmid bought out his siblings’ share of the farm on Angus’s death and remained there until his death in 1876.  He married Janet McRorie and they had two sons, John Duncan and James A.

Peter, Duncan and Donald all went on to teach, then Peter and Duncan turned to study medicine, while Donald began studies to become a Baptist Minister.

Donald died before his studies were complete in 1864.

Peter first practiced medicine in Scarborough, Ontario, but then made his way to Fontanelle, Adair County, Iowa and married Anna Hetherington in 1874.  They had one son Pierre who died in Fontanelle in 1922.  He too followed in his father’s footsteps and became a doctor.

Duncan McDiarmid took over the practice worked at by Peter in Scarborough and he married a widow, Agnes Purdie, who had two children from her previous marriage, David and Viola Jacques.

James attended McGill Medical School, but was still living at home in the 1871 census.

Of the daughters, Janet died young and unmarried in November 1871.

Mary married Joseph Kidd in 1869 and stayed in the Derry.  They had the following children, Margaret, George Edward, Elizabeth M., William Livingston, James, Angus, John, and Annie.  Mary died in 1889.

John Duncan, son of John, grandson of Angus, took over the farm and married Christina Drummond.  His son John Earl then managed the farm and it is still in the family today.

Duncan McDiarmid’s other children from his first marriage did well for themselves as well.

Peter, youngest son of Duncan and Margaret married first Janet Livingston, sister to Annie, Angus’s wife.  They had one daughter Jessie who was later raised by Angus and Annie after Janet’s death around 1841.  Peter then married Janet McIntosh in 1842.  They had the following

Catherine, the daughter who came on the Brig Curlew with Duncan and her step mother Mary, married Alexander Kennedy about 1823.  He was a son of Donald and Catherine Ferguson.  They first lived in Beckwith, then selling their farm and moved to Carleton County, Nepean.  Catherine died 1890.

Elizabeth married Alexander Scott and they lived on the 9th concession of Beckwith.

Photos from  the Carleton Place and Beckwith Heritage Museum

McDiarmids was just up the street from the Keyes Building on Bridge Street where The Granary is located-note the balcony. 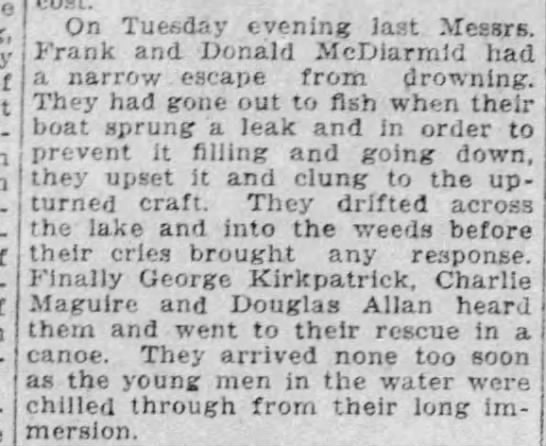 The history of Duncan’s second family is well researched on his one son James who married a Carleton Place woman by the name Jane Morphy.  More information is available at the Carleton Place Public Library by another researcher.  James was a merchant in Carleton Place.

I have no information on son Duncan except he became a Presbyterian Minister.

Donald married Elizabeth McIntosh in 1847 and became a Baptist Minister.

I have no information on Hugh except he was to have moved to Toronto.

The son John was left the farm on Duncan’s death, and he later sold it to Alexander Ferguson, his brother in law, and moved his family to Osgood, Ontario sometime after 1861as far as I can tell.

You Can Leave Your Hat on in Carleton Place!

Jonathon Francis and Margaret Carswell– From Scotland and Ireland to Pakenham

Connecting the Bread to Go with Mr. Jelly-Carleton Place Genealogy

Muirhead Gillies and the Boxes Are All Related–Genealogy and Photos