Tom Edwards wrote a few weeks ago on Facebook that he read the column “Today’s Child”. I had never heard of it so I decided to do some sleuthing and found out how popular Helen Allen was.

Once referred to as the “fairy godmother of adoption,” journalist Helen Allen tirelessly worked for 18 years to find homes for 11,000 children who had no parents or relatives to take care of them. In her column, Today’s Child — which began in the now-defunct Toronto Telegram but later continued in the Star and other local papers like the Ottawa Journal.

The Globe and Mail, for one, publicized the plight of war orphans and was able to brag that its efforts meant 181 homes had been found. Not to be outdone, the Toronto Telegram started putting Helen Allen’s “Today’s Child” column on its front page, with its heart-wrenching details of the needs of these kids.

Her work on behalf of domestic adoption in Canada garnered her many awards. The most recent was a Special Achievement Award from the North American Council on Adoptable Children in 2005.

Helen Allen was honoured for her pioneering work with the “Today’s Child” newspaper column. Today, it’s a fixture at the Toronto Star, which since 1971 has featured the pictures and profiles of children awaiting adoption.

But when Ms. Allen, then a reporter for the Toronto Telegram, launched “Today’s Child” in June 1964 it met with skepticism from the Children’s Aid Societies of the day, who balked at the idea of parading their children before the public. Three of the 51 CASs did take part — Hamilton, Kenora and Toronto — and the daily column became a success. Other daily and weekly papers in Ontario picked up the column and in 1968 Ms. Allen launched a television version on CFTO-TV, “Family Finder”.

Columnist Helen Allen treasures this picture of Albert, 4, a cystic fibrosis victim, that appeared in the Today’s Child column three years ago. Six months later, a Newfoundland family saw him in an old copy of The Star wrapped around a parcel from Toronto, and adopted him. Cooper, David–Picture, 1981–Toronto Star Photo Archive

Helen Allen received many honours. She was named to the Order of Canada and received an honorary doctorate from York University and the Award of Merit from the City of Toronto.

Helen Kathleen Allen was born in Dundurn, Sask., on Aug. 16, 1907. She married Charles Stacey in Toronto on Oct. 3, 1980, when she was 73, and he 74. In 1981 she stepped down from the “Today’s Child” column (Judith Adams did it for seven years more) and “Family Finder”, but still spent two days a week writing letters and Adoption Bulletins. 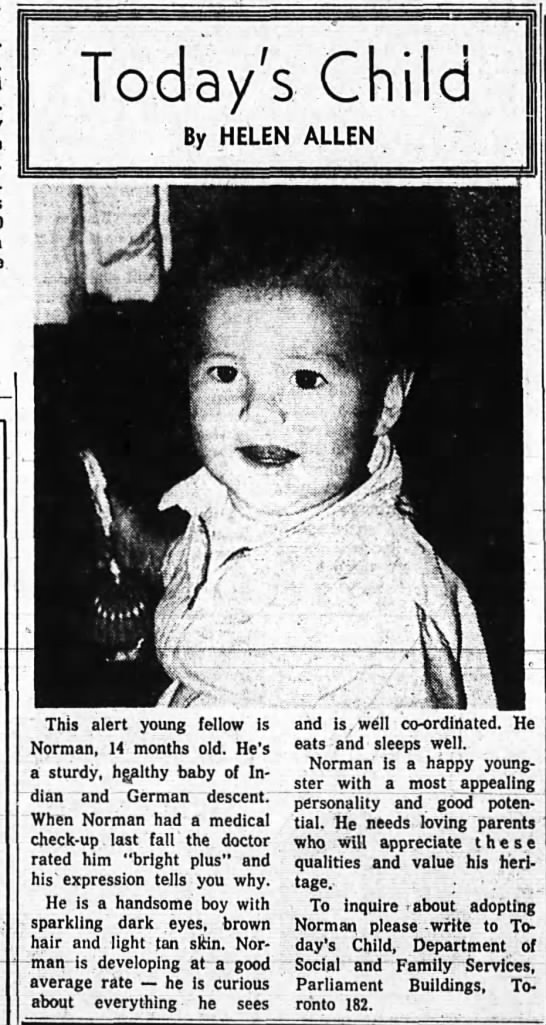 Today’s Child — A Look Back

Margaret Lucas
I was in one of those pictures in May 1965 with my four sisters. I vividly remember getting together for the picture to be taken and it was an awesome day. We were not all adopted together but have found each other later in life. Love that picture so much and looked at it often throughout the years.–
Comment from Theresa this morning.. not everyone was lucky.
“As a Metis child growing up when the Toronto Star featured many of these children during the 1970’s, my heart would break. There was a disproportionate large number of Indigenous children featured. Why couldn’t they be with their birth families? My heart still breaks today at the large number of Indigenous children that are still taken away from their birth families, often at the moment of birth. How can that mother have caused harm to her child? She hasn’t even held her babe yet. I’m currently helping a 60’s scoop woman fill out her claim form. Ripped away from her birth family as an infant, she doesn’t even know what Indigenous Nation she comes from. When will it be understood that we can’t be forced to assimilate. After all, it is truly a difference of opinion and culture as who considers who the “uncivilized” one. Allowing us to raise our own children, or those who rip our families apart?”
Related reading

Sad Memories of the Waifs and Strays Society