Tom Edwards sent this photo in and I wondered where Bedell was. In 1886 Bedell was known as Kemptville Junction. It was renamed Kemptn in 1912 and then renamed again to Bedell Crossing in 1919

Tom Edwards said:When you go through Kemptville, just past the college, there is a hill that you cross over the railroad tracks. Eastern Breeders is on the left. My kids used to call this Jelly Belly Hill, because you could get lift off at 60 mph. They used to get a big kick out of that.

See more at Bytown or Bust by Shirley Deegan

The Deegan /Deighan family arrived in Canada around 1800 in Kemptville, Ontario.
The name was changed to Deegan after the death of Daniel James Deegan 1857, in Oxford Mills, Ontario.

I saw the original foundations of the house where our ancestors lived , the
apple trees, the lilac tress that were planted by our ancestors.
I even ate an apple from one of the trees. We opened a hand dug well that my
Great Great Grandfather, Daniel Deighan,  dug and there was still water in it.
I saw the old school house on the property (now used to store hay) where the
children went to school. One son had 11 children and other had nine. So it
was a family school House. I even saw  the old wind mill and even managed to pick up some stories from the old folks at a residence who knew the Deegans’ at the time. It was a thrill.

I even took my Aunt up there to see it. That would have been where her father was born.
She is still alive today and will be a 100 years old on April 5, 2011.

My Great Grand Father Daniel D.L. Deighan (Deegan) Built a 16 room
House/Hotel/Bar at the end of the property at the cross roads of Bedell  on
The Canadian Pacific Railway line. He called it “Deegan House”. I have a
picture of it. I also have a picture of my five Grand Uncles taken together.
“Deegan House burnt down”. I have pictures of the Holy Cross Mission as well as the new church Holy Cross Church.

See more at Bytown or Bust by Shirley Deegan

“In 1932 we applied to remove the derails at Bedell.  At that time we were unable to say just what saving we would effect by the removal of the derails.  Since that time we have kept a record and it has been found that three additional sectionmen are required during four months of each year at a monthly rate of $85.00 each which amounts to $1,020 per year for labour to remove snow from the derails and pick ice and snow from between the main line rails from the derails to the diamond, which cannot be removed with flanger or snow plow on account of the guard rails.

“In order to effect the above mentioned saving and also to eliminate the hazard created by the derails I beg to renew our application for permission to remove the derails at this point.”-– Colin Churcher

From Colin Churcher-There are quite a few photos of the Bedell station floating around. Here’s one in colour that came from Graeme Roy via LBC. It looks like the same 1887 standard pattern as various other stations on the Winchester Sub. that we’ve been discussing recently,

This letter appeared in Branchline for March 2007:.

“MEMORIES OF BEDELL: I read with great interest the story by Colin Churcher titled “The Interlocking at Bedell” in the January 2007 Branchline. The reason for my intense interest is because I was literally raised in the tower at that location. My father was the 1201 to 0800 operator for 29 years before becoming the agent, and I worked there as an operator for a number of years before moving on to other positions with CP Rail.

I thought I knew quite a bit about Bedell but I didn’t access the Public Archives of Canada as the writer did to learn the early history of the place that is so well documented here. As an example, I didn’t know the Prescott Subdivision between Ottawa and Prescott was in operation for 30 years before the Winchester Subdivision was built from Smiths Falls to Montreal.

As stated, Bedell was originally named Kemptville Junction, then Kempton, and finally Bedell in honour of a General Bedell who was prominent in World War 1.

The levers in the tower and the activity involved in throwing them to keep trains moving, as well as the pictures accompanying the article brought back fond memories of my younger years. I literally saw and heard thousands of trains passing over the diamond at Bedell. At my retirement party in Montreal in 1984 after 42 years of service, I was given a copy of my service record. It identified many locations and positions held during my years of service and also no demerit marks but five merit marks given to me for discovering a broken rail in the diamond at Bedell in 1956.

Well done Mr. Churcher, it is a very informative and enjoyable article, particularly for me. (Sammy Gaw, Kemptville, Ontario)”–Colin Churcher 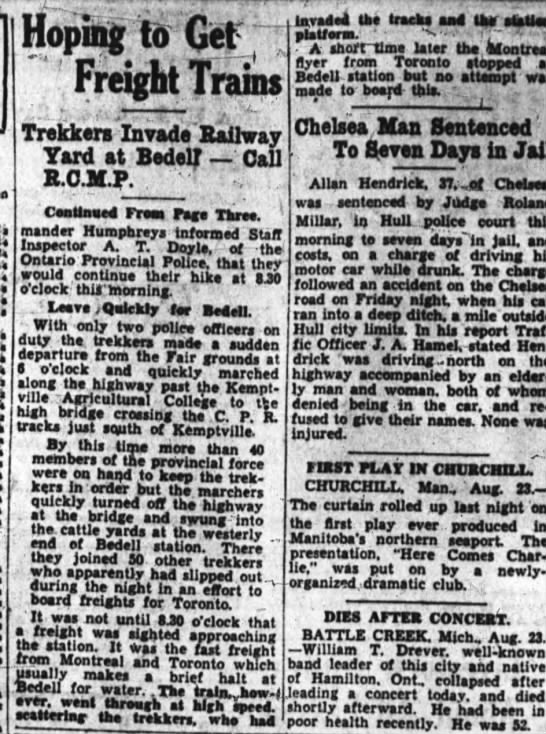 Where was Bay View House in Appleton?

Where Was Hunter’s Mill and Huntersville?

So Where Was Craig’s Camp? How About Marble Bluff?

Where was Almonte’s Military Headquarters?

So Where was the Location of the Almonte Illustration?