I have told the story before of how the Granite Chapter of Royal Arch Masons in Carleton Place was consumed by fire in 1910 and the Masonic Temple was rebuilt in 1911. Any Royal Arch Mason will recognize the significance of the keystone in Royal Arch ritual.

The fire had been discovered at the rear of the building at the corner of Bridge and Albert Streets in the heart of the town.  This building was occupied by Cameron Brothers and W. Singleton & Son and there is considerable doubt as to which side of the premises the fire originated.  However, it is generally believed that the fire started from a box stove at the back of the meat shop. The fire of 1910 rushed down Albert Street and caught on the brick building occupied upstairs by the Freemason lodge and downstairs by the Salvation Army.

From this building it leapt to near by buildings and then caught on the steeple of the Zion Church.  The firemen worked valiantly to save the edifice but their efforts were futile for the stream would not reach the blaze.  The flames soon enveloped the whole church and then huge arms of fire were stretched out for more prey.

One Saturday morning a few years ago, during a cleanup of a back storage closet, in one filthy cardboard box, was found a marble keystone that was scorched and cracked, with chunks missing from its top. Nobody alive today realized that we had this object. It turned out that it was the keystone from the Chapter, that had gone through the fire a century ago.

Today, we have the keystone on display during appropriate parts of the ritual and use it as a tool in our Masonic education. It is sometimes used it to discuss the story of the symbolic Masonic bird, the Phoenix, that is consumed by fire, rises again from its own ashes.

With files from the
Grand Lodge Library of Canada 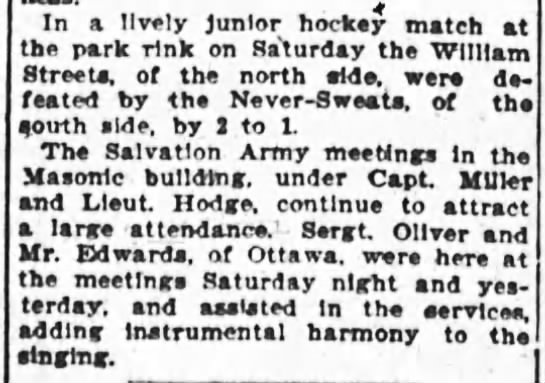 Llew Lloyd Photo courtesy of Reid McIntyre Ingleside On .
Jennifer Fenwick Irwin Four individuals are identified in this photo: the small boy at front is Ross Davies, who became the editor of the Carleton Place Canadian. Clarence Doucette is the young man with light cap looking towards the camera at center. Agnes Healey is to the left of the wooden triangular structure, wearing white and a big straw hat. The older gentleman sitting in the buggy at bottom left with his back to us is a “Mr. Arthurs.” The occasion was the laying of the cornerstone of the present Masonic Temple building at 55 Bridge Street- Linda says — you can see the Moose on the other side of the street