Author’s Note-The Coleman family was the third family to settle in Morphy’s Falls and James set up a shoe making business and built a two storey home beside in the 1830s. He taught his sons William, James, and Andrew the trade. Andrew was a shoemaker all is life and lived in the original family home on Bridge Street. Fred West and later Ned Root had a shoe repair shop where you could get lifts for your shoes for 15 cents or half soles for a $1.00. Later on this location was a candy shop called the Ideal Candy Store run by Sandy Robertson and his wife Thelma.--Carleton Place Then and Now–Bridge Street Series– Volume 6-The Eating Place to the Post Office

I am pretty sure it was Sandy Walker’s mom and dad that ran the Ideal Candy Smoke Shop.I think all the Nephins worked at Earl Horricks garage. I know that Tim, Dave and Peter all did. It was a regular place to go. We used to all go there and wait for Peter to finish working, and then drive around town half the night in his car. I think Peter was the only one among us at that time that had his licence and a vehicle. I remember Mrs. Nephin worked at Maple Leaf Dairy.

In the picture above, you can see the Royal Bank, and as Angie said, you can see the railings at the Bank of Nova Scotia. Beside the old Bank of Nova Scotia is still the old post office where the accountants are. The next building is the old Canadian Tire store. I do remember when Dot Burns had her tea wagon uptown too, but I wasn’t sure where it was. The next building on the same side would have been Canadian Tire at that time.

I remember Gordon’s Mens Wear was where the Eating Place is now. I remember the Marching Saints were above Gordon’s. I wasn’t very old but I do remember standing there one night with my dad when Gordons Mens Wear burned. Some of you a little older than me, may remember that, better than I do.

I also remember that gawdam air raid siren behind the post office. It was almost directly across the road from my house. I can remember when they used to come to service that thing, when it went off, I was terrified and literally ran for home. Used to scare me half to death. Was likely 5 or 6 years old then. 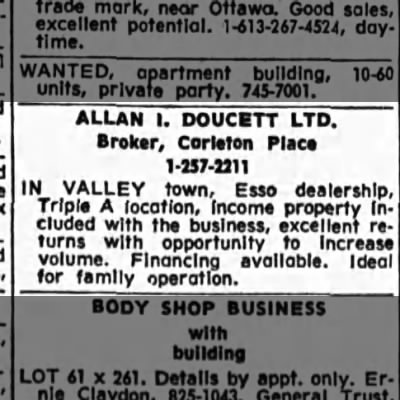 Coleman Family History–Just for Your Records

As the World Turns in Carleton Place — Soap and Ground Beef