No, Lipstick wasn’t made illegal in 1770

“In 1770, British Parliament banned lipstick, saying it had the power to seduce men in to (sic) marriage, which was classified as witchcraft” – https://www.facebook.com/SteampunkSteampunk, ‘history fact of the day’ October 27, 2015

First off, any law or proposed laws in the UK parliament have to be published in the London Gazette – https://www.thegazette.co.uk – this can easily be searched to show no such law was ever proposed in parliament.

This myth seems to have originated from a filler piece in a Richmond, Virginia newspaper from 1861 – fillers, as the name implies, were short paragraphs to fill up space in a paper – they were written on the spot if there was a blank space in the layout of the page that needed to be filled, and they tended to be humorous articles that were not meant to be taken seriously:

–A law against obtaining husbands under false pretences, passed by the English Parliament in 1770, enacts–‘”That all women, of whatever age rank, profession or degree, who shall after this act, impose upon, seduce, and betray into matrimony any of his Majesty’s subjects, by virtue of scents, paints, cosmetic washes, artificial teeth, false hair, iron stays, bolstered hips, or high-heeled shoes, shall incur the penalty of the law now in force against witchcraft and like misdemeanors and the marriage, under such disbursement upon conviction of the offending parties, shall be null and void:”’

The Daily Dispatch: August 27, 1861.
August 27, 1861. Richmond Dispatch
Note the anachronisms – the London Gazette doesn’t use the word ‘cosmetics’ (or ‘cosmetic wash’ at all) until 1854. There was no law against witchcraft in 1770. The Witchcraft Act of 1735 recognized there was no such thing as witchcraft – it said that people were only pretending when they charged people money for making things like love spells and potions. And there was no ‘Parliament of England’ in 1770 – it had been merged with the Parliament of Scotland in 1707 to form the Parliament of Great Britain.
Other sightings: In a humor piece from 2005: Pop Goes the Culture
In a 2006 student term paper: Reading Our Lips: The History of Lipstick Regulation in Western Seats of Power, by Sarah Schaffer  – Schaffer does admit in a footnote about what she calls “this slightly mysterious 1770 law” that “…a search through statutes passed by the House of Lords in the 1760-1780 timeframe reveals no such cosmetics legislation” – Schaffer cites several academics who take this seriously, like Neville Williams’ Powder and paint: a history of the Englishwoman’s toilet, Elizabeth I-Elizabeth II, (1957). 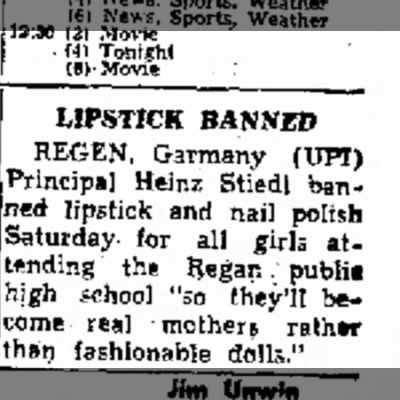 Come Back to the Five and Dime Carleton Place–Robertson’s

Those Kylie Jenner Lips? — Pop Rocks on Your Lips

Why is my Face on Top of Courtney Love’s Body?