Jennifer Fenwick Irwin from the Carleton Place and Beckwith Heritage Museum has a request from the UK for information on the Mann family of Blacks Corners.

All Jennifer could find was this photo of Lorraine Mann from 1986 who was working at Leigh Instruments. The inquirer is asking about the 1970’s – Herbert John and his children (one of which was Lorraine). 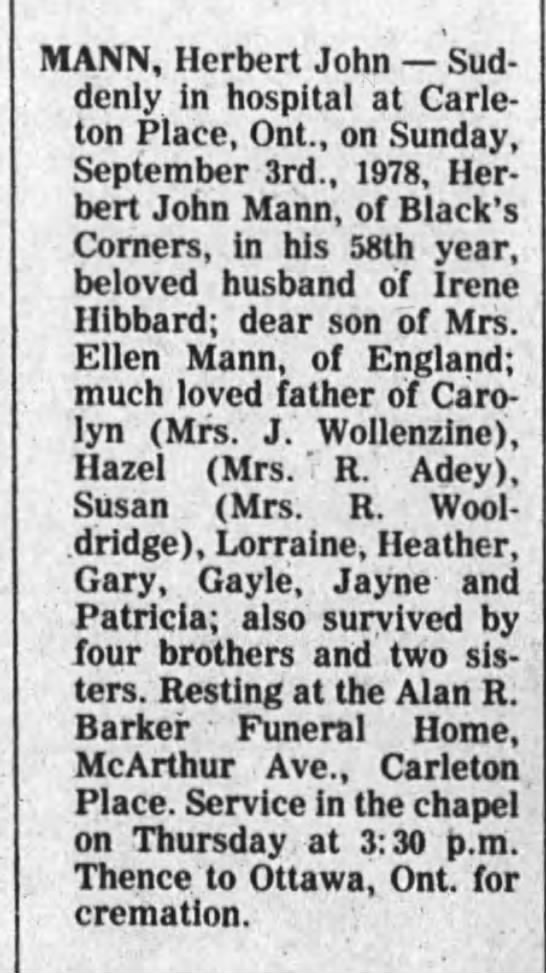 I have been trying to track down details of the children born to Herbert John and Irene Beryl Violet Mann whilst resident in Canada in the 1950s and 1960s for some time without success and am seeking any advice or help in how or where I can obtain the details.

Herbert John Mann was the son of Arthur Allen Mann and Ellen Frances Mary Mann and was born on the 22nd January 1920. He married Irene Beryl Violet Hibberd on the 10th September 1949 in Petersfield, Hampshire and they had two children Carolyn Leslie (b1951) and Hazel M (b1954) both born in Petersfield.

The family then emigrated to Canada and I understand that they went on to have a further seven or eight children and it is these children that I am trying to trace details of as I have no record of their names, dates/places of birth or any other details. The only other information I have on Herbert is details on a headstone commemorating his death in 1978 which is situated at St. James Anglican Church, Carleton Place Cemetery, Lanark Co., Ontario. The headstone reads:-

Diana and woodchal many thanks for your informative responses to my posting and your contributions are much appreciated.

woodchal, the obituary you found has been of great help in enabling me to identify the names of the additional children of Herbert and Irene and answer a lot of questions. I am slightly confused by the reference in the obituary to Herbert being “also survived by four brothers and two sisters” for as far as I am aware Herbert was the only child of Arthur and Ellen Mann. I suppose the newspaper was only relying on information provided to them.

Diana, it’s interesting that you once lived at Black’s Corners and that it is such a tiny place – I must check it out as a matter of curiosity. I appreciate your advice and tips on sources to explore to try to ascertain further information and I certainly intend to check them out. I would also thank you for checking out some records so far and your proposal to contact some people you know and look forward to hearing from you further should that prove successful.

Having now become aware of the names of the further children of Herbert and Irene I can now take this a step further and try to find their dates and places of birth. As I am resident in the United Kingdom I am not aware of how the Canadian Registration system works. Is it possible to check indexes for births registered in the 1950s and 1960s as it is over here in England?

Searching for Information– Teddy Bears Made in Carleton Place?

Looking for the Watson’s of Lanark County I Presume

Searching for Information: J.A. Stevenson and Robert and Jane Ross of Lanark