This photograph is of the Grierson House in Crown Point. The picture and article were found at the Arnprior and McNab-Braeside archives by microfilm. – Archives October 1981

When the Bender family left Kanata in 1975 and moved into the most famous haunted home in the Ottawa Valley they joked about its history. The two storey stone structure located near Constance Bay on what is called Crown Point.

The story goes that a superstitious innkeeper in the 1870s refused to let a stranded traveller in one night because he thought he was the devil. The exhausted traveller who gave up after awhile asking the inn keeper for entrance crawled away and froze to death. He came back to haunt the house and there has been trouble ever since.

Of course the Benders said they would not have put down the asking price of $100,000 if they believed those ghost stories to be true. Yet the consequences of the century old jinx hit the family hard. In the first few weeks the whole family suffered a terrible rash that the doctors concluded might be poison ivy. The family boat moored to the dock disappeared one night after an angry storm never to be seen again. After Mr. Bender’s father died of cancer complications, the family began to think there might be something to the curse.

Out of the blue a few weeks later an older woman came to the house with a Ouija board and confirmed the fact the home had ghosts. The Bender children had heard tales at school of a stone in one of the two fireplaces that was was hollow. Sure enough, after testing all the rocks they found that particular stone that was hollow to a knock. They had no idea why the stone was hollow, and wondered if spirits lived in that stone. Was the hollow stone a dybbuk?*

Things got worse, in fact they got deadly. The story that went around was that hree-year-old daughter Mandy Bender was let out to play one day. When her parents lost sight of her they noticed small footprints in the snow leading to an open patch of water in the ice-covered Ottawa River. There was no word if police divers ever recovered her body at the point of this particular article. Later I found out that one month later they found the body of Mandy Bender.

Locals said the real story was that she had woken up in the middle of the night and walked a perfect straight line to the icy water, almost like she had been called to her death by something in the open waters.  After the tragedy the Benders got angry and wanted to meet these ghosts in their home face to face, but it never happened.

Mrs. Bender was so distraught she joined a group interested in psychic phenomenon and spoke in quiet tones about the hollow stone in her fireplace. Word had been passed on from generation to generation, and some older residents in the area won’t even speak about what has happened in that house.

The  history of the house has been written up in the Carleton Saga in 1968 and was built by a naval officer in 1928. Built in 1865 at Crown Point, the Grierson House was originally home to Lieutenant John Grierson. It was also visited by the Prince of Wales when his steamer anchored there to take on some much needed wood.
The ownership and usage of the home has changed hands over the years and has served as the Oddfellows Hall, medical clinic  and then an inn. A few years after it became an inn and the dreaded curse was placed upon the structure and it fell in disrepair until 1950 when a resident refurbished it and put in plumbing and electricity. After that, the ‘curse’ of the stranger has been attributed to a few tragic deaths attached to the house.

Joe Banks did an article for Arnprior Chronicle, in 1981 contacted Brenda Cain, who lived in the Grierson house in 1981. By that time, there had been a number of deaths in the house, but all explainable. The Benders did end up selling their home to a realtor, but have no idea what happened after. If you can fill in the blanks- drop me a line. 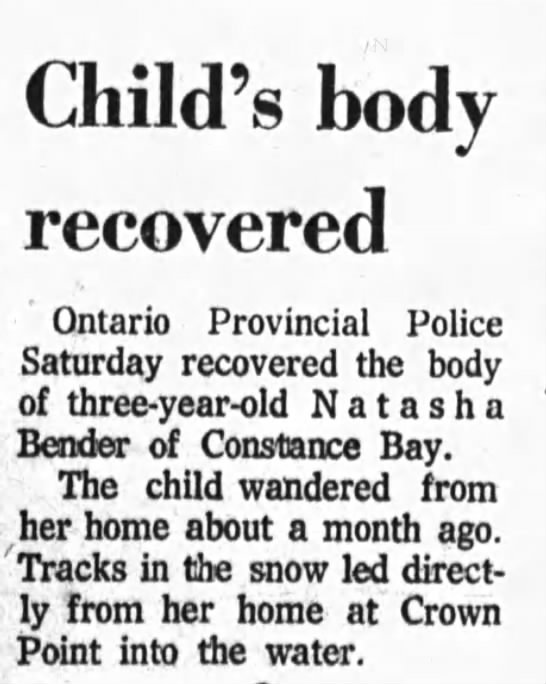 In Jewish mythology, a dybbuk (Yiddish: דיבוק‎, from the Hebrew verb דָּבַק‎ dāḇaq meaning “adhere” or “cling”) is a malicious possessing spirit believed to be the dislocated soul of a dead person. It supposedly leaves the host body once it has accomplished its goal, sometimes after being helped. It is often trapped in a small box or hollow entity for safe keeping. Was the hollow stone a dybbuk?

Of further interest to ghost enthusiasts is the reports of mild poltergeist activity in the home. From doors rattling to phantom footsteps. From ‘thumping’ sounds in the attic to metallic rattling in the cellar.

2006--“At Crown Point a fine stone home, now occupied by Mr. Al Federer & family, was the eventual home of the large Grierson family.After the Grierson’s, the property served for a time as a tavern and Inn for travelers. It is referred to in the “Carleton Saga” and other writings as the ‘haunted house.’ Apparently, a superstitious innkeeper refused to let a stranded traveller into the inn during a storm night because he thought it was the devil.So, in spite, says the legend, the exhausted wayfarer crawled away to die and returned to haunt the house.” There is also an old family plot is in Crown Point, Dunrobin road, as you come down the last hill before you hit Crown Point Road. Its in the field up the hill to the left.

Pinhey Cottage was built in the 1820s for Captain James Grierson of the Royal Navy. Grierson was born September 28, 1782 in North Leith, Scotland, and came to Canada in 1825 upon receiving a land grant in Torbolton as a reward for his service to his country during the War of 1812.  At this location, he built his family a log cabin, now known as Pinhey Cottage, a simple one and a half storey, gable roofed dwelling similar to log cabins built throughout Canada in the 19th century. Grierson lived there with his family for a number of years, eventually moving across the road to a more substantial stone house. In the 1930s, the 100 acre property where the house is located was purchased by The Girl Guide Local Association at the urging of Major E.C. and Mrs. Woolsey, after whom the property was named. It has served the needs of the Guide Camp since. When the land was purchased, the log house was in very poor condition and it was repaired through the financial assistance of  Ruth Pinhey, a resident of nearby Pinhey’s Point. It was subsequently named in her honour.

More About the Eccentric Stafford Family in Almonte

The Haunted Canoe from the Jock River