I found this online written in 2012 and it was printed in the Kemptville Advance from InsideOttawa.com.

I don’t know who it was written by as there was no name, but I thought I would document it here so we would not lose sight of it. I think it is Mary Cook by the style of writing and the mention of the farm. In fact if it was Vegas odds I would bet. I found a few clippings of Dr. Downing, so it seemed like a good addition.

The large brick house across the river was usually occupied by a doctor. Dr. MacFarlane occupied it before Dr. Chas. W. Ferrill who was a G.P. at that time and moved his practice to Cobden for a time. Dr. J.A. Johnson and his wife Ann Thompson lived there for a good number of years. 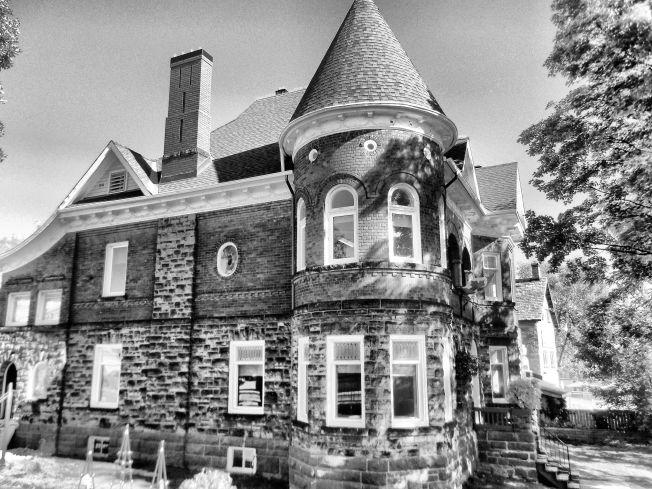 It was an imposing house to a young girl fresh off the farm. It sat majestically at the North end of the bridge on the Mississippi River in Carleton Place, and I thought surely someone with royal blood running through their veins must live in such a mansion. It was called “The Doctor’s House” and I learned that a Dr. Allen Johnson ran his family practice from this large brick home. I could see it from our much more humble home across the bridge, and felt then I would probably never get to see inside it.

However, something happened one wintery day that sent me scurrying across that bridge and into the doctor’s crowded waiting room. I inadvertently severed the leg of my beloved canary when cleaning its cage, and wrapping it in a face cloth and putting it in a small sewing basket, I tore across the bridge and into the red brick mansion, wailing my heart out. Dr. Johnson immediately took me and my basket into his office and performed a “surgery”. He attached two toothpicks around the little stub, wrapped them in tape, and sent me on my way. There was no charge and the little bird lived with his toothpick “prosthesis” for years! At last, I was inside the mansion across the bridge!

Alone, the Doctor’s House deserves a place in our history books. Add Dr. and Mrs. Allen Johnson into the mix, visiting dignitaries, and a few ghosts, and we now have a story of dedication, service and legends, about which most people of the present generation know little.

It wasn’t always brick. First, it was white frame, built by the son of the Reverend Bell, the first minister in Perth.

It is believed the present house was fashioned off a castle-like mansion seen by Dr. M. A. MacFarlane who studied in Scotland, and who purchased the property, and built the home in 1902, which is still standing today, in spite of a devastating fire in 1945. This is where Dr. MacFarlane conducted his practice and raised his family. When Dr. MacFarlane died, it remained “The Doctor’s House” when Drs. Downing and Ferrill took it over.

In 1924, a young doctor, well known in the Ottawa Valley, Dr. Allen Johnson, bought the home and with his wife Annie, established a medical practice that was to continue for the next 45 years.

Doctor Johnson’s contribution to Carleton Place, goes much beyond his medical practice. He was the county medical officer for many years. He was elected to council in 1929, and served as Reeve of Lanark County, and the town’s mayor.

Allen Johnson was an avid Conservative, and counted amongst his friends, members of Parliament both federal and provincial. He served the party both locally and at the county level and during every election, determined to have his member re-elected, Dr. Johnson took to the roads, rapped on doors, and generally let it be known who he was supporting.

It was to the Doctor’s House that dignitaries of every stripe were welcomed, but it was well known that Dr. Johnson’s leanings towards the Conservative party saw Tory members and Premiers more frequent visitors than representatives of other parties! Mrs. Johnson, a devoted wife, opened the Doctor’s House to dignitaries and ordinary folks alike, as her husband “collected” people much like one would collect coins or stamps. Their status or station in life meant nothing to either of the Johnsons. Pauline McGibbon, Lieutenant Governor for the Province of Ontario, on a visit to Carleton Place, rested in the turret bedroom, and on orders from her office, was served a “wee nip” of her favourite embodiment.

“The Doctor’s House” was also home to many who needed a helping hand to get back on their feet. Everyone was welcome.

Vera Hawkins, now a resident at Carleton Place Manor, worked with Dr. Johnson for many years.

“Those were the days when there were no appointments…first come, first served. We had an X-Ray machine, the only one in town, and before the hospital was built, it was often used by other doctors. It took up most of a whole room, and I had to go way down in the cellar to develop the x-rays. It was pretty primitive.

“The only room that was really private was what we called the Geranium Room and it was upstairs, and we took patients up these steep and narrow steps to be examined. In the office area, the rooms opened up on each other, so everyone had to climb these narrow steps when Dr. Johnson had to do an examination.

“But he was kindness itself, and so was Mrs. Johnson, and they were both loved by everyone. And the house was amazing. I have very fond memories of my years with Dr. Johnson,” Vera told me.

It’s Photo Friday! This crazy scene was photographed in the attic of Dr. McFarland’s home and office at 205 Bridge Street. Taken by Horace Brown in 1914, it is described by his good friend David Douglas Findlay, who wrote on the back
“this is a flashlight of me supposed to be in the DT’s (death throws?) taken in Dr. McFarland’s attic.The two ghosts are Ryan (?) McFarlane and Harry Menzies. I am supposed to be praying to them not to take me this time. That is a real human skull on the table but needless to say there is no booze in the bottle in my pocket.”

Dr. Johnson died suddenly at home in November 1967. He was waked at “The Doctor’s House”, and waiting in line to pay their respects were hundreds of people: simple folk, patients, and dignitaries. The line stretched from the steps leading down into the front entrance to the great house, across the bridge, and around the corner of the second block of the main street. Heading the lineup were the Honourable John Deifenbaker and his wife Olive.

After Mrs. Johnson’s death some years later, The Doctor’s House, took on a new life. It became a home and a commercial business. Where once patients lay on a black leather couch waiting to be seen, there were now weaving looms and massive arrays of coloured wools. Mississippi Black Sheep Gallery was opened by Susan and Gordon Scale, and flourished for many years.

The Scales weren’t there long when they found they weren’t alone! It all started one day when Susan was serving tea to a friend, and even though they were alone in the house, the visitor saw a man stealthily walking through the dining room. That was the first of many “sightings” and unusual happenings.

The Scales owned a black Lab and Terrier mix. One night the dog was seen tossing a ball and having it retrieved to be tossed again. There was no one there! Just the dog and an unseen being playing with their dog!

“We weren’t alarmed. But we knew without question, that we were not alone in the house,” Susan told me.

One day she actually saw an unfamiliar man walking down the driveway. “I was gardening, and I very briefly saw a short stocky man, wearing a very long reefer-type coat, like they wore in days of yore, walking in our lane.”

It wasn’t a long sighting, but long enough to confirm to Susan that a spirit had never given up “The Doctor’s House”. Was it Dr. MacFarlane? It certainly wasn’t the spirit of Dr. Johnson, who was over six feet tall! This man was very short. The Carleton Place and Beckwith Heritage Museum is searching for a picture of Dr. MacFarlane to see if a match can be found. 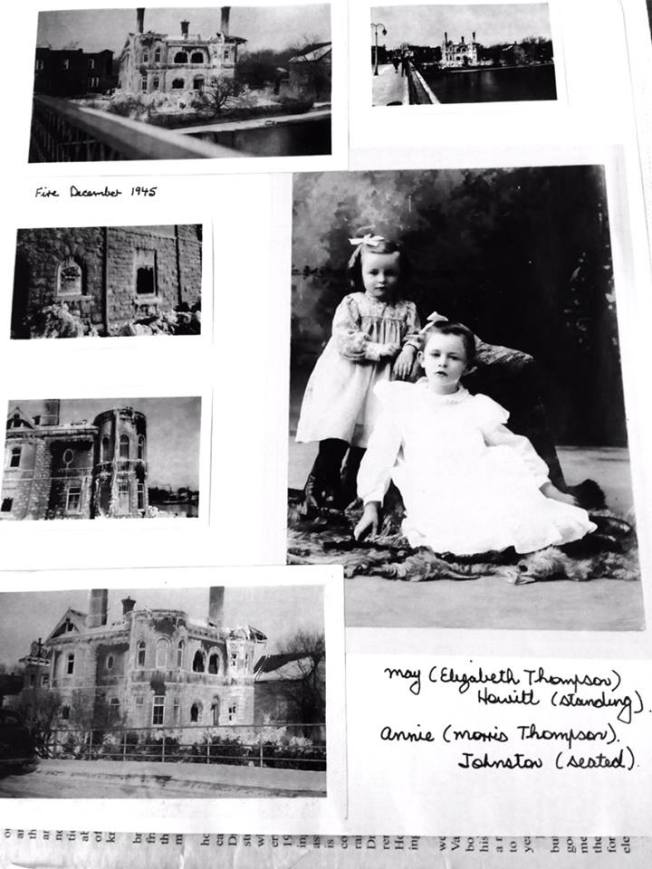 Now, The Doctor’s House has taken on yet another life. It was recently bought by Duncan McNaughton, who, when looking for office space to expand his Project Management Business located in Ottawa, could see the stately home as a perfect fit to enlarge his operations and make available individual offices to lease.

While retaining the integrity of the stately old home, much has been redone and made ready. Some walls have been taken down, and updates to services put in place.

And what about the spirit of someone who refuses to entirely give up residency? Well, according to Duncan McNaughton, one of his associates, unaware of the Scales experiences, says she hears someone walking upstairs. She can never find anyone, but the sounds continue.

What a life this stately old home has had! It has seen the sick being healed, and comfort given to the dying. It has housed notables and ordinary people.

It has been devastated by fire, and restored to its original grandeur. And what of its future now? Will it continue to be a place of note? Duncan McNaughton is sure it will. He fully appreciates the integrity of the stately old house and Tiree’s Project Management Business has found the perfect location to expand. And whoever moves in, claiming a portion of this grand old home, should be prepared to share their space. There will be nothing to fear, though. Susan Scale says these are friendly spirits.

Marg Whyte 2001– The large brick house across the river was ususally occupied by a doctor. Dr. MacFarlane occupied it before Dr. Chas. W. Ferrill who was a G.P. at that time and moved his practice to Cobden for a time. Dr. J.A. Johnson and his wife Ann Thompson lived there for a good number of years. 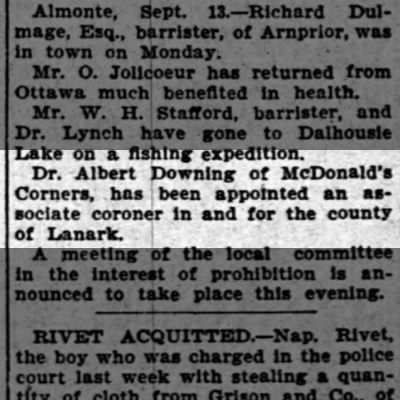 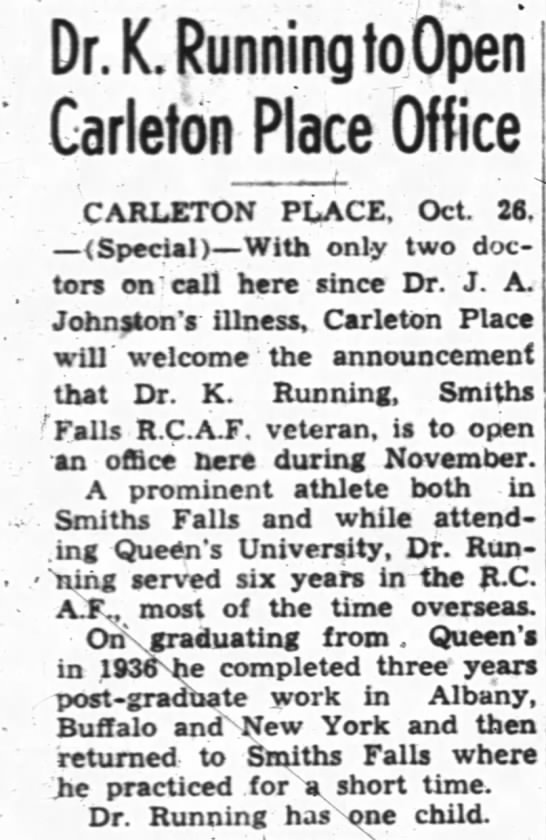 Ray Paquette- Dr. Running was my childhood GP until he decided to re-enlist in the RCAF. I was a friend of his eldest son, Gary, a graduate of RMC who followed his father into the RCAF before retiring and joining the Department of Transport. He currently lives on the West
Dr. Running maintained an office at the north east corner of Beckwith and Albert Streets. I remember the Saturday in the summer that Dr Running passed away following a massive heart attack while shopping in Carleton Place. At the time he was at his summer cottage on the Mississippi Lake.

Stephen Giles —The Running family cottage still stands down on the point at Beck (McNaughton) Shore.

Marilyn White- Gary took Ken Fournier to his dad at lunch time to have his head stitched. He fell in Miss MCrostie’s class. He was our family Dr. and he was one of a kind. Went to school with his son Ron.

Peter Iveson– We lived in Dr.Running’s house corner of Albert and Beckwith 1956 to 1960,where he was posted to Europe.

The 1945 Fire at Dr. Johnson’s Home in Carleton Place