Cecil Jennings, a dapper young man from Ottawa, who blew into town some weeks ago was arrested in Cornwall recently on charges of getting money under false pretenses. Jennings claimed to be representing an Ottawa music firm and he got in touch with music teachers in the various towns he visited.

When he came to Almonte Jennings got in touch with Hector G. Dallimore, organist at Bethany Church, and took an order from him for material he was to deliver, next day. Jennings turned up next day but failed to produce the goods. Mr. Dallimore had given him a cheque for $25 and when he asked him why he hadn’t brought the material he said some of it was not in stock and the whole order would be sent on in a day or two.

From there Jennings proceeded to Perth, where he is alleged to have swindled Miss Isobel Brown, a music teacher, out of $36. When she found Jennings wasn’t on the “up and up” Mr. Dallimore swore out a warrant for his arrest.

It is believed he swindled people in many places, and going on that assumption Chief Walsh sent out word to Eastern Ontario towns stating he held a warrant for Jennings’ arrest. Word came from Cornwall that the police of that city were holding the man whereupon Chief Walsh proceeded there and brought him to the county jail at Perth.

Jennings appeared before Magistrate Kirkland on Tuesday and his case was remanded for a week. In the meantime police are endeavouring to trace the record of accused.

David Lloyd—” Dilly ” Dallimore was our music teacher when I was in Prince of wales School . I remember he used to time the pauses in ” Men of Harlech ” by singing 1,2 . Of course that meant the whole class would sing 1,2 just to see him get upset . 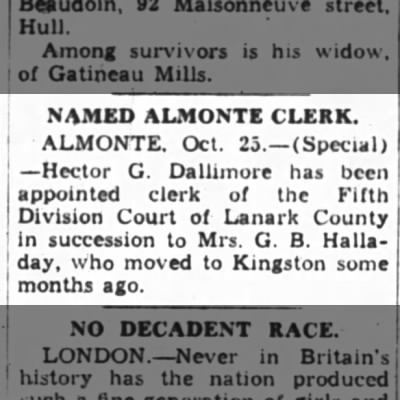 The Young Buckos of Crime–The Jumpin’ Jack Flash of Clayton

Thieves at the Mississippi Hotel–When Crime Began to Soar

The Scene of the Crime – It was 68 years ago today