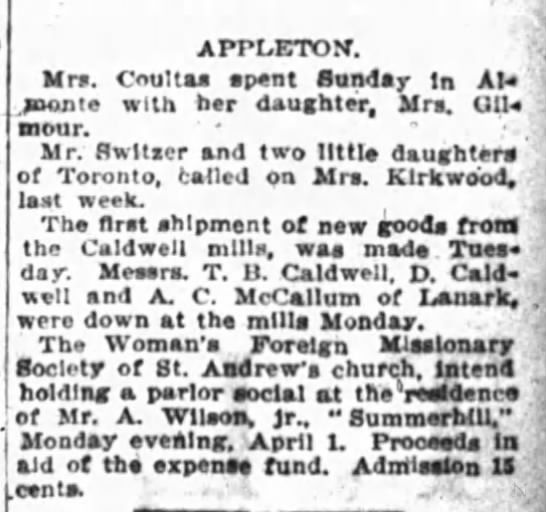 Another gem from Tom Edwards​- “These pictures are in a book. They are glued into the book so I can’t see anything on the back. Top Left says Caldwells Mills Appleton. Top Right says Caldwells Mills Appleton. Bottom Left says SS# 11 Ramsay and Bottom Right says CPR Station Bedell. There are more pics in this book. The date on a few of them are 1920” Author’s note–In 1886 Bedell was known as Kemptville Junction. It was renamed Kemptn in 1912 and then renamed again to Bedell Crossing in 1919.

This photo depicts a woman (Miss. Bellamine) with an unnamed young man on what appears to be an early bicycle at first glance. However, upon inspection this is actually a Coventry Rotary Quadracycle from 1885. When bicycles were just starting to take off, stability was a very big issue. In response to this, tricycles and quadracycles (4 wheels) gained momentum quickly in North America. This model is of note as it was one of the earliest quadracycles to incorporate bicycle-like foot pedals instead of foot levers.

Although it is not visible from this angle, there is a fourth wheel extending behind the machine, providing added stability. As bicycles became more stable, the quadracycle largely fell to disuse, however this photo from 1930 shows that if not as practical as they once were, quadracycles were still fun!

The Bryson Craig Farm in Appleton

Where was Bay View House in Appleton?

You Never Talk About Appleton