Keith Giffin –Our family lived in that stone house, for a number years in the late 40,s. The float that you see was from the optimist club of Carleton Place ,they sponsored a boys camp on Graham Lake as well as the Smith falls and Ottawa club

Ray Paquette– Didn’t Bob Francis and his family live in the residence when your family was on High Street?

Ray Paquette –-Connie was a good friend of my mother while my son Scott was in school with Matt, Mike’s son. I remember when they lived down the hill on Allan Street. Alan was in the Air Force and so the family was somewhat nomadic…

Stephen Giles— My Mother and her parents moved to Carleton Place in 1946. Their first residence was an apartment in this house

Blaine Cornell-Yes, Robert Francis and family lived in this old stone house.in the 50’s If i remember correctly his father’s name was Fred. I remember a family by the name of Monday operating the barbershop also in the mid 50’s.

Linda says “look at the buildings you can see beside Findlays”

John Toshack, who came to Ramsay with his wife, seven sons and two daughters, was a man of strong religious tendencies.  He had been a deacon in the Congregational Church under the Rev. Mr. Ewing in Glasgow, and preached in the first shanties of settlers in Ramsay before there was an ordained clergyman in the township.  His younger daughter, eleven years old at the time of the 1821 migration, became the wife of the first Peter Cram of Carleton Place.  Surviving her husband on the Cram farm homestead on High Street which later was acquired in the eighteen eighties by her nephew Peter Cram (1831-1920) of Carleton Place, she died in 1890 at the home of her daughter, Mrs. James Thom in Ramsay.

The buildings on the north side of High Street were rented houses owned by John McEwen, William Neelin, William Moore and Henry Wilson; and the homes of Mrs. John Bell, Arthur Moore and James McDiarmid; together with Joseph Pittard’s wagon shop, and two doors west of it near the future Thomas Street corner, the new foundry enterprise of David Findlay. —Howard Morton Brown

In 1914- A resident was awarded damages for injury to a horse frightened by an unattended and unlighted automobile parked on High Street. 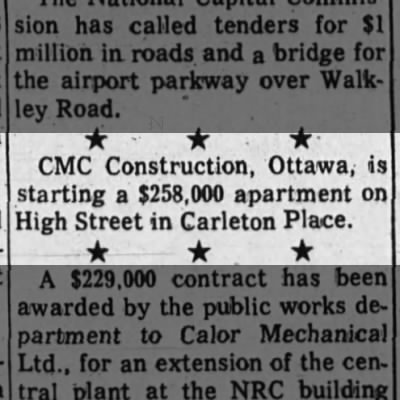 The Carleton Place House with the Coffin Door

Before and After – Old High Street Barn

One of the 7 Wonders in Carleton Place