he photo on the left is the Quinn home as is was in 1967. The photo on the right of a number of personalities who made the “Burges Ghost” come to life in 1935. (L-R.) John Quinn, Mrs. Quinn, Inspector Oliver, Patrick Quinn, Sergeant Story and James Kinlock

Strange occurrences were happening in 1935 at a farm in North Burgess just off the Narrows Locks road. Mr. John Quinn, his wife and two children, Michael, and Stanley, ages 13 and 11, reported innumerable phenomena taking place in their home. Stove lids, according to the Quinns, “danced” in the air, the teapot “jumped” off the stove into the wood box, three flat irons “walked” down a staircase and dishes “pranced” on the dining-room table. Word of this mysterious goings on spread quickly throughout the district. Although, perhaps skeptical, hundreds of persons from miles around flocked to the Quinn home. Read the rest here…Did You Ever Hear About the Burgess Ghost?

So who was it? Yesterday I found some newspaper clippings you might enjoy about the whole ordeal…. 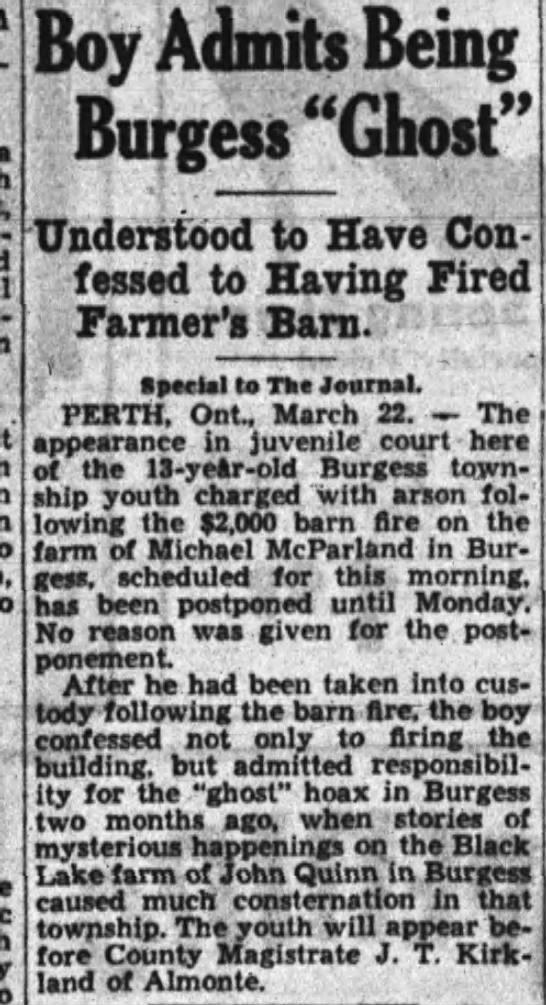 Read the sequel on what happened-