The Newfoundland Hurricane: 1775 (also known as the Independence Hurricane)

More than 4,000 people – mostly mariners – died off the coast of Newfoundland after a massive hurricane struck the area. The hurricane carved a path of destruction along the eastern coast of the United States from North Carolina to Newfoundland.

It is often referred to as the Independence Hurricane because it occurred just as the American Revolution was beginning.

Perhaps the most destructive hurricane in modern Canadian history ripped through southern Ontario in October 1954 after crossing the Caribbean and eastern U.S.

Hurricane Hazel left 81 dead and a path of destruction in its wake. Almost 2,000 families were left homeless as winds hit 124 km/h  and rains flooded low-lying areas.

The Greater Toronto Area was the worst hit. The Humber River swelled and broke through a footbridge, washed away an entire block of homes along the edge of the river just downstream and killed 32 people.

More than 200 mm of rain fell in 24 hours – the worst flooding in Toronto in 200 years. The water destroyed a trailer park in Woodbridge, killing another 20 residents.

Over the next several days, bodies washed up on the shores of Lake Ontario and in New York State. All traffic to and from Toronto was blocked while authorities and residents surveyed the damage, estimated at over $100 million at the time.

The effects of Hurricane Hazel in Canada included 81 deaths and C$137,552,400 ($1,281,202,354 in 2017) in damages. Hazel, the deadliest and costliest storm of the 1954 Atlantic hurricane season, reached Toronto, Ontario by the evening of October 15, 1954. It peaked as a category 4 storm, but by the time it reached Canada, it was an extratropical category 1 storm after merging with an existing cold front south of Ontario. Due to an area of high pressure to the north-east, Hazel stalled over Toronto and lost most of its moisture.

The worst-affected areas were communities near the Humber River, Holland Marsh, and Etobicoke Creek. Prone to flooding, the Humber River raced downstream from Woodbridge when an earthen dam failed. In the weeks prior to Hazel, Toronto had received copious amounts of rain, and the soil could not hold as much as 200 mm (7.9 in) of rain; consequently, over 90% of it went into Toronto’s waterways. The Humber heavily flooded Weston, and killed 35 people in Raymore Drive. Holland Marsh was severely flooded; while no one was killed, the economic losses were severe as the region’s crops were harvested but not collected.

In the neighbourhood of Long Branch, the Etobicoke Creek killed seven people and swept numerous dwellings into Lake Ontario. Toronto’s infrastructure also took a major hit, with as much as 50 bridges being washed out by the rising waters.

The Wrath of Hurricane Hazel

The situation was exacerbated by the lack of preparedness and awareness. Torontonians did not have prior experience with hurricanes, and the storm as whole proved to be extremely unpredictable—even the arrival of Hazel came as a surprise. Also, the low-lying areas near the Humber were mostly residential, which were among the worst-affected during the storm. In fact, following Hazel, residential development in areas along Toronto waterways was prohibited, and they became parks instead. 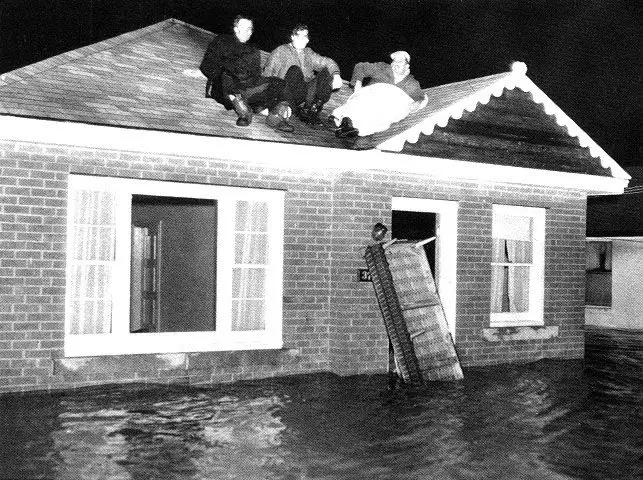 To help with the cleanup, the army was summoned. Due to the destruction in Canada, as well as the United States and Haiti, the name Hazel was retired, and will never again be used for an Atlantic hurricane. Since it was retired before the creation of formal lists, it was not replaced with any particular name.

The Smiths Falls Storm of 1897

Storms of Carleton Place- Which One?