Everyone has a guilty pleasure, and mine just happens to be 90 Day Fiance: Happily Ever After? on TLC, Sunday nights. (repeated throughout the week) I can tell you that TLC rounded up some real “sweethearts” this season and I wonder if they went out of their way to find “love” to shock us all.

Most of these male candidates on the new edition of the series are so much older than their future brides and I swear they act like they shouldn’t be allowed within 300 feet of their local high school.

The show’s shock and awe premise is based on couples who must marry someone they’ve met from another country in 90 days, or their special US “K-1 fiance visa” is revoked and the partner is sent packing.

Brides have been coming to this country for years in one form or other. There were mail-order brides which originated on the western frontier in the 19th century.  At that time, the number of men in the west far outnumbered the number of available women. Lonely farmers and ranchers would seek wives from “Back East” by placing ads in newspapers and magazines.  Interested women would write back and send photographs, and the couple did not usually meet in person until the woman showed up for her wedding to a man whom she had never actually met face-to-face.

My Grandmother was a War Bride after the first world war. In Cowansville, Quebec there were many women who had married military personnel in times of war or during their military occupations of foreign countries.

Mary Louise Deller Knight said she found herself coming over to Canada in a ship loaded with women. The war brides came because of the man they loved, and most brides had no idea what life in Canada would be like. They arrived tired dusty and weary, and some were met by their husbands and some had no one as their husbands were still deployed in the service.

My Grandmother was invited to a wedding shower within a few months of her arrival, and she went with a smile, but had no idea what it was. She thought that a shower was just a form of hospitality from a neighbour blessed with water. Mary Louise used to complain about the Canadian weather from the day of her arrival until she went back to visit England in the early 60s. She returned  from the UK saying she would never go back there because she froze the whole time because of their terrible heating system.

For a not-so-fortunate few, there were disappointments. The government had only undertaken to pay travel fares one way—so an unwelcome or unhappy war bride with no means of returning to her family faced a precarious situation. Eventually, they found help, from the Red Cross, sympathetic neighbours or communities, and managed to return to their families in Britain. In 1946 a total of 61,200 war brides and children came to Canada after WW11 and only 50 disgruntled women announced their return to England because of Canada’s high prices and housing and clothing shortages. Life wasn’t the romantic dream for Brit women who married a soldier.

Tens of thousands of Canadian soldiers had arrived and were turning the heads of young British women who were desperate for a distraction from the misery of war. No matter what year it was, the brides from any era were finally free to begin a much bigger journey. Good or bad—just like 90 Day Fiance.

Janice Shail sent me this: My mother in law is Patricia Crawford …this is her story:

My mother in law is a war bride who came to Carleton Place at the end of World War 2. When she came, she and many others arrived on a special train for war brides. She travelled across the ocean, arrived in Halifax, and got on the train Many stopped in the middle of nowhere and she remembered they let off a young girl with her suitcases and continued on down the track. Many times she wondered what ever happened to them.
She herself was just 18 years old and that is amazing to think about–to come to a country for the love of a young Canadian soldier. She is now 90 and her husband passed away awhile back— but the memories of the war are there for her too in so many ways.

January 8 at 6:57 PM  ·
My mother (Violet Jones) being a war bride, is pictured here enjoying her first winter snow experience in Canada. She married my father, Gordon Jones, who was serving in Europe and stationed in England during WWII. This photo was taken at my father’s homestead in Eccles Hill in the Eastern Townships. My mother didn’t have any winter clothing so she is wearing a pair of heavy wool pants that belonged to a male relative. This photo was taken in the mid 1940’s. My mother resides in Sutton where she and my father raised my brother and I. My mother will be turning 100 years old in August of this year.
See less 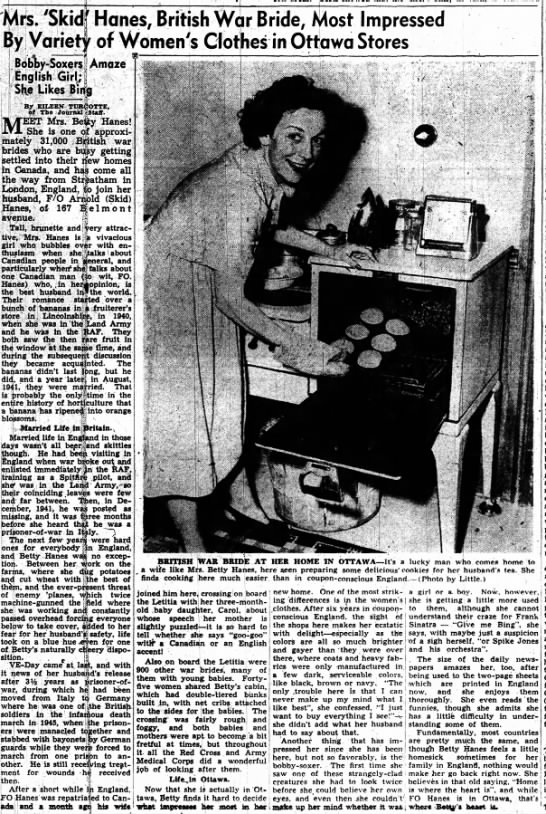