Reverend Michael Harris travelled afar setting up local parishes as early as 1819 in Lanark County, and St. Paul’s Anglican Church was one of them. Set in the midst of the original cemetery overlooking the Perth Highway, the church partially built in 1852 celebrated its 175th anniversary this year.

The mission of Lanark dates from 1819 when the Rev. Michael Harris began ministering to the people in the community. St. Paul’s was built in 1842 on land donated by Mr. James H. Manahan. A new parsonage was built by 1899 and renovated in 1906 at which time the church was enlarged.  It missed being damaged by the Lanark Village fire  in 1959 but was considerably damaged by fire in 1945 and while repairs were being made, services were held in the Congregational Church. The parsonage was sold around 1990.

It hasn’t changed much except for the small hall to the right that was built in 1964, but the belfry, porch, tower, sanctuary and vestry were added on in 1906. It thankfully escaped the Lanark fire of 1959 but it suffered fire damage to the roof and interior in 1945.

Their first organ was an old pump organ and then the United Church gave thenm mone that was powered by a hand pump. In 1953 someone willed the church their home and the contents and after the house was sold it bought Sr. Paul’s a new pulpit.

The cemetery in the churchyard was closed in 1917 and a new burial ground was obtained. St. Paul’s Church celebrated its centenary on June 28, 1942. The dead were buried strictly in the churchyards in those days, but back in 1917 local health officials requested that the original old cemetery built on the hill next to the church be closed and moved two miles out of town.  People worried about risks to public health and they came not only from the dank odours of the churchyards, but from the very water the people drank. In many cases, the springs for the drinking supply tracked right through the graveyards of the original churchyards.

Did you know suicides, if they were buried in consecrated ground at all, were usually deposited in the north end, although their corpses were not allowed to pass through the cemetery gates to enter. They had to be passed over the top of the stone wall or fence. In the case of St. James in Carleton Place they were buried outside the fence.

They once tried to ban the use of coffins altogether for health reasons, insisting that ‘all people should be buried in sacks’ for sanitary purposes. The Victorians recognized the dangers of lead coffins, and made it mandatory that pine be used as an alternative as it ‘decays rapidly,’ thus allowing the corpse to return to the earth more naturally. 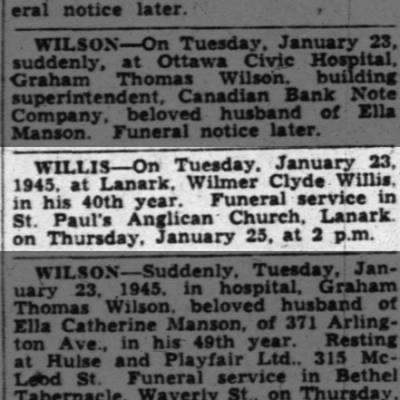 Sacred Heart of Jesus Church under construction about 1890’s, Lanark Village.
Drovers who transported the limestone for the above church from the W. C. Stead quarry.
Ken Potter

Where was the S.C. Stead quarry?
Blair T. Paul, Artist – Canadian and International
Great photos…where was the quarry? It was believed that at the end of Paul Drive, west of what used to be Playfair’s Planing Mill there was a quarry. We always called it that as kids anyway.
Ken Potter

Blair T. Paul, Artist – Canadian and International Interesting. I live at 121 Paul dr at the end of the road. It is possible that it was quarried out of the side of the steep hill next to what is now Centennial Truss. I know that is lots of limestone on my property.
Doris Quinn
My late husbands ancestors helped build this Church. Bringing the stones etc. At the time they questioned themselves thinking that soon their Church in Ferguson’s Falls would be closed and they would all travel over the hills to Lanark. And so it is. Understandable though as Lanark had a bigger population. Sacred Heart Church in Lanark opened in 1903.
My late husband, James Quinn was direct descendant of John Quinn, one of the seven Irish men who came over from Ireland in 1820. So yes I have always loved this type of history and have accumulated a lot over the years. Now to get it into the book I always planned to write. At it a bit each week.

The Old Church in Island Brook That Needs a Home