I have my great grandfathers checker table was at the Dack’s Jewellery Store in Carleton Place since they opened. During the depression, the other store owners on Bridge Street would come over and play forever on it. They certainly were selling anything!!! lol!!!

I have it in my garage and have no idea what to do with it. So i thought of you!!! Is this something you would like?

I almost fell on the floor as anyone who knows me knows I run a historical shelter for all things Lanark County. This table for anyone who is counting is 120 years old. I have given it a home and told Jane’s daughter Ava that if she ever decides she wants to have it just to call and come get it. It is such a family memento and I am eternally grateful to look at each day. 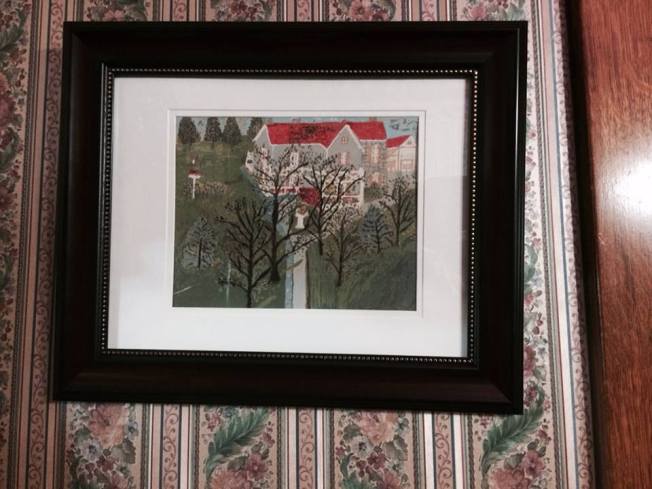 Just a few of my local treasures

Last year Blair White gave me a folk art oil painting that George Raeburn did of his and now my home The Morphy Cram House/ High Diddle Day home. George had given it to Blair a good many years ago. When I pass on I want it to go back to the White family and have Blair’s son Ben look after it until he can pass it on to his children.

The history of this little Queen’s Hotel guy is: it was given to Gail Sheen-Macdonald by her late friend Dennis Miller from the Queen’s. It once belonged to his father Bill Miller and graced the entrance of our beloved Queen’s Hotel when Bill owned the establishment. He used to have a wooden cigarette coming out of his mouth so I improvised, and the beer bottle he used to hold has been changed to a bottle of wine for Gail.

Sandy Baird gave me the late Carleton Place resident’s Joey Cram’s trunk. I can’t possibly tell you what that did to me emotionally. It’s one thing to write about people– but it’s another to own something that once belonged to that person.

The original Balderson cow in the background.. I called her Baldy Walsh– because her udders swing both way. One must have whimsy… 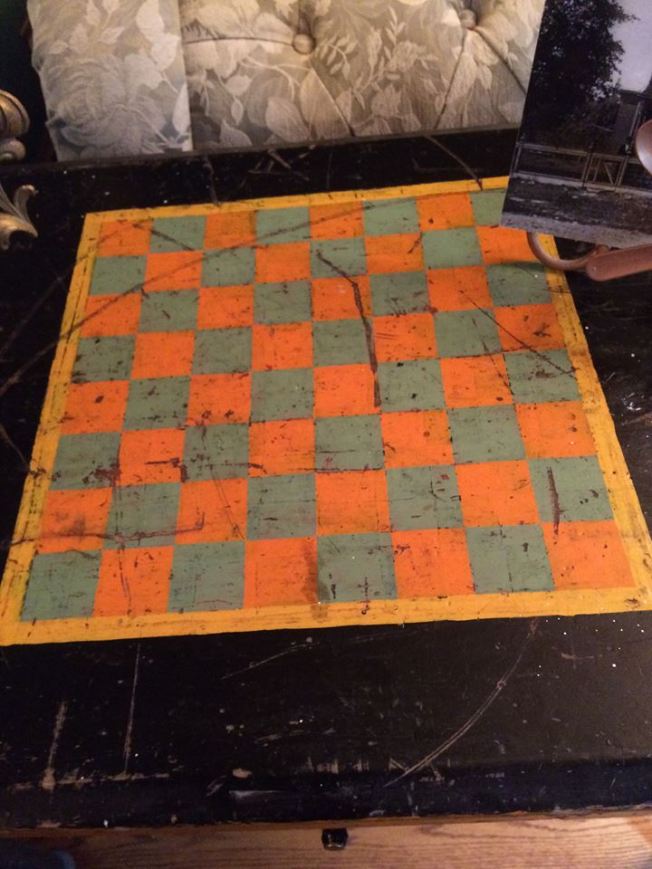 Checkers, or Draughts, are two different names for the same board game. One is more commonly used in England, while the other is most common in America. Curiously, in this case, it is the former colonies of England which uses the older name for this seemingly simple game. By the mid-nineteenth century, tournament-level checkers was played around the world, with the first world championship awarded in 1847. However, during the Regency, draughts was still mostly an amusing pastime which was enjoyed by many people, across all classes.

From what I have heard and read the menfolk of Bridge Street in Carleton Place loved themselves a good checker game.

George Leslie who once owned the Leslie/Comba building on Bridge Street was playing a game of checkers with another local merchant one day. A customer came in and paid 50 cents on his account as you could do that in those days. George, not wanting to be bothered never looked up and told the customer just to leave it on the checker board.

Just as the game was ending Reverend McNair of the Seventh Line Kirk congregation made his daily call  and approached the two gents playing with a big smile. Well that smile soon turned into a frown as George Leslie ending the checker game told his opponent quite emphatically,

With that George stood up and put the 50 cents in his pocket. It was said after that the the good reverend never visited the store again.

Thanks again Jane for the table. We are who we are because they were who they were.

The Dacks and the Mysterious Old Anchor

The Story Behind the Clock – Dack’s Jewellers