So what is the history of Black Rock?

The west half of Lot 20 Con 12 were acquired from John Riddell who had patented that parcel of land from the crown on July 21, 1831.   Thomas & Grace’s family consisted of 4 boys and 4 girls. John Thompson remained on the farm and during the early 1870’s the existing stone house was built by family members.  John and his family moved from the small log home to the stone house during 1873 .

John and his wife the former Mary Bain had 5 boys and 3 girls.  John’s second son, Daniel (D.J ) moved to a farm on the west shore of Taylor Lake while his sister Martha Jane and brother Thomas remained on the family farm.  D.J and his wife the former Mary Ann Aitkan raised a family of 9 boys and 3 girls.  One of the boys , Russell, married Mary Rintoul whose family had settled on the north shore of Taylor Lake.  After their marriage on May 19, 1938 Russell and Mary moved back to the family farm to assist Thomas and Martha Jane with the farming operation.  They remained on the farm and became sole owners on May 25, 1956.  A family of 6 girls and 5 boys were born during their marriage. 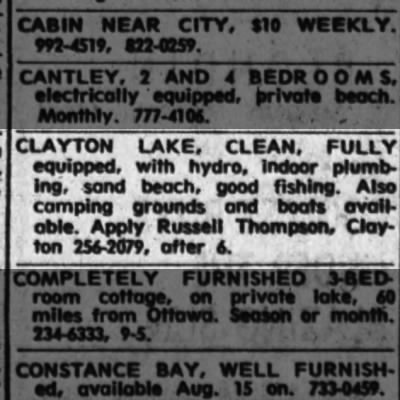 To help supplement the small farm income Mary & Russell decided to start a cottage rental business on part of the farm which bordered west shore of Clayton Lake.  This business was known as Thompson’s Cottages.  The first cottages were rented during the summer of 1964.  In 1965 a few campsites were cleared and the campground was born.The store was added in 1980 and at that time the business name was changed to Thompson’s Tourist Resort.

In 2002 the decision was made to incorporate the family farm & business to help ensure that the future Thompson generations can enjoy what the farm has meant to each of Mary and Russell’s children.  A new name was chosen and reflexes the history of the lakeshore where the neighbourhood children would swim and picnic in the years past.   Many family picnics were enjoyed at Black Rock on the shore of Clayton Lake and thus Thompson’s Black Rock Park was chosen.  We invite you to visit this piece of paradise with hopes you discover family values are still our most important asset.

The celebration was special with a clown, cake and wonderful presents from their friends grandparents and uncle and aunt but it went by so fast before they knew it everyone had gone home and it was time to wash up and get ready for bed.

2018!!-The Thompson family is celebrating 175 years on our farm in Galbraith this year. We are having a family gathering in August to celebrate. I was wondering if you would be willing to post a request on your page on behalf of our family. We’re looking to see if anyone in the community has old photos, stories, memories of Black Rock that they would be willing to share with us.

If you are willing, perhaps people could comment and I could reach out to them for more information (ex. copy of the photo). .

Thank you for your consideration,
Leann Thompson 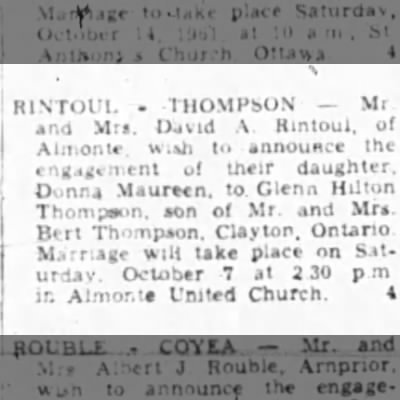 So Which Island did the River Drivers of Clayton get Marooned On?

The Old Community Hall in Clayton

Rocking and Rolling on the Spring Clayton Road