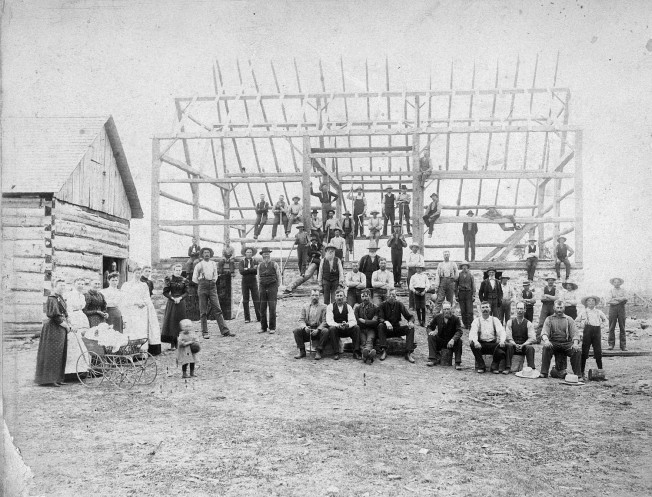 There was information written on the back of this photo but someone erased it. Still visible is: “Peter McTavish, Elmsley, Ont.” and “Cameron McTavish, Elmsley, Ont.”–his photo was found in an antique store in Perth, Ontario, in December, 2015. Brothers, Cameron & Peter McTavish appear in North Elmsley Township in the 1901 census, ages eleven and five, respectivley, but there is no proof they are in this photo (the names are a good indication, but not proof). Charles Dobie 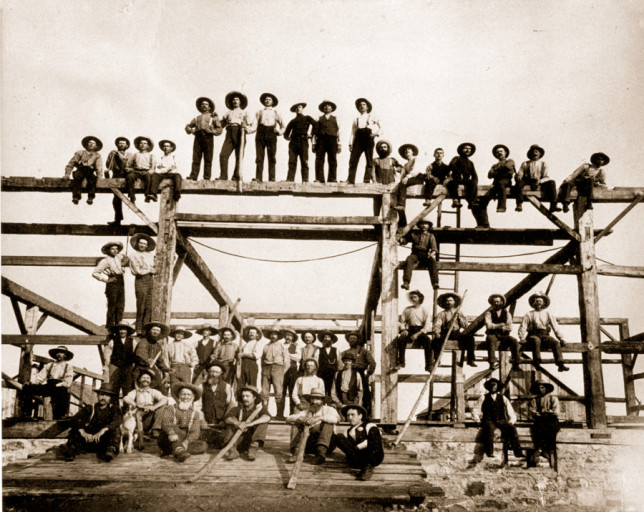 Photo from Bytown or Bust

In search of my McCreary-Magee-McGee Codd/Code Ancestors
in Lanark County, Ontario, Canada

August 9 1907–Mr. T. C. Arthur, Ramsay, had a successful “barn raising” last Thursday.
Some 55 men assisted in putting up the framework, the building being a very large modern, structure.

During that period new barns were erected everywhere, and, as saw-mills would not pay over twenty-five cents for the two first logs from a pine tree, the best of timber went into these. Barn-raisings were community events and whiskey was in abundant supply. I have seen half-tipsy men swarming all over the skeleton structures, but never saw a serious accident. At these raisings, the barns were christened like a ship at a launching, but whiskey instead of wine was used at the ceremony. Once, at a raising near Ancaster, I saw a man, bottle in hand, run up the peak where two rafters joined. There, balancing on one foot, he sang out:

“It is a good framing
And shal] get a good naming.
What shall the naming be?”

“When the prearranged name was shouted back the man on the rafters so declared it as he cast the bottle to the ground. Was the bottle broken? No, indeed! As it contained the best liquor supplied at the raising, care was taken to see that it fell on soft ground, and the moment it fell it was surrounded by a crowd of men, still thirsty despite the liberal libations already supplied.”