In 1969 Pine-Craft turned out 500 handcrafted reproductions of early Canadiana reproductions annually for Eastern Canadian furniture markets. Popularity of the pieces resulted in a  5-6 week backlog from the company of 5 carpenters of wood stainers. Ownership of the 7 year-old company had changed in 1968 when Ottawa businessman bought the business from a group of Almonte businessman. Mr. Cook operated all the Four Corners stores in Ottawa.

Recently, the staff at Pinecraft Limited, Almonte, gathered together to say farewell and thank you to Leister Jameison who retired from the organization after eleven years of service. Mr. Jameison was one of the original members when the factory opened, and began to manufacture early Canadian furniture reproductions. The staff presented him with a Pinecraft End Table. In accepting the gift, Mr. Jameison stated he had just passed his 85th birthday, and recalled he had been born in a granary out on the North Dakota prairies. He expressed his happy years spent at Pinecraft, and how he had watched the firm grow from its early years. 1974 Novemeber

MR. JAMES SNEDDEN – The community was deeply saddened on Christmas morning when word was received that James Snedden had passed away in his sleep at his home, 149 Mitcheson St., Almonte, in his 65th year. He was the son of the late William Snedden and Jennie Toshack. In 1941 he married the former Eliza Irene McCann of Pakenham. They lived on the 8th line of Ramsay until a year ago, December 19th, when they moved to their new home in Almonte. When ill health compelled him to give up farming he was employed by Pinecraft Ltd., Almonte. He was a faithful member of Blakeney United Church serving as treasurer and as a member of the Session for a number of years. Besides his wife he leaves to mourn, one son, Bruce and a grandson, David Snedden of Ottawa; three brothers, Wilfred of Almonte; Jack and Alex of Ramsay; one sister, Jean, Mrs. Connor Sutton of Renfrew. One sister, Isabel, Mrs. Arthur Blakeley, predeceased him several years ago. The funeral was held on Wednesday, December 27th, from the Kerry Funeral Home, to Almonte United Church for service conducted by Rev. H. F. Skoutajan and Rev. W. L. Henley of Carleton Place. Pallbearers were six nephews, Bill and David Snedden, Bill Sutton, Hugh Fulton, Earl and Sandy Snedden. Interment was in Auld Kirk Cemetery. 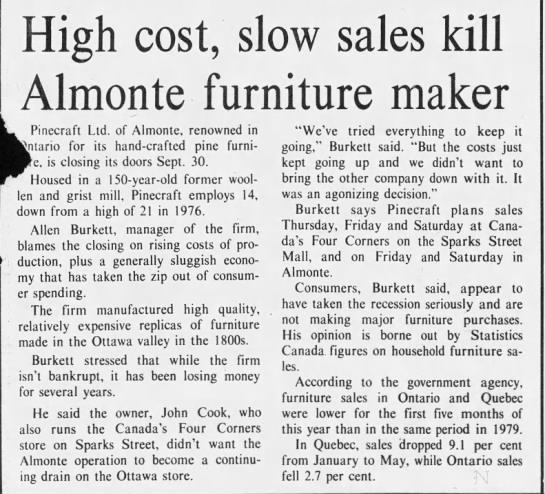 Antique Furniture? The End of an Era?