The long narrow outlet was Nat McAllister’s bike repair shop and later became a candy shop. The building at 122 Bridge was more than likely affected by the 1923 fire at The Golden Lion store next door, so it has either been rebuilt on account of that and since then has remained virtually unchanged except for the windows on the second storey and the addition of the area between 120 and 122 Bridge Street.

Originally this building was the site of a cooperage operated by Mr. Burke and eventually
became the property of William McDiarmid. Murray O’Dell moved to town and set up an appliance shop in the larger building. Bob Flint became his second in command and he took over the business when O’Dell married Doris Munshaw and left town. Onna Culberton Archdeacon who had been an employee moved the business of O’Dell’s to 73 Bridge Street where The Eating Place is today.

The Carleton Place area photo posted is from the Porteous family collection. It was one that Pat Allan’s Mom, Muriel (nee Porteous) James, took when she was stationed near Ottawa while in RCAF (WWII) Pat Allan.. Looking for names.. Downtown Carleton Place–I see the Philco sign of Flints and the Billiards sign and the Keyes building

Before Williams operated his butcher store at 124 Bridge Street, a tea store was
housed in this building. McDonald’s tea store sold a great variety and selection of
teas. In 1897, B.Y. Williams moved his butcher shop from the opera hall block to the
Burke building next to the old Duncan McDiarmid store. In 1898, Moore Knowles bought out Williams. In 1899, Olmstead and Stanzel bought Moore Knowles butcher shop. In the same year Williams opened his shop next to Mitchell and Cram.

In 1918, Williams returned to 124 Bridge Street to conduct his butcher shop business. Later it was run by his son C.Y. Buzz Williams. Some of the employees were: Maurice Pommerville, Willis Armour, Mervin Devlin, Susie Rothwell as well as John and Peter Williams. Buzz and his wife took over the store for some time but later Joe Kleibor and Mr. Bernicky of Smiths Falls ran the butcher business for a period of time.

124 Bridge Street remained in the Williams Family until 1971 when the building was sold to Ken Young. In 1967, the Young’s (Ken and Joy) began their operation of Young’s Variety leasing the premises and for 22 years conducted business at 124 Bridge Street until 1989, when the couple retired from business. Some of their employees were: Frances Smith, Peggy Johnston and Marg Smith. Later it became a sports store, a pizza parlour and in 2006 a Tai Chi Studio is in operation at 124 Bridge Street.

The property at 126 Bridge Street belonged to the Burke Estate for quite a number
of years before ownership passed to Lloyd Tetlock. In 1918, Tetlock bought the
building from Burke at 126 Bridge Street. Tetlock ran a plumbing and tinsmith shop.
Osie Hastie began working for Tetlock in 1923. Upon Tetlock’s death in 1945, Osie
and Roy bought the business. Roy retired in 1971.

This is someone I am proud to call a friend– Ken Hastie.. He is a part of Carleton Place history and he is also one of the hearts and souls of St. Andrews.. He is my granddaughters great grandfather and isn’t feeling so well these days.. Please keep him in your thoughts and prayers. Get well Pappy so we can talk about Carleton Place history again.. Sending love to you big time.

The sons of RoOssie Hastie kept the business going for a short time. In 1989, Hastie Bros. moved from their Bridge Street location after serving Carleton Place for 44 years. Mr. Hastie took over the small store next door which had been the hair salon of Edna (Wright) Curtis to have more floor space for displays.  Gerald and Ken continued the business for a short time and Gerald ended up moving his business to Campbell Street in 1959. Hastie’s continued to own the building until 1999 when it was sold to Ferguson who then sold it to Van Zetten.

Goin’ Shopping at The Tetlock Bros of Carleton Place

There must have been a fire in the early 1900s and this building seems to be reconstructed. Assessment rolls had Dr. Switzer at this location renting
from William McDiarmid. 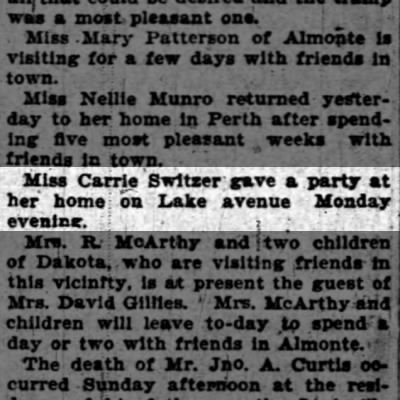 Marg Whyte recalls that Mr. White was the first person to live in this building but he does not take ownership until 1920.One of the first mentions of Dr. Switzer pharmacist is in the 1876 Assessment Rolls.
There is an advertisement for Switzer and Bros in an 1883 edition of The Carleton
Place Herald. The first family to occupy this brick building was Robert White and he operated a taxi business. They were a large family consisting of Mrs. Stunden,Mrs. Carrie Grove and Edith White. The boys were: Jack Everett and Guy.

Clipped from The Ottawa Journal, 04 Jan 1974, Fri, Page 43 CLICK on whole article to read all about local photographer Ernie Foote–

The other side of the building was rented to Ernie and Anne Foote who ran a photography shop. Ernie Foote photographer took school photos and was responsible for distribution of an Ottawa paper.

Jim Amy Kirkpatrick said: “He was my uncle and yes the optometrist was was in his building. I used to watch all the parades from upstairs.”

Nancy Hudson said: He took all the school photos and then they would be displayed in his store windows.

Howard Little ran a barbershop there later and then it was rented to G.B. McDonald an optometrist for a number of years. Bruce McDonald was an optometrist in one half of building. Then Ernie Foote retired and Howard Little ran a small barber shop there and it later rented to G. B. McDonald.  Bruce McDonald took over the entire building and when he retired and left Carleton Place Dr. Ian Edmonson took over.

The Sam Dunfield building had two recessed entrances as well as another door leading to the upstairs living quarters. Mr. Dunfield ran a bottling works and manufactured them after buying the business from A.R. G. Peden.

These were put into stone bottles with a spring cap and the most popular ones were Cream Soda and Ginger Ale. Their daughter Agnes was the social correspondent for the local paper and Pegg (Flegg) worked for Matthews Furniture store.

Elmer Doyle later on ran an eatery on the side next to the Queen’s and called it The Blue Spot. Sometime after that the town rented both of these outlets and made them into public washrooms but on account of vandalism this was discontinued. William Miller  and his wife Marguerite Griffin purchased the building and also became tenants. There is a photograph of this store at the National Gallery but is not viewable.

Read in the series

What Didn’t You Know? The New Town Hall August 1897

Community Facts You Might Not Know About Carleton Place for our 150th Birthday – Part 7– It was 1957!

Community Facts You Might Not Know About Carleton Place for our 150th Birthday – Part 9– It was 1903!