A lad who first saw the light of day in County Antrim, Ireland, in August, 1800, ventured across the raging Atlantic when only 17 years of age, unaccompanied by a parent or any near relative. When he put foot on Canadian soil he was a total stranger to all. Listen while we tell you w hat has been the outcome of this Irish lad.

His first abode was in Montreal where he worked for three years. Then he came into Upper Canada, passing through a place which he affirmed had but two houses, and which is now the capital of the Dominion. Through the latter place he proceeded on to the township of Beckwith where he remained for several years.

Later a young woman arrived from County Wexford in his own native land, and at the village of Richmond they were united in holy wedlock. The ups and downs of a wilderness life was their portion, but being well equipped with health and strength, perseverance and honesty, they were equal to all the trying emergencies and made a success of life.

Samuel Patterson and Elizabeth Upton were the happy young couple, and in 1842 they moved to Oxford township to spend the remainder of their days. To them were born ten children, five of whom are still living, whose names, ages, number of children and grandchildren we give below :

Benjamin Patterson, Burritt’s Rapids, aged 60; 14 children, 1 of whom is dead.

Samuel Patterson, Kemptville, aged 55; 11 children, 7 of whom are now dead.

It will thus be seen that the descendants of this one Irish lad were 10 children, 69 grandchildren, 42 great-grandchildren, or a total of 121 people. When the Sickle of Time cut off their existence the grand sires were well advanced in years. Mrs. Patterson departed this life on Dec. 22, 1883, at the age of 82 years, and Mr. Patterson on Sept. 18, 1887, aged 87 years.— 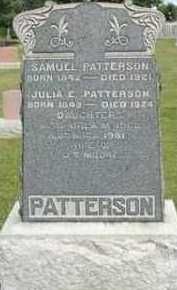 Searching for Information: J.A. Stevenson and Robert and Jane Ross of Lanark

Searching for Information– Teddy Bears Made in Carleton Place?

Looking for the Watson’s of Lanark County I Presume