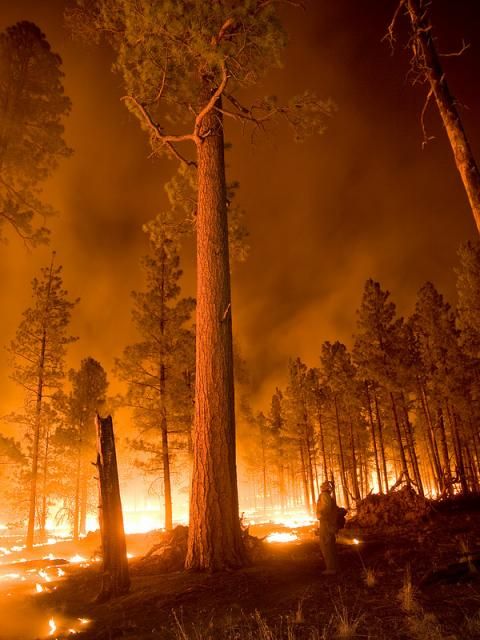 The bush fires were everywhere in the year 1897 due to a period of dry weather. I read lots of accounts of numerous fires in the Ottawa Valley as well as on the Quebec side. It was truly a perilous year.

Bush fires have been raging in Darling for nearly two weeks and are doing considerable damage. The fire started on the south side of the river on the boundary line between Lavant and Darling. It originated from a haymaker’s fire which was supposed to have been quenched but was smouldering underground.

It has already extended over an area of six square miles, destroying four hundred acres of wooded land belonging to the Merchants Bank, Perth, and the timber limits of Messrs. J. & J. Herron and T. B. Caldwell. Mr. Larocque, who lives on that side of the river, has lost one stack of hay and Mr. J. A. McFarlane has had great fears of his, though he has so far been able to save it.

On the north side of the river Messrs. J. & J. Herron’s lots on the boundary line have been completely destroyed. Mr. John Stewart, of Waba, who lost his shanties and equipment some time ago by incendiary fires, has been, further victimized by the destruction  of the best of his limits lying along  the boundary line by ares of a similar j origin.

Our informant was an eyewitness of the struggle which *Mr. Thos. Elliott had to save his property  on Thursday last. His premises were completely surrounded by fire and it was only by the most careful watching that the fire was kept under control. Fire was first noticed in a pile of corn husks about forty feet from the house. Immediately after this was extinguished fire was noticed right at the door of the barn. Hardly was the second blaze subdued before fire was again noticed beneath a sloop a few feet from the barn.

While fighting the fires a spark alighted on *Mrs. Elliott’s shoulder and before she was aware of it, it had burned a large hole through her clothing. Mr. Jno. Caldwell, of Darling, had much difficulty in saving the building on his lower lot and despite the best efforts of those fighting the fires three stacks of his hay were consumed. Four or five hundred acres of land belonging to Mr. Jno. Murray, jr., were swept over by the fire and on Friday night four or five acres of the line fence between Messrs. W . C. Craig and P. Foy were destroyed.

On Sunday fire broke out near Boyle’s bridge and was spreading rapidly. The heavy rain, however, should check the progress of the fire and bring relief to the anxiety of those whose property was threatened 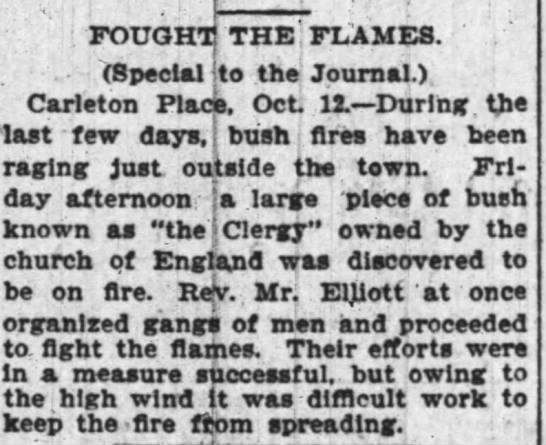