A rather queer occurrence is reported from Odessa, twelve miles from Kingston. In the house of William H. Smith, fifth concession, Ernestown, there is a bed which on Sunday morning commenced to move about in a singular way, throwing off the bed clothes and turning over on the floor.

As soon as the things were replaced the occurrence was repeated and still continued. A bible was placed upon the bed, but after a few upheavals the bed failed to dislodge it, and did not tumble over that time. Mr. Smith slept on the bed Sunday night, being shifted to and fro but not thrown out. When he arose in the morning the bed again wriggled and tumbled over. A correspondent interviewed Mr. Smith and vouches for’ the truth of the occurrence, regarding which no explanation can be given.

Author’s Note– After reading some of the classifieds from the Upper Canada Herald, I would assume it might be the ghosts of wives gone bye..:)

All persons are hereby forbid trusting Abigail, my wife, on my account, as she has been delirious for several years past, and has certainly forsaken my bed and board, as I am determined not to pay any debts of her contracting after this date 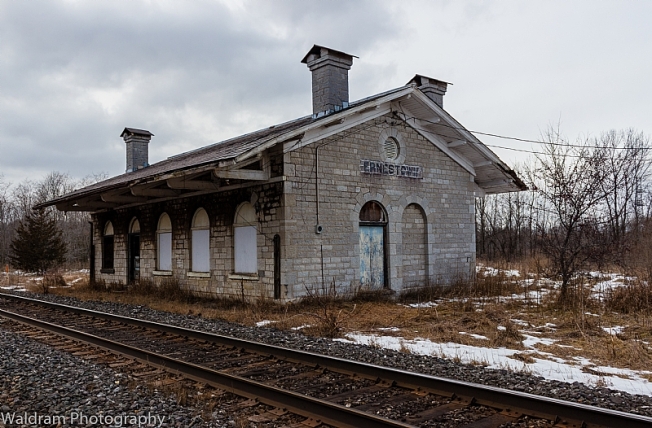 Ernestown railroad station was built for the Grand Trunk Railway Company of Canada. Its cornerstone was laid in 1855

Ernestown station sits on the north side of two sets of still-active tracks, just west of Lennox and Addington County Road #4, near a little sideroad called Link Road.

It has been suggested that political factors were the reason the Ernestown station was preferred over more populated areas like Bath to the east. Unlike Bath, there was no real community in Ernestown.

After the station was built, a community developed. At the same time, Bath, without a station, declined. Today, with the station abandoned, there are only residences left near the station and no real community.

Does Your Chewing Gum Lose its Flavour on the Bedpost Overnight?

The Bed Bugs are Jumpin’ in Carleton Place!