Daniel Muirhead entered McGill University in Montreal in 1885. In 1899 he graduated with an M.D. in medicine and became house surgeon at the Montreal General and Maternity Hospital 1889-1890. He served for sometime as a ship’s doctor and finally settled into private practice in Carleton Place.

On July 19, 1912 he journeyed with Norman Cram in his new top heavy Ford Runabout to visit with one of his regular patients. While attempting to pass a farmer hauling a load of hay on a small hill Dr. Dan’s front wheels caught in a rut on the rough North Gower road. His car toppled over and he was instantly killed at 46 years of age. (newspaper article says age 50)

“Quiet,skilled to an unusual degree, beloved by every person who ever met him, a valiant conqueror in a sick room–his loss is personal to all and a disaster to his profession, his town, and his country. His mother, sister and brother  W.J. survive him.”

Brother William married Mary Gillies and took over the family home from his mother who had moved to another house she owned close by. Later on she went to live with her daughter Mrs. R.E. Box. Bill, as he was known as owned and operated a hardware store on Bridge Street in Carleton Place. He was a gentlemen, a school trustee and a leading citizen of Carleton Place, and at age 19 he became checker champion of Manitoba in an open competition. 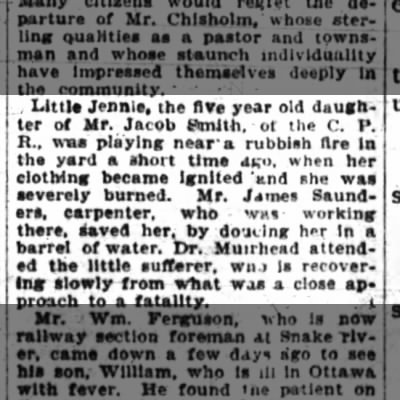 The Saga of a James Street Home— Christina McEwen Muirhead