Compared to some of our older cemeteries that are literally decaying before our eyes the Middleville pioneers can  rest in peace. Have you ever driven to Middleville and seen the 25 original headstones inlaid into a flowered bordered tribute adjacent to Trinity United Church? While not part of *Lanark’s 7 Wonders just looking at them you can practically hear their 19th century stories. The headstones cover a 26 year old period from 1851 and located over the original grave site.

One marker of note covers three graves. They are the Affleck children: Agnes age 7 and her sisters Jane and Elizabeth 4 and 1 who all died in August and September of 1856 from either diptheria or scarlet fever that swept Lanark County that ye 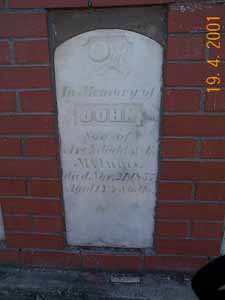 Like the St. James Anglican church cemetery in Carleton Place that removed their hand water pump  Middleville too worried about seepage of contaminated graves from the old graveyard into the town’s well water. Middleville decided to move their cemetery to the Greenwood Cemetery in the 1870s.

Several of the plots were dug up and the remains transferred to the new site. Over the years the old site fell upon hard times and in the 1930s they tried to clean it up but they stopped fearful of damage to the crumbling markers that were now buried under the overgrown grass.

In the 1960s Mrs. Jesse Stewart Gillies funded the reconstruction from a request from her husband David Gilles that the founder’s Headstone James Gillies be restored. His headstone dating back to 1851 was the oldest in the cemetery. James had come from Scotland in 1821 at the age of 55 with his wife and children. He established a sawmill near the village shortly after it was founded in 1820 as part of the Upper Canada district of Bathurst.

Borrowing the idea of the monument idea from Upper Canada Village the work was completed in 1971 and an official ceremony dedicated by former mayor the late Charlotte Whitton was in 1972. If you have never visited this Lanark location you are missing part of Lanark’s great history.

*The Seven Wonders of Lanark County 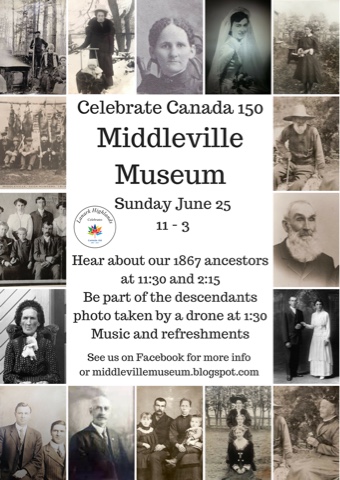 Lanark Township (Highlands) descendants of our early settlers (and those who wish they were😉), join us on Sunday June 25 at the Museum for our Canada 150 descendants group photo. Stephen Dodds will be there with his drone to get several group photos at 1:30. David Murdoch will speak about his 1867 ancestry quest at 11:30 and 2:15. We will have copies of David’s research for those who are interested. This will be a great chance to catch up with friends and neighbours. Refreshments will be served. We hope to see many of you there.

In Memory of the Very Few–Adamsville Burial Site

The Oldest Cemetery in Drummond

So Who was Buried First in the Franktown Cemetery?

The Forgotten Cemetery at the End of Lake Ave West