I have a request and need your help

I am wondering if you would have ever come across a professional wrestling night at the Carleton Place arena in the 1970’s. I can remember that there was a live bear. And I would just like to know an approximate date and who wrestled the bear.

Terrible Ted (born 1949 or 1950 was a Canadian American black bear, known as a professional wrestler. He wrestled for various North American promotions from the 1950s into the 1970s.

My daughter-in-law Stephanie Seccaspina said it was her uncle Randy McGonegal wrestled the bear at the Carleton Place arena.. and he still has the news clipping. She said she would get him to call me to update this. Stay tuned.

Tom Edwards-Bennie and Billy McGuire Ask and you shall receive Linda Seccaspina. We were there at the wrestling that night. The whole family. My father loved wrestling. When the bear was wrestling, my mom and my sister became the main event. My poor mother was terrified that the bear was coming into the crowd. She grabbed my sister and hauled poor Sue Edwards over probably three rows of benches. Mother wasn’t fooling. She bailed. Jim Edwards Sue and I laughed of this often.

Bennie and Billy McGuire Ask and you shall receive Linda Seccaspina. We were there at the wrestling that night. The whole family. My father loved wrestling. When the bear was wrestling, my mom and my sister became the main event. My poor mother was terrified that the bear was coming into the crowd. She grabbed my sister and hauled poor Sue Edwards over probably three rows of benches. Mother wasn’t fooling. She bailed. Jim Edwards Sue and I laughed of this often. 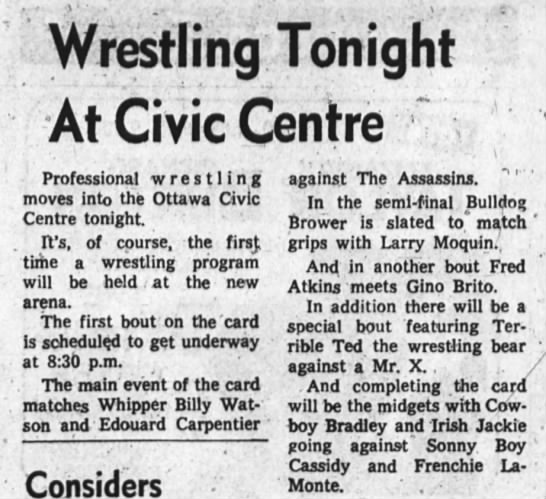 On July 13, 1966, McKigney offered $3,000 to anyone who could pin Ted. The challenge was accepted and met by John Szigeti (a 36-year-old welder who wanted the money for truck repairs), who pinned Ted “for maybe 15 seconds” before McKigney pried him free. McKigney and promoter Howard Darvin refused to pay the prize, so Szigeti sued them in May 1968.


When I was five, my dad had a wrestling bear living in a cage under the back porch steps. I’d let my ice cream drip on my bare toes and dangle my feet between the wooden steps so the bear could lick it off. Us Hart kids thought that was pretty cool. I figured it was a good way to keep my feet clean and it kind of tickled, too.

It just so happened I was invited to the next-door neighbour’s birthday party, which was going to be held at CFCN on a kiddie program called The Headhunter Show.

I’d never been to a birthday party or been on a TV show, so I was hyped when I got on the set and took my seat on the bench.

Suddenly, out from behind the curtain came Terrible Ted — the very same bear that lived under our porch.

The bear handler scuffled around with Ted just long enough to amuse us kids.

Some were scared but not me. Heck, me and Ted were practically on a first-name basis and he no doubt appreciated the ice cream drips.

By the end of the show, Headhunter, the host, came around interviewing various kids. When he came to me, he innocently asked: “Wouldn’t you like to have a bear like that in your backyard?”

I matter-of-factly told him: “I already have a bear like that living in my backyard.”

Well, he kind of winked at the camera and chalked it up to the overactive imagination of a five-year-old boy. This was all the opening he needed to have a little fun, as I found myself pleading with him to believe I really did have a bear just about that exact same size living at my house.

He had some more fun with me and when the show ended, I felt really annoyed nobody believed me.

I remember getting home only a few minutes later, since CFCN was so close, and my mom gave me a big warm hug and smiled: “Aw dawling, no one ever believes me when I tell them what goes on around here either!”

You might be wondering where the heck I’m going with this. Well, I wanted to tell you about Buck Shot, which is the show that replaced Headhunter.

I was at a Flames game a few weeks ago when the happy-go-lucky face of Buck Shot himself, Ron Barge, appeared on the

Jumbotron. Dick Clark’s got nothing on Buck Shot, who looks the same as he did 25 years ago.

While I was leaving, some drunk spotted me and, in quite a dissing give-me-a-break tone, he pointed and bellowed: “First Buck Shot and now The Hitman!”

I wanted to respond with a wisecrack but as I made my way to my truck, I realized it was a huge compliment to be seen in the same light as Buck Shot.

For kids to have heroes is an important thing and I always took that part of my job seriously. I always took great pride in knowing if young kids were watching The Hitman, they were in good hands.

I met Buck Shot many times over the years, mostly when I was a kid hanging around CFCN and he was always as gentle and kind as he was on TV.

Author’s Note– It killed me to see this poor bear being wrestled. Thank goodness this no longer happens:(