A True Story from the Newspaper Archives 1897

When Miss Rippledeane married Mr. Baldwin in 1897 he was a widower. The marriage hit the skids pretty quickly and Mrs. Baldwin brought suit for divorce. It must have baffled the lawyers and judge as the grounds was because a ghost of former Mrs. Baldwin, his first wife, insisted on still jointly sharing the house and interfering with their matrimonial happiness in spirit.

Mrs. Baldwin insisted she was once a cheerful healthful woman, and now she was in a nervous frame of mind altogether owing to the ghostly persecutions of her husband’s former wife.

Apparently the former missus was waiting for the new missus the day they got married and the new bride saw her standing in the doorway dressed in white waiting for the new couple. The new Mrs. Baldwin asked her new husband who the lady was and he said he saw nothing of the sort. She thought he was jesting and upon giving the description of the ghostly vision the maidservant gave way to emotion declaring it was none other than the dead wife herself, Rosamond Baldwin.

Since that initial encounter the ghost followed her wherever she went, pinching her, pulling her hair, and causing her to cry out in front of guests. To collect further evidence she called for her sister Miss Anna Rippledeane to come visit, not telling her that the former Mrs. Baldwin was still calling her former residence home. One day Anna screamed in fright insisting that she too saw the lady in white. She made her new brother-in-law search for the ghost under the bed, which was futile.

In Mrs. Baldwin’s suit she claimed she once overheard her husband begging: “Rosamond please go away and leave him in peace”. Upon being interviewed Mr. Baldwin refused to speak about the incident. But, the divorce suit was brought forward and will determine whether Mrs. Baldwin is entitled to a divorce and whether Mr. Baldwin is creating bigamy by having one under the quick and even the dead.  if the divorce has granted Mr. Baldwin has assured his current wife that he will not marry again. 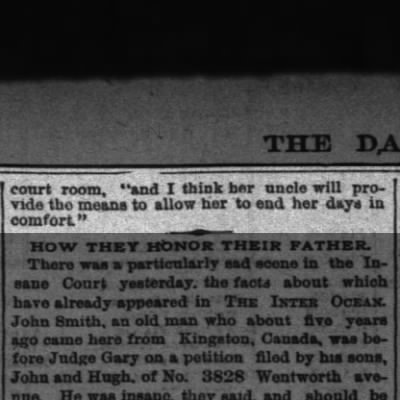