Site of the big lumber mill

A fire was discovered in the lumberyard of Mr. Peter McLaren about nine Tuesday night. At that time it was so small that it might easily have been quickly extinguished had the water been convenient.

The fire began in the extensive piles centre of dry lumber and it rapidly spread in all directions along with a section of ties and rails of the Canada Central Railway. There was scarcely anything could be done to stop its progress. Mr. McLaren telegraphed to Almonte, Arnprior, Smith’s Falls, Brockville and Ottawa, for the assistance of fire engines, and these places responded as quickly as they could.

The Almonte engine was drawn up with horses, their men being too anxious to wait the arrival of the train. They also had support  from hundreds of local Carleton Place citizens helping where they could. The quantity of lumber in the yard, before the mills began cutting in the spring was roughly estimated at 13,000,000 feet, worth at the very least $100,000. 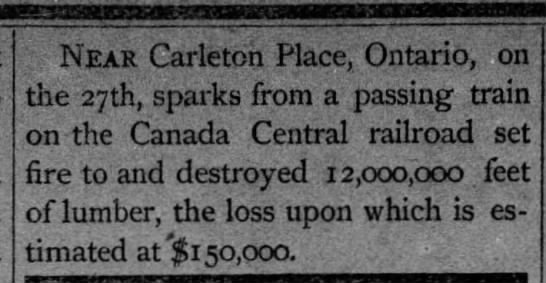 Nearly the entire yard was swept with fire, only a few piles being left standing at one end. Several houses, one owned by a section man were burned. The lumberyard was all but reduced to ashes and the engines remained over night to watch the burning debris, but their services were not required. Mr. McLaren only had insurance of $50,000 on his lumber and the loss was severe. The fire was supposed to have originated from sparks from the express train going north at noon.

The fact the fire broke out on a windless day was a good thing or the entire town of Carleton Place would have been destroyed.  A lengthy business depression placed severe limits on the country’s prosperity.  Western migration of the district’s sons continued, and began to reach the new province of Manitoba. Canadian courts determined that the blaze had been kindled by sparks from a passing railway engine, but the CPR appealed and the matter was not settled until the Privy Council in London held the railway company liable. The lumber firm’s loss was recovered from $50,000 in insurance and $100,000 in damages paid when court decisions holding the railway company responsible were upheld five years later in England.

The Carleton Place Herald says:  By odds the most destructive fire which has visited Carleton Place was that of Monday afternoon, barring the destruction of the McLaren Lumber Yard in 1879.

The “Chosen Friends” of Carleton Place –The Fire of 1904