“I just can’t get it through my thick head why they are closing a plant equipped to produce like this one.” Don McNeely who had worked at Findlays for 33 years.

“It’s always been a good life here- I don’t know where I am going to get a job-there are a few possibilities.” Mr. Lowe

There were only about employee 125 cards left beside the time clock where there were once 200. The protests of unions, the public meetings, the anxious intervening of politicians, and the uproar in the House of Commons are finished. And so is Findlays.

“We were going to get another deck, but that’s out”, joked one man looking at the worn out one.–anonymous worker

“There’s a sentimental attachment to the place and to fellow workers but no one is going around crying”.–anonymous worker who had been at Findlays for 16 years.

“They’re proud, independent,and resigned to the loss of their jobs. It’s management’s democratic right to close down the plant.”–anonymous worker

“I did some bricklaying work once, but it took forever to do the calculations.”-Milt who never finished Grade 6 and planned to return to school.

“The only jobs you can get are ones nobody else wants. Who wants to work for $1.85 an hour.”-Alfred, an immigrant who had worked for two years at Findlays. (Findlay salary was $2.16)

“There is some possibility that the enamelling department could continue to do custom work, but we don’t know where the money would come from to finance the operation.”- Gerry 14 year veteran of Findlays

“It’s almost as if they bled this company dry to keep the other going.”  (Montmagny Plant) Gerry 14 year veteran of Findlays

Mr. McNeely was considering a job in Smiths Falls but he didn’t know if he would take it because he didn’t want  to do all the highway driving.

“There isn’t much work here in town and I don’t want to travel”.–Woman who worked in the electrical assembly department for 16 years.

“Maybe things will get better–we’ll have a big party at the end. But, it’s going to be terrible not working.”– another Findlay veteran.

The prospect of years filled with comforting routine finally faded at Findlay’s and all that is left is an empty field.

Found by Bill Russell… thank you

The Findlay Brothers buy the land on High Street–Clipped from The Ottawa Journal, 19 Jan 1901, Sat, Page 4

Bill Russell posted this— Yes Linda these were made at the plant on the town line. The pucks were presented to the CJOH No Stars Hockey team at a charity game held at C.P. Arena March Our team was The Findlay Outcasts. Lol

Llew Lloyd– Before the Findlay brand of pans were marketed, the men in the moulding shop used to make them on the side for home use. There are still some of them around. They are unlabeled and don’t have the same finishing as the ones produced for sale to the general public .

Bill Russell– There are also some that were reproduced at the Findlay plant on Townline that can be identified by a ditto gun label gun that was attached to the pattern prior to moulding. This was a date code.

Carleton Place and Beckwith Heritage Museum Photo
Deputy Mayor Jerry Flynn came to our Christmas Open House and found his father Clifford in this painting of workers at Findlay’s Limited! You never know what (or who) you’ll find at your local museum! Visit us soon!

Carleton Place and Beckwith Heritage Museum–‎Findlay Plaque Unveiling 2014– Have you seen the Findlay Plaque on the old Patterson building across from the town hall? 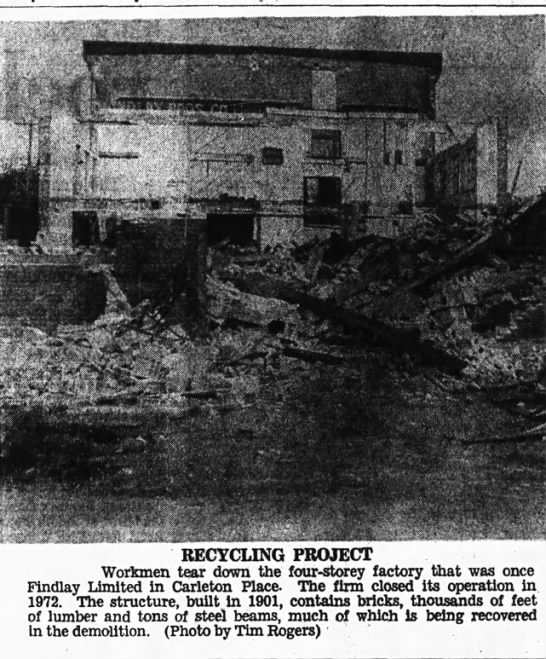