The phrase “Number please” will never be heard again from a telephone switchboard operator when making a phone call. At least that is what my Grandmother would tell me over and over again as she sat in her rocking chair on Friday nights. Every Friday night we would both sit inside the screened porch and watch the folks coming out of the South Street Liquor Store and Varin’s Pharmacy in Cowansville, Quebec.

Friday night used to be the time you cashed your weekly paycheck, did your groceries, and talked about the weather to anyone you bumped into. I would have rather talked about Ricky Nelson and Paul Anka, but the topics of conversation on that vernadah was always about something everyone loved, but had just disappeared. It seems the day the switchboard telephone operator vanished was something that should never have happened in my Grandmother’s mind, but in reality; it was probably because she never had the opportunity to have made the final decision.

I remember the day my phone number 1386 disappeared like it was yesterday. One morning I got up and was ready to tell the operator to call 32 which was my Grandmother’s number and all I heard was a dial tone. I guess I too was not happy that I had not made the decision either, as I immediately missed their kind and reassuring voices.

One Friday night a former telephone operator chatted with us how the town of Cowansville was going to regret getting the dial tone. This lady who shall remain nameless was carrying a recent purchase from the Liquor store and asked my Grandmother for a glass. I knew right then and there we were in for a long and vivid conversation.

Not only were these operators responsible for getting your call through but they also looked after telephone bill payments. Sometimes they even had to multitask and recognize the sound of coins being dropped outside in the pay phone booth. According to our guest she could hear a nickle being dropped a mile away and she still remembered who was always late paying their bills in town.

The volume of her voice went up a few octaves in anger as she said if had not been for the operators more places would have burned down when fire emergencies were occurring in Cowansville.  I really wanted to interject at that point of the conversation that maybe the gals shouldn’t have given out random emergency information when every “Tom, Dick and Jean Guy” called asking what was happening. In my opinion these gals should have left their phone cords dangling with a “nevermind”.

But when those calls came in these telephone operators were actually the first responders calling the firemen and making sure they were on their way. Medical and family emergencies were high on the operators list too and they would have to track down the local doctor or any person needed in an emergency.

Of course at that point my Grandmother interjected with a story I had heard a 100 times and everyone had repeated this story since it had been published in The Granby Leader Mail in 1936. Each time I heard it something new was thrown in, or something was left out and it became the story that kept on giving.

The sun rose and shone on Cowansville’s Dr. Cotton and he could do no wrong even though his wife was thrown under the bus a few times by other women in conversation. I just think these local women viewed him as some sort of a rock star, and when my Grandmother mentioned his name our visitor put her bottle on the floor, wiped her forehead and let out a big sigh.

Dr. Cotton was one of the first local users of the telephone as when he was out of the office he needed to be located for emergencies. The story as far as I have pieced together was: one day an elderly woman came into his office and Dr. Cotton’s wife said he was out but would “ring him up”. Of course the elderly woman was not familiar with the telephone and immediately left in fright as fast as her feet would carry her.

Not knowing how to handle the situation the woman ran to her nearest friend’s home and said Mrs. Cotton’s mind was gone as she had been acting odd. She told her friend about the doctor’s wife who had a wild look on her face speaking into a wooden box that had noises like sleigh bells. Not only that, the doctor’s wife must be able to read her husband’s mind, as she had responded to the woman that “he would be right over”. Something needed to be done right away about Mrs. Cotton’s condition she insisted before she hurt poor Dr. Cotton.

What the woman did not know was that when you cranked the side of the telephone and lifted the receiver the signal went into the switchboard and the line would buzz. A plug would be then inserted into the line and a familiar voice would say “number please”.

Near the end of the story my Grandmother’s visitor would interject whatever she could in the loudest voice you have ever heard. My Grandmother told me later the woman had “a strong voice” as that had been her profession for years.  You see nothing was done with a faint voice at the telephone company, and they often had to yell to make themselves heard.

Soon after the story ended the woman left quickly as heat lightening began to appear in the night sky. She admitted to us both that electrical storms rattled her.  I can remember as a child hearing the crackles and pops on the other end of the telephone line and sometimes those poor operators would not only get those noises, but also get a blast in the ear from the thunder and lightening.

Sitting on the verandah Friday nights was one of the best times of my childhood with the many visitors who sat a spell and shared stories.  I loved when an over-exuberant or perhaps an inebriated customer from the Liquor store would give my Grandmother an unsolicited lesson in profanity or worse. She would run outside and shoo them away with her hanky– but always politely with a personal touch.

Life now might be more efficient with cell phones and other time saving devices, but everything now seems to have lost its personal touch.  Things are changing so quickly that soon charging your phone will become something you did last century, and one only wonders what new invention will become our new impersonal lifelines to the world. Dust in the wind…..

Robin D.Tyler-My Grandmother (Ruth Rexford Tyler ) was the Night Operator at the Bell switch Board in Ayer’s Cliff. When My family would come to visit. I would get up VERY Early in the Morning and go to the Switch Board. She taught me how to Answer the Board and direct a call to the right Person. I would man that station when she left the room from time to time. At the end of here shift we would walk home and she would make Breakfast for me. Nanny Died the summer of 65. Many years have passed But I have these fond Memories of being a Young Lad with My Nanny !

Bob Cathcart– In 1959 my dad; a Bell Canada foreman was transferred to Cookshire, to change the phone above, to the “new” dial system. Our number was 123. When change over was nearly complete one of dads crew called my mom to advise they would be “blowing out the lines” and she should cover the receiver in plastic. When dad arrived home she had placed a bread bag over it. Best prank ever.

David Hosking– My mom did this for a while in Bishopton

Bonnie Rolleston– My mom, Joan French, was an operator in Cookshire – I think 1955ish – have a great pic of her at the switchboard

Pauline Stone Bampton– I was an operator in North Hatley in the late 1940’s.Hazel Cinnamon was our supervisor.Rachelle? also worked there at that time. The office was above the Bank

Jean MacDonald– It was up at Tricotex Company Ltd in the old army camp on Drummond Road in Sherbrooke. It was PBX on the corner of the board. I don’t really know what it spells…in those days I suppose I was not interested in details of equipment. It was fun to use. I did when the person was not there at the desk.

Muriel Chute-Shaughnessy– I remember going to the Bell Office in Waterville with Mary Kydd I was just a little girl..wonderful memory

William Middleton— Had a sister who worked at the office in Rock Island.

Kerry L. Buzzell —My Mom, Roma Bonnallie worked in Sherbrooke, Quebec at a Bell Telephone centre when she was a young woman. My Uncle had a switchboard like the one above in his pharmacy in Oil Springs, Ontario in the early years of telephones. 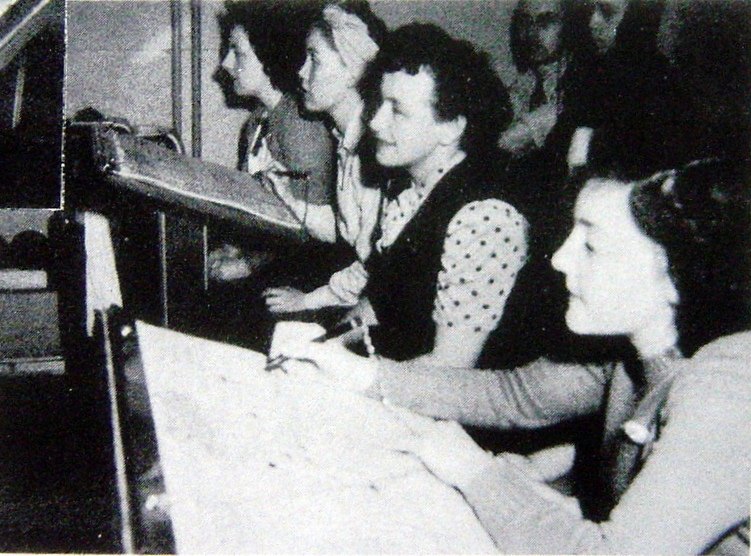 Over the years, the relatively small “Farnam Telephone Line Co.” in Dunham had expanded several times; first in 1906 when Ernest Turner, who had become partner in the company, took it over and more so in 1909 after Oscar C. Selby became partner. Since the Farnams were not connected with the company any more, the name of the company was changed to Citizen’ Telephone Company, a name which was available after the liquidation of the earlier company with the same name in Waterloo. Under the leadership of Oscar C. Selby, the new company was so successful it was able to purchase in 1911 the Bell Telephone systems in Dunham, Cowansville and Frelighsburg. In order to accommodate the steady growing business, the Citizen’ Telephone Co. constructed in 1916 a new central office in Dunham giving service to their clients around the clock with 3 operators in duty. Brome County Historical Society-Telephone (Vol. 3, p. 166)-Ville de Cowansville 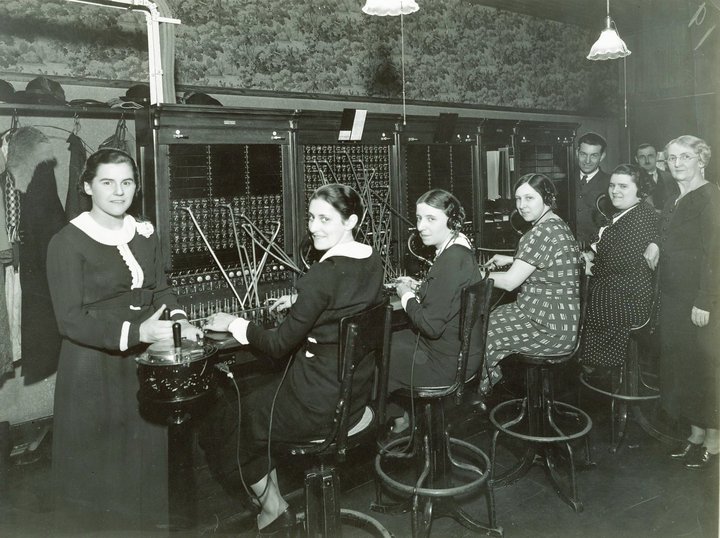 For the Love of a Telephone Table

The Telephone and its History in Almonte

But I Can’t Spend my Telephone Money!

Where Did the 257 Telephone Exchange Come From in Carleton Place?

Jenny, Jenny, Who Can I Turn To?