What in Sam Hill is wrong with that boy? He’s Peck’s Bad Boy, and he will go to the dogs!”

My Grandmother Mary Louise Deller Knight threw this phrase around once in awhile and I had no idea in Sam Hill what she was talking about until today. I spotted the social note in the Ottawa Journal and after 65 years it clicked what Mary Louise was saying. Peck’s Bad Boy was nothing but a bad kid.

“Henry “Hennery” Peck, popularly known as Peck’s Bad Boy, is a fictional character created by George Wilbur Peck (1840–1916). First appearing in the 1883 novel Peck’s Bad Boy and His Pa, the Bad Boy has appeared in numerous print, stage, and film adaptations. The character is portrayed as a mischievous prankster, and the phrase “Peck’s bad boy” has entered the language to refer to anyone whose mischievous or bad behaviour leads to annoyance or embarrassment. Described as “a vicious little swaggerer” and “no more than a callous brute” Hennery’s antics were more mean-spirited than earlier boyhood characters like Huckleberry Finn and modern criticism views the violence and racism in the original stories as objectionable or politically incorrect”. (Wikipedia)

Peck’s Bad Boy was played by George M. Cohan in an 1891 stage adaptation of the stories and then was played in a 1921 silent film by Jackie Coogan (who the same year co-starred with Charlie Chaplin in The Kid and later was Uncle Fester on the TV sitcom The Addams Family) and in a 1934 ‘talkie’ by a later child star, Jackie Cooper. Peck’s Bad Boy was also the name of a popular jazz band of the 1920s. (see video below) 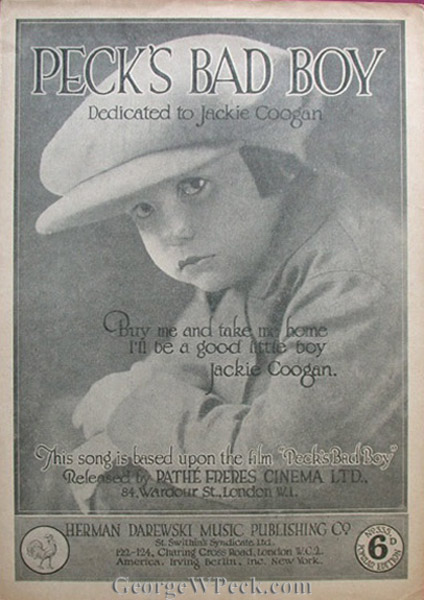 Much of the humor of Peck’s Bad Boy was probably questioned as per the Carleton Place social ad above. For example, in one of the stories, Henry’s Pa (who, by the way, is often pictured as a drunkard in the newspaper stories) attends a rabidly puritanical church service and finds his handkerchief soaked in rum and stuffed with playing cards. In the movie, the family attends a church service, and Henry has loaded his father’s lumbago pad with ants which become active right in the middle of the service. Of course, when he pulls out his handkerchief to wipe his brow, playing cards (which Henry had placed there) fly all over the pew. Of course we shouldn’t rule out *two lads from St. Andrew’s Church in Carleton Place,  or the *boys climbing Boulton’s Mill as not being “Peck’s Bad Boys” too! So maybe Carleton Place shouldn’t have been so indifferent  in the viewing of that film in 1909- as boys will be boys.

Other very typical situations include Henry letting a man-eating lion out of his cage at the circus, having his friend pose as a woman to blackmail money from his father for the circus, and hiding the inventor’s plans in Jack Martin’s pocket. The stories had a multitude of situations from which to draw such as substituting pieces of rubber tubing for his father’s noodles, lining his father’s hat with Limburger cheese, and convincing his Pa that he’s crazy when he sees green and blue poodles ­ the poodles were actually being used for an advertising gimmick. It’s a wonder Jackie wasn’t starred in a series of these Peck’s Bad Boy movies– and a shame, too!

*A Sneeze of a Tune from St. Andrew’s Church in Carleton Place

Larry Goldstein and The Roxy Theatre of Carleton Place