Photo from The Circus Blog

with files from –August 18 1872 Almonte Gazette

The Rosamond Woollen Mill shut down on Wednesday in order to give the employees an opportunity of attending the circus. The great event of the week was the appearance of Howe’s Circus.  A large crowd of people was attracted to Almonte and the attendance in the afternoon was very large and in fact it was estimated just a little of over 3000 people came to attend the event.  The attendance was so large in the afternoon every tier of seats in the large pavillion was over crowded.  At night the attendance was also good but not as large as the afternoon when the Rosamond Mill was closed. To mar the event an individual hailing from Carleton Place, having taken one glass too much, became *obstreperous, and was collared by Constable Patterson and taken to the lockup

The man named O’Donnell, who was drunk and disorderly, was endeavouring to create a disturbance at the Almonte House, when one of our newly-fledged constables “went for him ” in lively style, and eventually bore him off to the lockup in triumph. In consequence,  the prisoner had to pay, $8 and he was liberated the next morning and told to return to Carleton Place immediately.

*Word of the day: obstreperous
noisy and difficult to control. 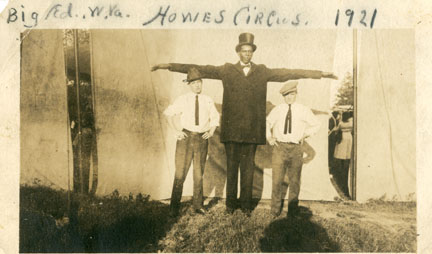 Previous to 1825 a circus top had not been used by the few small shows hardly worthy of the name of a circus. That year “Uncle” Nathan Howes of Putnam County, New York, became possessed of an ancient elephant called “Old Bet” and organizing a small show he started forth with a topped tent and about a dozen men and horses, making an incursion through New England as far East as the Indian Village of Bangor, Maine. Seth B. Howes, a boy of eleven, afterwards a famous manager, accompanied the expedition. “Uncle” Nate’s success turned the heads of many “Put County” investors and all the boys of the region caught the circus fever. In the writer’s early days, you could make no mistake by going into any store or office at Brewsters Station and talking circus. Every mother’s son of them had “followed a red wagon” in their day in some capacity or “been ahead of the show.” The youth of “Put County” “took a course of circus” just the same as they “go through college,” these days.

Danbury, like Bridgeport later on, became a circus town, the former on account of its being the home of the Turners and George F. Bailey, and the latter by its’ development by P. T. Barnum. Danbury was also famous for horse thieves, it summered and wintered the horse theves and wintered the circus. There was no connection between the horse thieves and the circus, but the fellows who appropriated other people’s horses never meddled with the circus stock as Mr Bailey once humorously remarked, “they extended the usual courtesies to the profession,” explaining seriously, “the crooks were afraid of being caught before they could cross the York State line and that the showmen would take the law into their own hands and take the halter off the horse and put it on the thief .”

When the small circuses dragged around the country on wheels, there was little offered in amusements summer or winter, outside the, larger cities, and these were few in number and, small in population. The stage was under a ban almost everywhere, and but few of the people traveled or passed beyond the borders of their own town. A stage coach trip, like seeing the elephant on a visit to the circus, was the event of a life.

Nathan Howes, who put a cloth roof over the circus, was a wire walker in his younger days, traveling from town to town exhibiting his skill in hotel dining rooms at a shilling a head. He was in himself “the whole show” and when he appeared before twenty paying people assembled with the landlords family and the help admitted free he was “doing a good business.”

It was some years before Aron Turner and “Uncle” Nate Howes” called off the mounted advance agent and replaced him with the bill wagon and the advertisers buggy. Paste took the place of tacks to fasten the bills. The wooden curb ring that was hauled about the country in sections and the man on horse back ahead of the show, lingered long after the abandonment of the sidewall topless circus.  He exhibited under a sixty-foot round top which would not make a dressing-room for a circus of today. This innovation had seats four tier high and a twenty-foot dressing room; also a four-horse band-wagon. Undoubtedly competitors gave the enterprising manager a wide berth and avoided his chosen territory. —Circus in the Days of Old

Before Rooney’s Pool House There Was..

The Boy that Ran Away to the Circus and Other Stories

When the Circus came to Carleton Place

What Happened the Day the Circus Left Carleton Place

My Greatest Summer Show on Earth!