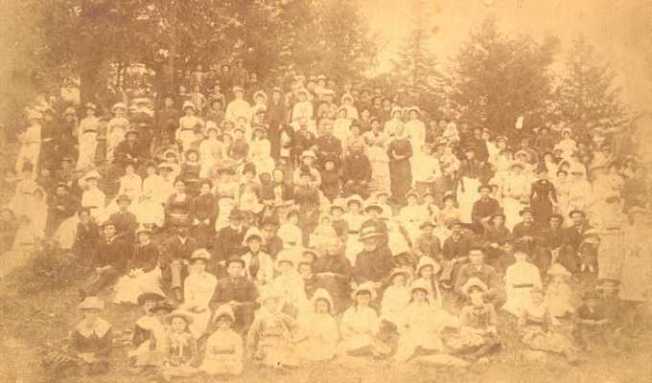 The unassuming little village of Playfairville, existing today is only as a small collection of homes and a church. It’s easy to miss or to pass through without thought of what once existed here. In fact, Playfairville has a long and very interesting history with worldwide connections and links to people such as mathematicians and politicians and to events including the French Revolution and the War of 1812. —Susan Murphy on Roadside Thoughts

Andrew William Playfair was Scottish, born in Paris and Educated in Edinburgh. After building his dam and lumber mill, he continued to develop the area through his enterprising construction of a grist mill, a carding mill for wool, and an iron ore mine. This brought many new families to the village, which grew to include a number of houses, stores, and even a hotel and stable. Many of the village’s buildings stood along both sides of the road and some houses and the hotel stood on the hillside across the river.

Photo–Only the stone hearth chimney of Playfair’s original house and stone remnants of the dam remain along the river.Andrew Playfair & the history of Playfairville, Ontario

The Playfair mills operated in the family for a number of generations into the future, but were eventually closed as timber and iron ore supplies dwindled. A map of Lanark County for 1879 shows that Maberly, Playfairville, Fallbrook, Balderson, Glen Tay, Allan’s Mills, Elliott, Bolingbroke, Stanleyville and Harper all had their own post offices.

Today, very little remains of the village built here, leaving few hints to the area’s past; however, almost unrecognizable remnants of Lt. Col. Playfair’s original house and dam can be found. The only buildings built by Playfair and his son ‘Big John’ remaining in their entirety today are Playfair Manor, built in 1830 on a bend in the river (now privately owned) and the United (formerly Methodist) church built in 1860 and still owned by the Playfair family today. 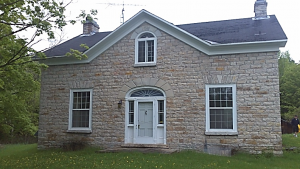 There was once a  bustle of activity that once existed in this small hamlet and the connections this small and largely unknown village has with history through its found only the stone hearth chimney of Playfair’s original house and stone remnants of the dam remain along the river.

However, Playfair Manor, a Georgian Loyalist-style stone house built in 1830 by Lt Col Andrew Playfair and his son ‘Big’ John Playfair on a bend of the ‘Little’ Mississippi still stands. It is no longer owned by any descendants of Playfair.

A.W. Playfair was born at Playfairville, Lanark County, Ontario on May 26, 1850, the son of John and Elizabeth Playfair and brother of George and John. He married Agnes Morrow of Maberley, Ontario, in 1871. From We Made Baldur

So while I was searching for something else I found these personal notations on Playfairville and the only reason I found it was because someone spelled “which” wrong.

Personal Notes about  Playfairville  (would love to know more please)

Much too my delight, I am happy to report that Playfairville is once again inhabited with the Playfair blood line. As I and my parents work to restore my great uncles home behind The Playfair Historic Church which we own as well I find it all to interesting how comfortable I and my two sons feel living on this ancestral plot of land.

Although its just a small part of Colonel Playfair’s original land, it feels right. My sons Jonathan and Nicholas from what I can see are the two youngest Playfair’s in the country and I am honored to have the good fortune to raise them here were our forefathers began life in Canada. My boys love that they are the only kids in school who live in a town named after them and tell me they want to live there forever. We have started collecting historical photos and artifacts to display in the house and church to help tell the story of the Playfair family and its once thriving village. Peaceful, beautiful and full of great neighbors its a wonderful place to live.

Again our family will be growing and increasing the size of this fantastic little community. I am excited to announce that my fiancé Natalie Holmes will be moving from Kingston to live with us in Playfairville this spring. Natalie also has prominent history in the County as her Grandfather was a well respected Doctor in Lanark village for many years. We will be married in The Playfair Historic Church on Sept 19th of this year.

Author’s Note–Recently, the church was refurbished and redecorated by the current stewards Robert William Richard Playfair and James Kenneth John Playfair. The church was given a fresh coat of paint; however, the original stencils around the top of the church and above the wainscoting are the original patterns. Also to receive a restoration were the paintings that hang over the pulpit.


Gayda Errett on 04-Dec-13 2004
When we could not find a country-rural someplace in rural Alberta and British Columbia because what we could afford were ‘fixer-uppers’ demanding hundreds of thousands of dollars in renovations. The acreage and Confederation log house we purchased in Playfairville would be worth a million or more in the aforementioned provinces. However, the add-on for us is that at the time of purchase we wanted to know where in the area we were located other than the Concession and Lot numbers. Upon going to the tourism bureau in Perth to get a map, we discovered it was Playfairville.

Adding to the surprise the acreage we just purchased, was our neighbour across the Mississippi River coming over to welcome us. He asked if we knew that we were on the Playfair ancestor’s land plot. We did not despite my husband is a descendant [we did not choose the property based on his descendency. Rather it was desperation and destiny on our part seeking somewhere in Canada that we could purchase an acreage we could afford.

Purely coincidental that we are on my husband’s ancestor’s property. We learned our neighbour was living in one of the 3 Playfair homes in Playfairville. His is the first one built by Lt. Col. Andrew Playfair. [See our daughter’s information above.] When our neighbour invited us over for a dinner party, I commented to my husband, ‘Can you believe you are dining in your ancestor’s home?’ It was truly remarkable that he has ended up without intending to do so, on his ancestor’s land plot. We have a copy of the Deed.

Christian Poupore on Nov-13 2005
I am fortunate enough to be the son of the current owner. My father purchased the Playfair estate this summer and it has been a treasure of epic proportions. I can confirm that indeed the original chimney does in fact still stand in the drive way to sit day!!!! My girlfriend and I have been taking photos all over the property. any further records you may have about this land would be extremely exciting to view.

Playfairville: tranquil village on the Little Mississippi. Playfairville was originally known as Playfair Corners, Mills, or Rapids and at the junction of McDonald’s Corners Road and Fallbrook Road. It was named after Lieutenant-Colonel Andrew William Playfair born in Paris, France in 1790, and son of Mary Morris and famous father William Playfair who invented the Pie, Line, and Bar graphs and authored many books as a political and economic commentator still in print today. Lt. Col. Andrew Playfair is best known for his writings about the epic 1176 km historical military walk with the 104th (New Brunswick) Regiment of Foot from Fredericton to Kingston in the winter of 1813 and his engagement in the War of 1812-1814 battles at Sackett’s Harbor in May 1813, where he was wounded and a month later on June 24th, 1813, with the surrender of 500 Americans at the Battle of Beaver Dams after the British were warned about the surprise attacked planned by the Americans by Laura Secord. Lt. Col. Playfair was granted 600 acres of land along the Little Mississippi River after his service in the War of 1812-1814.

Lt. Col. Playfair built a dam, and established lumber, grist and carding mills, an iron ore mine, housing, stores and a hotel and stable until the iron ore and forests were exhausted. Only the stone hearth chimney of Playfair’s original house and remnants of the dam remain. However, Playfair Manor, a Georgian Loyalist-style stone house built in 1830 by Lt. Col. Andrew Playfair and his son Big John Playfair on a bend of the Little Mississippi still stands but is no longer owned by the Playfairs. The former Wesleyan Methodist Church and later United Church, until its closure in 1965, is located on Fallbrook Road and was built in 1860 by Lt. Col. Playfair and his son Big John in the Federal-style. The church is now privately owned and operated by the Playfair family.

Located on lot 22 of Concession 12 of the Bathurst Ward, this mill was built by Col. Andrew W. Playfair who was a retired lieutenant of the 104 th Foot Regiment, New Brunswick Fencible Infantry, who located there in 1816. In 1851, the census shows that Andrew Playfair St. is the proprietor of the grist mill, and a carding and fulling mill.

The Monumental Military March of the 104th (New Brunswick) Regiment of Foot from Fredericton to Kingston departing February 16, 1813 and arriving April 12, 1813. This Epic Overland Journey from New Brunswick through Lower and part of Upper Canada (Québec and Eastern Ontario) in the Winter of 1813 through snow storms, frigid temperatures, and lack of overnight housing on snowshoes took place during the War of 1812-1814.
One of the British Officers, Lieutenant Andrew Playfair, son of William Playfair who invented the line, bar, and pie charts, wrote about the 104th Regiment’s heroic winter walk in an article published by the British Standard on January 20, 1862. Lt. (Col.) Playfair was granted 600 acres of land in Upper Canada and founded Playfairville, Ontario, housing lumber, grist, and carding mills, iron ore mine, hotel, post office, church, stores, and houses. Only the church and two stone houses remain. 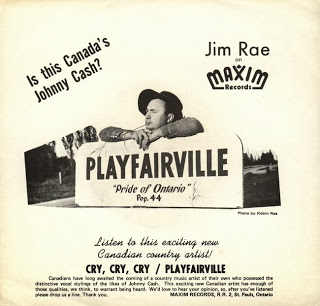