A normal school is a school created to train high school graduates to be teachers. Most such chools are now denominated “teachers’ colleges”.

The Normal School is today part of Ottawa City Hall. It was originally built in 1874 as Ottawa Normal School and served as a teacher’s college. The Gothic Revival building stands at Elgin Street and Lisgar and several extensions were added to the rear of the building.

In 1986 it was purchased by the Regional Municipality of Ottawa-Carleton, to serve as part of a new RMOC headquarters. To the north of the college the main building of the new RMOC building was erected and links were created to the old school, which was re named the Heritage Building. With the creation of the new city of Ottawa in 2000 the building became part of Ottawa City Hall. The mayor has his office in this building, overlooking Elgin Street.

The photos below are ones I took at a local auction of the 1935 Ottawa Normal School Annual. Unfortunately I didn’t win it so I was glad I took photos.

I could not believe how many unmarried teachers there were.  In 1872, some female teachers could be dismissed for getting married–and things weren’t a whole lot better in 1915. Imagine being forbidden to loiter in ice cream shops if you were a teacher. I bet there was no telling what might happen if you ordered half vanilla and half chocolate!

It seems men were not exempt either. Any teacher who smoked, used liquor in any form, frequented pool or public halls, or even got shaved in a barber shop would give the board good reason to suspect his worth, intention, integrity, and honesty.

In 1915- female teachers were not allowed to marry either during the term of their contract- nor keep company with men. They had to be home between the hours of 8 p.m. and 6 a.m. unless attending a school function. You couldn’t under any circumstances dye your hair or dress in bright colours. Well, there went my chances!

The reason for the rule against marriage is that it would normally be followed by pregnancy, and no one wanted a pregnant woman teaching their children.  Oh the horrors! Also, the teacher would most likely be unable to finish the term if she were to become pregnant and it would be difficult to replace her. As for the other rules, if they felt it was improper for a teacher to behave that way–they made rules prohibiting that type of conduct. 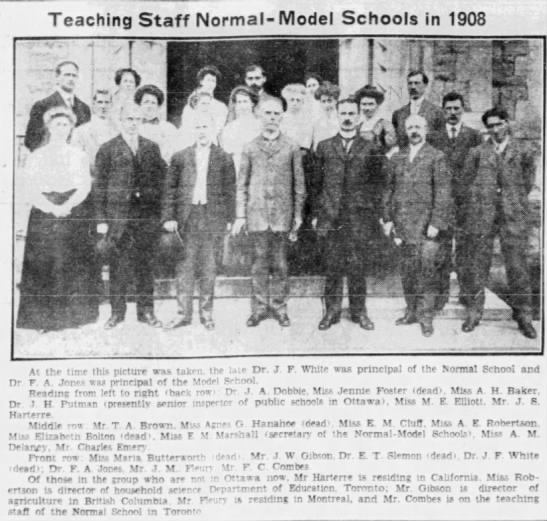 Norah Craigie (Nora Pombert)–
I was a little girl approximately five years old, I went as a student to the school called the normal model school. We had to line up to enter and shake the teachers hand and curtsy first thing in the morning.

More to come on a daily basis..

Too Hot for Teacher? What Happened to Yours?

Battle of the Hatpins — Women of Local History

The Curious Case of Benjamin Tett