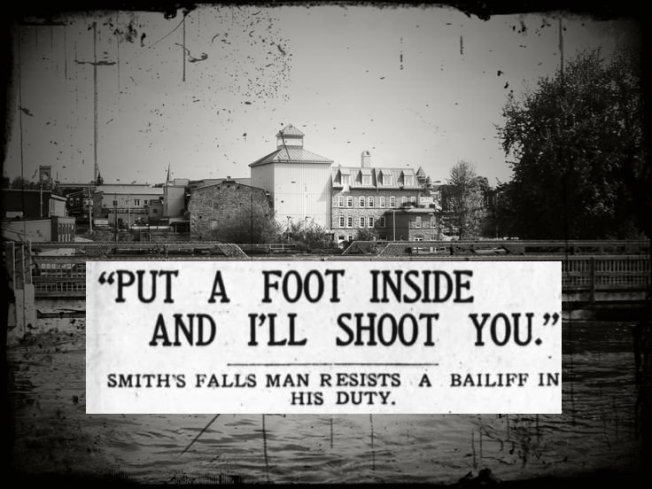 On October 19 of 1910 Leslie Purcell of Smiths Falls made a reckless attempt to foil the purposes of Baliff R. Burris of Perth. Acting under instructions Mr. Burris went to Smiths Falls in the morning to make a seizure of some machinery in a small planing mill owned by Purcell and against the manufacturers H.W. Petrie and Co of Toronto who had a lien.

Accompanied by Petrie’s representative the bailiff went to the mill but  found it all locked up. In the meantime Purcell was working at a house across the river. After he found out what was about to transpire he went back into the house but crossed to the mill. He left the officer in the front and went to the rear of his mill while the bailiff thought Purcell was about to let them in.

That was not about to happen and he aimed a revolver through a broken window and screamed at the officer:

“Put a foot inside and I will shoot you!”

Being unarmed the bailiff decided to call the police and let them handle it. He had barely got off the phone when a large bang and clouds of smoke, dust and debris began to fill the sky. To foil and spite the law Purcell had dynamited two of his machines. The machines were toast and all the windows were shattered and pieces of iron embedded the structure. Purcell was last seen escaping having been unharmed by the ordeal. Warrants were issued for two charges plus threatening a life. No word was mentioned in  other issues if he was caught– and it seems like he disappeared off the face of the earth.