0The Millstone has published its first instalment of 365 FACTS ABOUT MISSISSIPPI MILLS. It will be a series of posts for Canada’s 150th birthday this year — “365 Facts About Mississippi Mills.” So I thought I would begin to a few about Carleton Place.

The facts below are from the flyer passed out on January 1: Carleton Place-A Valley Town at Confederation 1867 by the Carleton Place and Beckwith Heritage Museum. I have personally added some extra tidbits under the facts. 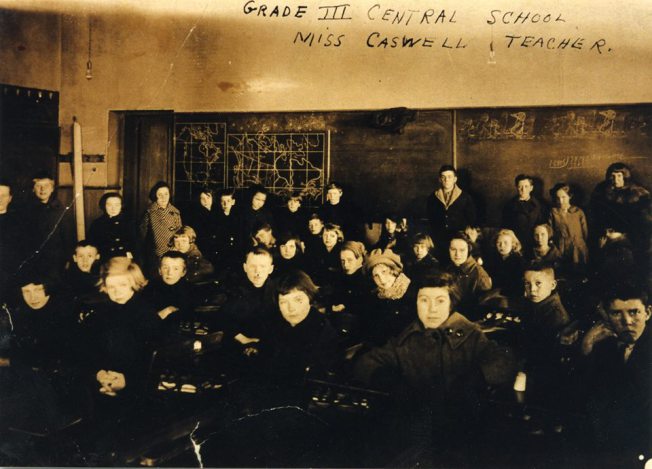 Carleton Place and Beckwith Heritage Museum Photo and text–These children attended Central School on Bridge Street where the post office stands today. They are pretty bundled up!… maybe the wood stove wasn’t throwing much heat that day? Taken in the mid 1920’s – note the bare electric bulb, inkwells, and map of North America.

Did you know the building was built to form the letter T so the whole student body could be under the eye of one teacher? Read how crowded the Central School became in: The ‘Crowded House’ of Central School in Carleton Place

Hurd’s Hall was used for a lot of purposes and finally turned into a residence. Did you know the building was once hit by a car? Read all the fact’s about Hurd’s Hall here: The Most Photographed Home in Carleton Place

Fact-The town had a weekly newspaper the Carleton Place Herald and a Mechanic’s Institute with a circulating library for members.