It appears that the train which arrives here at 7.40 in the evening is timed to cross the express going to Ottawa at Carleton Place Junction but last evening the Grand Trunk train was over an hour late and the Ottawa train waited for it.  After waiting at Carleton Place for some time, the conductor of the express coming south received an order from the train dispatcher to cross the Ottawa train at Franktown.

The above train proceeded to Franktown and the conductor and engineer went into the station to receive their orders.  The station master was out, he having gone down the track to signal the train coming from the south.  The conductor and engineer on coming out of the station house heard the other train coming, when the engineer jumped on his engine and reversed her, but by this time the train from the south was in close proximity and a collision could not be avoided.

The engineer and fireman of the express coming south jumped and the two engines came together with a crash.  The engine on the Ottawa train was not much damaged but the other was badly smashed, but not bad enough to stop its backward motion.  It ran the train back for nearly two miles, the only employee on board being a brakeman who at last succeeded in stopping the train.  The night was very stormy and signals could only be observed a short distance.  An investigation will be held when further particulars may be expected. 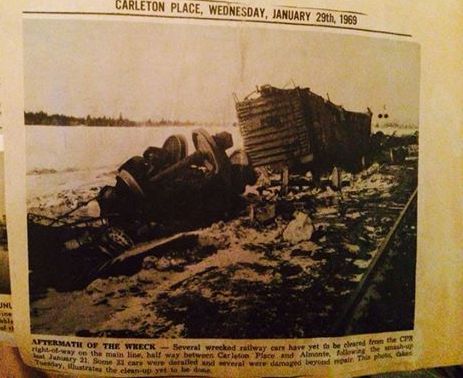 Photo from the Carleton Place Canadian from the Wanda Lee Morrison and the late Joan Kehoe collection.

This was caused by a broken wheel on the fifth car behind the locomotives. Ottawa Journal 1969

CARLETON PLACE-  Attempts to clear the $500,000 wreckage of 34 freight cars piled up at a level crossing near here Tuesday continued this morning under the threat of an explosion from two overturned propane gas tankers.

Provincial police kept guard over the area, about three miles north of here on Highway 29 at the CPR crossing, as about 50 men and two giant cranes hauled twisted box cars from the clogged line.

The highway remained closed to traffic today while other trains were rerouted.

The two tankers were not ruptured in the massive 3.30 p.m. derailment, but police kept hundreds of curious spectators well back from the scene in the event leaking gas might explode.

Both police and railway officials were astonished that there had been no injuries.

One of the first cars to derail left the tracks just before the level crossing and sliced across the highway only a few feet in front of a waiting school bus.

Other cars ripped up sections of the highway, railway lines and wooden ties as they piled up, and in some cases, landed on top of one another.

One freight car landed with its steel wheels on top of a tanker.

Two hydro poles were sliced through by other cars. The top section of ome pole was left dangling over the line supported only by the high-voltage cables.

Complete wheel assemblies of many cars were torn off as they piled into one another and lay strewn along the tracks among sections of line, twisted cars and splintered ties.

A crack which caused the leading wheel of either the fourth or fifth car to come off is believed to be to blame for the $500,000 freight train crash near Carleton Place yesterday.

It is known that at least eight rails between Almonte and the accident scene were broken.

This could have been caused by the faulty wheel running out of line and pounding against the rail as the east bound train headed for Carleton Place, said one railway employee.

The 60-car freight train left Chalk River several hours before. Its speed at the time of the accident was estimated to be about 45 m.p.h.

George G. Sayer, assistant superintendent for the Smiths Falls division of CPR, said work crews were concentrating their efforts to pulling cars away from the tracks and repairing breaks so regular traffic, which had been diverted to other lines, could again travel the main line.

Mr. Sayer said he hoped the two cranes, one brought in from Smiths Falls and the other from Sudbury, could pull the two tankers back on to the tracks and pull them away by sometime this afternoon.

“The line should be open again by about 5 p.m. today,” he said, adding that the general freight being carried by the train could then be hauled away and the other cars righted and moved later this week.

Mr. Sayer said there was, as far as he could tell, little damage to the cargo.

One eye-witness, Bill Ritchie, 32, a Bell Telephone employee from Almonte, was driving north toward the level crossing when he saw the red signal lights begin flashing.

“I saw the train swaying so I stopped about 500 feet from the tracks,” he said. “The next thing I saw were freight cars flying through the air like cardboard boxes in a high wind. It was terrifying.”

He said a couple of cars shot across the highway “while the others piled up on the north side like magazines thrown on the floor.”

“There was a hell of a crash and snow flying in the air. A lot landed on my truck so I jumped out and after a minute or two ran up to the tracks. I thought people would be hurt,” said Mr.Ritchie.

He said that by the time he got there, people from the locomotive, that had shot through the crossing pulling three cars and dragging a fourth without wheels, met him.

“One box car just missed the school bus, which luckily didn’t have any children aboard, and another cut into the hydro poles and the warning flashers,” said Mr. Richie.

“There was a ball of fire in the sky when one hydro pole was cut off,” said Mr. Ritchie, who added that he and a work-mate then flagged down cars until police arrived. 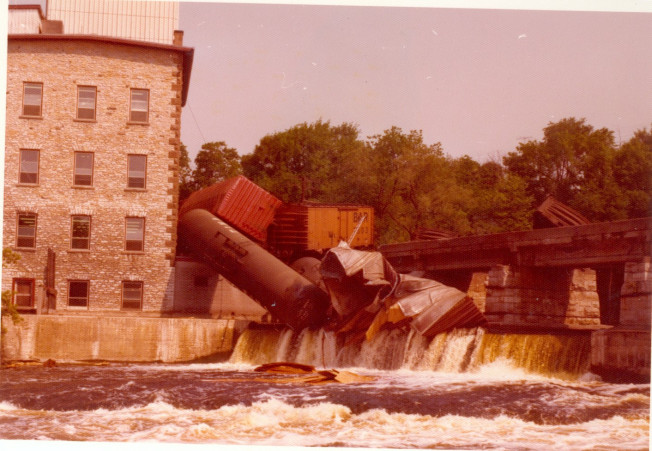 1974, June 5 – Eastbound freight train #76 derailed the last 16 cars of its 73-car train at Almonte.  The cars ended up over the bridge into the Mississippi River, and hit the flour mill at the highway 44 crossing.

Lin Jones‎ –E.P. Clement. my grandfather has many pics of Almonte of old.


ALMONTE (Staff) The last 16 cars of a CP Rail freight train jumped the track while crossing a bridge and smashed into a flour warehouse here early today.
The derailment caused extensive damage but no injuries.mThe end of the 73-car north-bound train swung off the track at 3.35 a.m. walloping a warehouse adjacent to the Almonte Flour Company mill.

Two empty tank cars tumbled into the Mississippi River. Few of the derailed cars were carrying freight, a CP Rail spokesman said. The wayward train uprooted more than 800 feet of track and blocked Highway 44, the town’s main traffic artery. The highway remains closed today as work crews struggle to clear away the wreckage. The warehouse, constructed in 1820, is a local landmark near the centre of town. It was vacant when the accident occurred.Mill manager Jack Harris described the accident as spectacular. “Incredibly, no one was hurt,” he said.

The train was making its regular run between Chalk River and Smiths Falls. The two CP trains scheduled to pass through Almonte today will be rerouted over CN tracks, the CP spokesman said. CP Rail is investigating the derailment but has not yet determined the cause. Damage has not been estimated.

The Kick and Push Town of Folger

The Men That Road the Rails

So Which William Built the Carleton Place Railway Bridge?

The Mystery Streets of Carleton Place– Where was the First Train Station?

Memories of When Rail was King- Carleton Place