Chris Gardner photographed these in their frames and sent Charles Dobbie these copies. The names and descriptions included with most of these photos are transcribed from the originals. 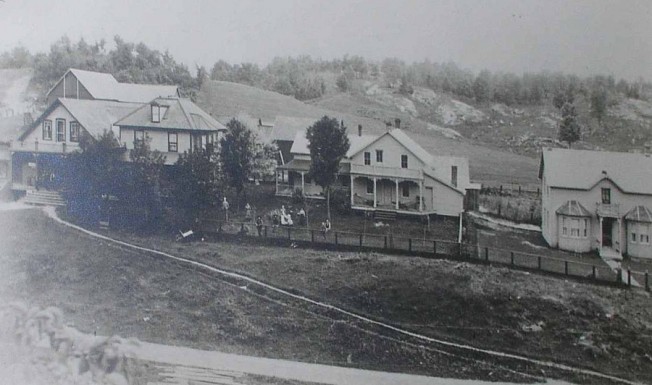 The location has been identified as Mississippi Station–General Store & Dwelling, Hotel, White House. Photo taken 1904.
The hotel was known as the Forest House — owned and operated by Spike Jones. Later it was sold to Isaac Allan and used by him as a General Store and dwelling until his new store and dwelling were completed in 1890. Then the old hotel was used as an undertaking establishment. It was torn down and sold to Isaac Kirkam at Clarendon and rebuilt as a dwelling.
Left to Right: William Geddes (standing on fence), Lucy Geddes (with white waist & dark skirt), Stanley Geddes sitting on Gertie Hughes’ knee. 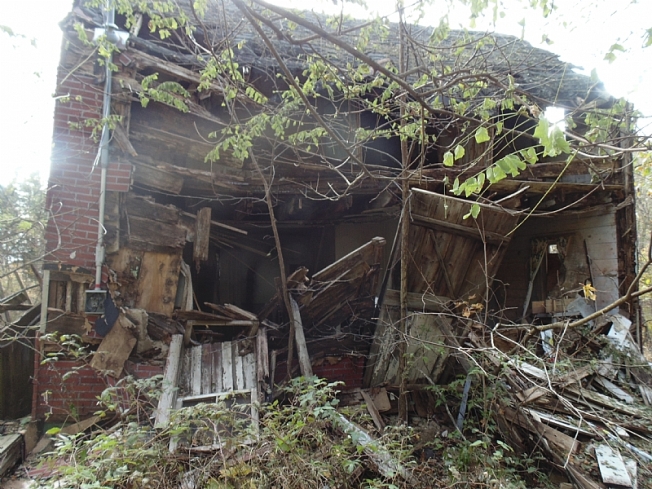 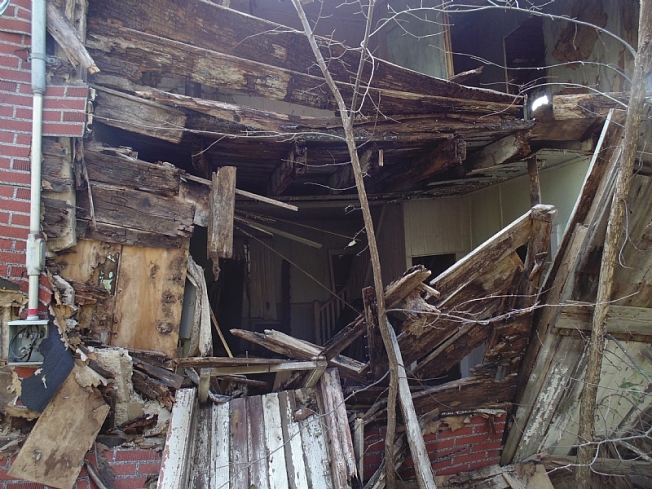 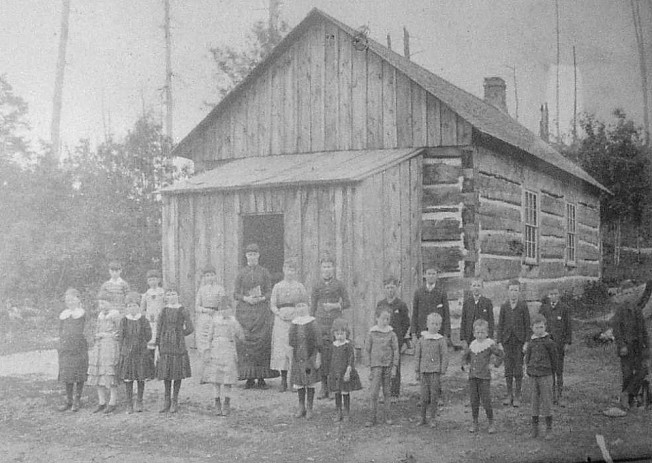 This was the first school in Snow Road. Built in 1881, it burned in 1893, when the second school was built. Unfortunately no teacher or student names are available for this photo, but the teacher may be Bedelia Maxwell who was the first teacher, 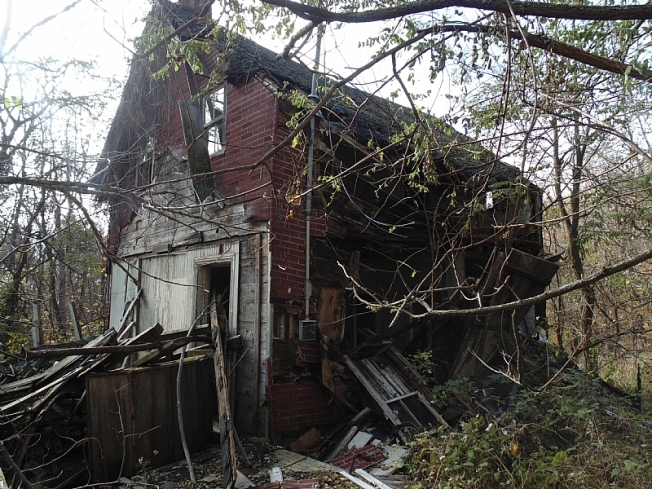 A paper prepared and read by Miss Maude Walker at the July (1936) meeting of the Snow Road Women’s Institute:

This locality was known by the name of Palmerston in its early days, which is the name of the township unto the present day. The first white settler was Robert Wilson, who came in about the year 1835, but the Indians were hostile towards him and he didn’t stay.

James Millar and his brother Thomas, were the next to come in 1840. James Millar traded his farm in Sherbrooke with Mr. Wilson, as he was friends with the Indians and they did not molest him. Mr. Millar’s descendants lived on the same farm until the year 1914. James Lett is the present owner.

The Geddes families were also among the early settlers, living on farms now owned by J.E. Millar, J.D. Millar and John Closs.

In quick succession other settlers followed, namely, Sims, Gemmell, Riddell, Hossick and Bryce, all coming from Scotland, the voyage being made in sailing vessels, which took about six weeks to come across.

Roads in those days were little better than paths through the bush. About the year 1856 the government decided to build the settlers a road, so a government engineer was sent, a man by the name of John Snow, so the road was named for him, being called the Snow Road.

Perth was the nearest town and it took two or three days to make the return trip with oxen. Potash was sold there, and household supplies purchased.

The social side of life was not forgotten. Many were the bees and dances held in neighbours’ homes. All shared in each others joys and sorrows.

Lumbering and the manufacture of potash were the chief industries of this time. A firm by the name of Skeads were the first lumberers of the district, then the Gilmours, Gillies and Mclaren, and the Canadian Lumber Company. Men were poorly paid, worked from daylight until dark and the food consisted mainly of bread, pork and beans, with tea.

The Mclarens did much to benefit the people. They built and operated the first store, and also kept the first post office, which was named McLaren’s Depot, the mail being brought by stage from Perth three times a week. They were promoters of the first school and church.

The first school was opened in 1881. Miss B. Maxwell was the first teacher. A church was built in 1885, the first minister to preach in it being Rev. W. McCauley.

In the year 1876 the K. and P. Railroad was built to Mississippi. Five years later it was completed to Pembroke. A station was built in this vicinity and it was named Snow Road. With the event of the railroad going through, many new people came, one of them being Robert Wood, who operated a small saw mill, and his son Delbert built and operated a general store. A large saw mill was built beside the river and this was operated for many years, giving employment to many people. Also Mr. John Allan and his family were engaged in business at this time. Mr. Allan was superintendent of the first Sunday School. Many people have come and gone since, many of them helping to make the community what it is today.

Thanks to Chris Gardner for providing the image of the Perth Courier microfilm.

Elsewhere in the same paper—note, still cannot distinguish if this name is Halliday or Holliday and age still blurred, maybe 69, maybe 89:  The following notice is taken from the Brussels Post, County Huron, Ontario and tells of the death of a former resident of this locality, Mrs. J.C. Halliday (Holliday) once of the Scotch Line.  Deceased was a sister of James Allan and Francis Allan of Perth and William Allan of North Burgess, Alex Allan of Almonte, John Allan of Mississippi Station, and Mrs. B.(?) Dodds of Perth.  “After long years of bodily suffering, borne with Christian patience and fortitude, Mrs. John C. Halliday (Holliday) passed peacefully away from earthly concerns last Monday evening, aged (illegible—maybe 89?).  Her maiden name was Agnes Allan and her birth place was the Scotch Line of Bathurst Township, Lanark County, near Perth.  On February 22, 1848(?) she was married to Jno. C. Halliday (Holliday) who survives her.  35 years ago they moved to Brussels then Ainleyville(?) where they have continually resided.  For the past 23(?) years Mrs. Halliday (Holliday) has been an invalid, and for over two (?) years confined to the house.  The majority of people grow restless and fretful under affliction but no so with the deceased and more than one test could be produced of the good received by a visit to the home where the Christly life was lived and the spirit of true resignation to the Father’s will was exemplified.  The promises of the good book ‘at Evantide it shall be light’ was fulfilled in Mrs. Halliday’s (Holliday’s) closing years.  Six children survive out of a family of ten.  They are John of London; Will of Calgary, NWT; George of Brussels; Mrs. Frank Uren(?) of Ingersol; and Misses Jessie and Maggie of Brussels.  Martin and Frank attained manhood before passing away; Robert at 14 years of age; and Allan at 2(?) or 3(?).  The subject of this notice was a consistent member of the Presbyterian  Church from her girlhood.  She was very much attached to her family and took a deep interest in them whether present of absent and they in return left nothing undone to add to her comfort.  On Wednesday afternoon, the funeral was held Rev. John Ross(?), B.A. conducting the service at the home on the corner of King and John Streets.  A portion of the 40th Psalm was sung by request by the deceased who took great comfort from Work of God.  Interment was made in the family plot in Brussels Cemetery.  The pallbearers were Thomas and John Strachan, G.A. Deadman, A.M. McKay, B. Garry and W. H. Kerr.  A beautiful floral wreath encircling the word ‘Mother’ and a cross were placed on the casket.”