Author Unknown- If anyone knows please let us know.

Another year has rolled around

And so I take pen in hand

And try to compose another poem

About Pakenham our fair land.

We hope our theme is known far and wide

As I’m sure of it you often hear

For there’s something of interest in Pakenham

At any time of the year.

In summer we have celebrations

On mostly every occasion.

You can play ball or go swimming

Or just on the beach be lazing.

And learn at her Eldercraft Shop

And at the new leathercraft store

You can cross our Five Span Stone Bridge

And get to Andrew Dickson’s studio and craft shop,

But be sure you don’t let them drop.

Now in Pakenham you will find

You can get groceries at Scott’s or Mann’s

Get your hair done at Eleanor’s or Debbie’s

And get gas or oil at Langford’s or McCanns.

You can get your electrical supplies at Bradleys,

Your hardware at John Parish’s Store.

But if its eating you want to do

Why Chenier’s and Centennial have it galore.

There are other sources of business

In Pakenham all year.

A touch of the old as well as the new was presented at the Pakenham Craft Show. (19 May, 1976 – The Arnprior Guide)

And in case you think I’ve forgotten them,

I’ll try to name them here.

Go to Branje’s or Barr’s for your welding

For Plumbing and heating John Early or Deugo Bros. get

Travel by Barr’s own bus lines,

There’s Scheel’s butcher where they sell steaks and roasts

There’s a good fire hall next door of which we often boast,

We have a fine library where you can get good reading

And cross the corner is the Dr’s office sometimes you might be needing.

There’s the Royal Bank on the main street

Our fine school where the children are bused to and fro

The Council Chambers on the corner,

Which draw cattle far and near

And right beside it is Stewart House

While there you may have no fear.

Peter Lehman has moved out of the village

To a new home fairly near,

But don’t you worry folks

Because he still sells John Deere

There may be a few I have left out,

Now I didn’t intend it you hear?

But if I have forgotten you,

I’ll try to remember next year.

We’re so proud of our fair village

Where there’s nothing but good will,

And you may worship at St. Andrews ,

Or St. Marks or Peter Celestine on the hill.

Now if it’s sports you have a liking to

There’s the curling rink where you might raise your hopes,

And if that doesn’t entice you,

Now this time of year is really important here

As each one rushes on his ways,

There’s an awful hustle and bustle

There’s so much activity in ten short days,

Be it skating, dancing or skidooing trips.

Contest for Miss Pakenham and Lumber Jacks and suppers

The pace would nearly make you flip.

This started out to be a short poem

I got carried away, that’s clear

But remember there’s “Something of interest in Pakenham”

No one seems to know for sure what people want these days, except that they won’t accept a cent less. 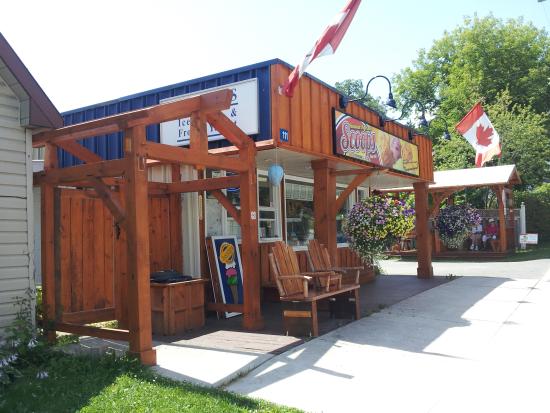 This photo of Scoops is courtesy of TripAdvisor

Prominent Merchant of Pakenham Expired After Opening Up For The Day

The Queen Versus Howard –Abduction with an OJ Defense?

Did You Know the Village of Pakenham Moved?