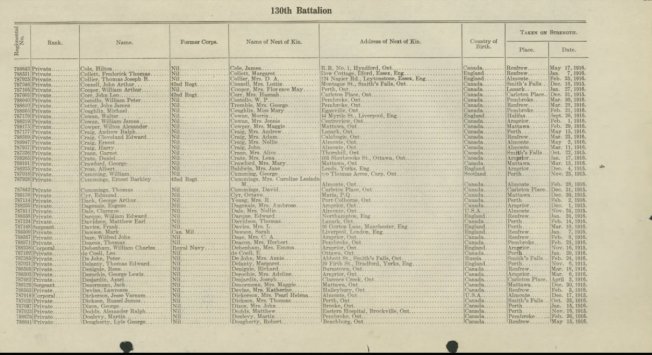 Did you know that the members of the C Company 130th Batallion were marched around Carleton Place one day and boy did they have wet feet! They marched to Black’s Corners through slush to attend church services. A little later they were outfitted with military service boots which were much more waterproof than their civilian ones.

The 130th (Lanark and Renfrew) Battalion, CEF was a unit in the Canadian Expeditionary Force during the First World War. Based in Perth, Ontario, the unit began recruiting in late 1915 in Lanark and Renfrew Counties. After sailing to England in September 1916, the battalion was absorbed into the 12th Reserve Battalion on October 6, 1916. The 130th Battalion, CEF had one Officer Commanding: Lieut-Col. J. E. de Hertel.

The first Presbyterian Church of the eastern half of Lanark County was built near Carleton Place in 1832, replacing a primitive log structure in a vicinity where services had been held since about 1818 and continuously since 1822.  The church remained in use until about 1870.

On the township’s Seventh Line road, two miles south of Black’s Corners and a mile east, its foundations may be seen.  In a recent pictorial map issued by the National Capital Commission its location is shown as one of the district’s historic sites.  Church services here were carried on for two pioneer generations by the first colony of Scottish Highlanders to be established north of the Glengarry settlement in Ontario.

One of the last commemoration services to be held within the walls of the Beckwith Old Kirk was conducted thirty-five years ago by a native son who still “had the Gaelic,” the Rev. Dr. James Carmichael, returning at the age of eighty-eight for the occasion.

A service of commemoration had been observed at the Old Kirk in the previous year.  It had opened with a procession in which the beadle, William Young, followed by the precentor, D. R. Ferguson and the minister, the Rev. J. W. S. Lowry, in black gowns, accompanied by a large number of the ruling elders of the neighbouring congregations, had made their way out from one of the doorways of the hallowed ruins to a raised platform.  A concluding service of prayer within the Old Kirk walls was attended by those present who in their youth had had their church upbringing there.  Among them were Margaret Anderson, Alan Cameron and Mrs. Cameron, Mrs. Donald Carmichael, William Drummond and James C. Elliott, John H. Ferguson, Mrs. Robert Ferguson (The Derry), Mrs. T. Ferguson, Mr. and Mrs. John McArthur and Mary McArthur ; also Duncan McEwen, Mrs. Finlay McEwen (Jock), Mr. and Mrs. Hugh McEwen, John McFarlane (11th line) and Mrs. Peter McLaren.-Howard Morton Brown