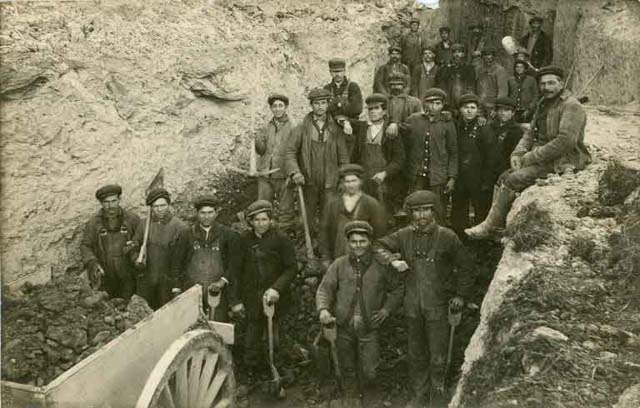 One of the Ottawa auctioneers advertises shares, for sale in the McLean- Gold and Silver Mine, of Dalhousie. All purchasers are requested to go and see the mine, situated on Lot No. 9, in the 11th Concession, Township of Dalhousie, 20 miles from Perth, the property o f James McLean. These Mine These Mines are known to be rich in gold and silver.-– 1871 Almonte Gazette.

Between 1826 and 1832 stonemasons from Europe came to the area to assist with the building of the Rideau Canal and quarried the quartz-rich sandstone along its length. Many of them remained in the area after the completion of the canal’s
construction and their handiwork can be seen in the numerous heritage
stone buildings in Lanark County.

After the early settlers had cleared the land for agriculture, many found they could supplement their meagre farming income with phosphate deposits found beneath their properties.

A synopsis of some of the significant mining developments in Lanark
County follows: From A Place in Time: The Natural Resources of Lanark County —

x The Ramsay lead mine opened in Carleton Place in 1858.

x By 1860, organized companies took over the mining of phosphate
(apatite) by farmers and Canada’s first apatite mine was developed in
the former North Burgess Township. At the time, apatite was in heavy
demand in England, where it was used in the manufacture of agriculture
fertilizers. It was milled at the Smiths Falls factory and resulted in
Canada’s first commercial shipment of this phosphate.

x More than 11,000 tonnes of iron were mined at the Playfair Mine in
the former Dalhousie Township from 1866 to 1871. Iron was also mined
at the Fournier Mine in South Sherbrooke in 1873. The Wilbur Iron Mine
in Lavant Township supported a community of 250 residents in 1888.

* More notes below— The first graphite mined in Ontario was near Port Elmsley in 1870.

** More notes below–When phosphate production ceased in North Burgess Township
mica began to be developed, often in the same locations, in the late
1880s. A considerable quantity of high-quality mica (phlogopite) was
found at what became known as the McLaren Mine, one of the largest in
this part of the province. At the time, sheet mica was sold to the French
navy for portholes in battleships. There were as many as 30 mica mines
operating in the old North Burgess Township at one time.

x In the early 20th century feldspar and limestone were mined in
Bathurst Township and marble began to be mined in Lavant. The
Bathurst Feldspar Mine, which operated between 1926 and 1953, was
the second-largest producer of feldspar in Ontario.

The Globe Graphite Company, a manufacturer of graphite for ammunition closed its doors in 1896 because of dwindling raw graphite reserves in the Elmsley district.  The situation worsened resulting in the local lead mine closing shop in the late 1920’s.  A faint reminder of past glories with old graphite is the grinding stone securing the base of the Ferry Inn’s flag pole

25 years ago the late Miss Lillian Smith of Perth donated a now century old six ledger book to the Perth Museum.  The ledger was originally part of the American Mica Mining Company operating in North Burgess Township during 1864-65.  This pay roll lists the names of many well known district families.  To say nothing of showing the differences in wages paid miners 100 years ago and today.

The first name entered in the ledger is that of Thomas Stapleton, a blaster.  For the week ending September 24, 1864, Thomas received $5 for four days work at $1.25 per day.  Thomas McPharland, pitman, was paid $4.80 for a six day stint at 80 cents a day.  John McPharland, a dresser, worked one day that week for 30 cents.  For the week ending October 1, Owen Powers, foreman, was reimbursed to the tune of $7.50 ($1.25 per day).  G.N. Randall, superintendent of the cutting and directing, was paid $3.21 per day, definitely “top brass” earnings.  But he was still far from the class of engineer F. Poole (F. Poole and Associates) whose salary was $6 per day.  A. Castle, described as a “superintendent” was paid $1 per day and granted $8.35 in “expenses” from Montreal to the mines.  It may be that Mr. Castle was some sort of supervisor whose duties were dignified with a fine sounding title somewhat like discreetly referring to today’s garbage men as “sanitary engineers”.

One hundred years ago the company paid out an average of $219 per week in wages and salaries for 104 days work and a work day was ten hours long.  This means that the hourly rates were as follows:  blaster, twelve and a half cents; pitman, eight cents; dresser, three cents; foreman, twelve and a half cents; superintendent of cutting and dressing, thirty two cents; engineer, sixty cents.

In the interests of genealogy, a reproduction of the names in the list on the ledger is given:

What Happened to the Gold on the Ramsay 7th line?