Balderson Was Once Known As Clarksville

Fame came to Balderson in 1828 when a *grisly murder focused national attention on the then growing village.  The details were on everyone’s lips.  The event caused Balderson author *R.L. Richardson to write “Colin of the 9th Concession” which was given widespread publicity in the pages of the Courier.

Few people know the father of Arthur Meighen taught school in the village.  Meighen was a former Canadian Prime Minister.  But of all the aspects of Balderson life cheese is the most interesting.  The first factory was built in 1881 on land purchased from Nathaniel Balderson, which burned in 1929 and was rebuilt in 1930.  The man behind the helm today is Omer Matte who succeeds an impressive line of cheese makers.  Many are still living There are Chris J. Bell of Perth, James Somerville of Boyd’s, Walter Partridge of the Scotch Line, Charles Gallery of Perth, Robert Lucas of Jasper and Percy George of Christie’s Lake.

The Balderson factory was a feeder station helping to make the giant cheese of 1893 for the World’s Fair in Chicago.  Six feet high and 28 feet in girth the 22,000 pound cheese used up 207,200 pounds of milk before completion.  It was a united effort at helping put Lanark County on the map.

Balderson was incorporated as a village in 1864 although part was then registered as Clarksville, states Mrs. John McGregor, who keeps a village history.  The great bulk of the settlers hailed from the Scotch Highlands chiefly Perthshire.  For a while it was one of Perth’s most important suburbs being settled originally from the Perth military colony.

It was founded by a Sergeant Balderson, who was born in Lincoln, England, in 1783 and died at Balderson in 1851.  Six feet tall, erect and dignified, he served eleven years in the 76th Regiment of Foot under Wellington.  He saw action against the French in Spain at Vittoria, Nive and Nivelle.  He married Annie Hewitt, daughter of Sir Robert Hewitt and homesteaded on Lot 1, Concession 8, Drummond.  Mrs. Balderson and a Mrs(?) Josias Richie were the first white women to sleep in a Perth house. 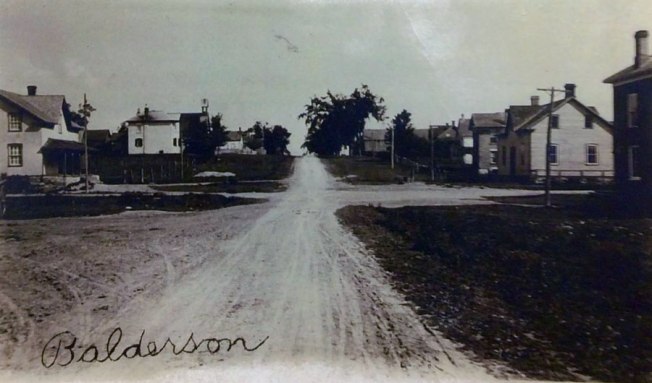 Balderson was followed by Ensign Gould on Lot 7, Henry McDonald on Lot 12—all on Concession 8; John G. Malloch on Lot 14, James McGarry on Lot 10, Donald Campbell on Lot 3, Peter McLaren on Lot 8—all on the 7th Concession; James McNiece and T. Bright on Lot 10, Concession 9.  The last “original” settler died in 1895.

*In 1829 Thomas Easby was hanged by the neck for the brutal murder of his wife and four children the year before.  “Colin”, his young son, testified against his father and sent him to the gallows.  Reaction of the Easby neighbors was shocking, however.  They took his body (Dr. James Wilson led the pack), skinned it, tanned the hide and exhibited the produce at the Perth Fair several years later.  The murderer’s skeleton went west with a Perth boy, old chronicles say.  The young child was sent away to live elsewhere.

Balderson United and St. John’s Anglican are the only churches in the village.  The oldest Presbyterian Church was built in 1839 and is now a machine shed on the James McGregor farm.  The village two room school was purchased by the Loyal Orange Lodge in 1865.

The oldest property deeded is the old Somerville lot, granted by the Crown to Sgt. Balderson in 1815 and now owned by Elmer Ashby, a cattle drover.  Such names as Devlin, Davidson, McGregor, McTavish, Newman, Haley, Kennedy, King, Myers, Jones, McLaren, Closs, Noonan and McIntyre still give a Gaelic tone to the village.

This is a school class picture at the Balderson School – June, 1936.  Inez May Flintoft is in the back row on the left with a white sailor top or dress.  This is the submitters mother.  She taught school in Tatlock and other schools.  The students and teachers are as follows, as indicated by Don McGregor:

*Easby Murder--At about 3:00 a.m. on the cold morning of Wednesday, December 10, 1828, John Tullis (1777-1832), who lived with his wife Margaret Jamieson (1777-1851) and their eight children on a farm at Drummond C-9/L-3(E)1 , about a mile north of the village of Balderson’s Corners, was awakened by distant shouts. His wife then saw an orange glow emanating from the shanty of their neighbor Thomas Easby on Drummond C-9/L-3(W). The Easby cabin was on fire and the Tullis’ teenage sons John Jr. (1809-1885) and Sinclair (1811-1893) immediately ran across the intervening clearing to lend whatever assistance they could. —The Thomas Easby Murders in 1829 — Foulest Ever in Lanark County

RICHARDSON, ROBERT LORNE–Biography—journalist, newspaper owner and editor, politician, and author; b. 28 June 1860 near Balderson, Upper Canada, son of Joseph Richardson and Harriet Thompson; m. 11 March 1885, in Brockville, Ont., Clara Jane Mallory of Mallorytown, Ont., and they had five daughters, one of whom predeceased him; d. 6 Nov. 1921 in Winnipeg.