I got an email from Tim Findlay yesterday, and because I was so busy on Sunday I didn’t open my mail until this morning. Of course Monday was the day after the snowstorm. As the snow still falls I began to research his question about what year the train carrying the Riel rebellion troops were “marooned” by a big snow storm in Carleton Place.  Tim thought it might be sometime around 1885.

So I sent out a historical 911 to the Carleton Place and Beckwith Heritage Museum and by the time I had finished typing out the note– I thought had found it. Feb. 26-27, 1887, when 56 cm of snow fell. It was considered such a piddling amount at the time — really — that the newspaper headline barely murmured the fact that: it was the worst storm in the history of railroading.

But Tim did have some basis to the year 1885 as I found another entry: in April of 1885  they received a squall that fully entombed Ottawa in 71 cm of snow. Okay all well and good but– did they have to deal with a plow leaving 3 ft mounds in front of our driveways?

Thank you Tim Findlay for inspiring yet another blog:)

But here’s my question: would it not be more likely that the troop train would have been marooned in the big deal that entombed Ottawa in 1885 than the 56cm of 1887?–TIM 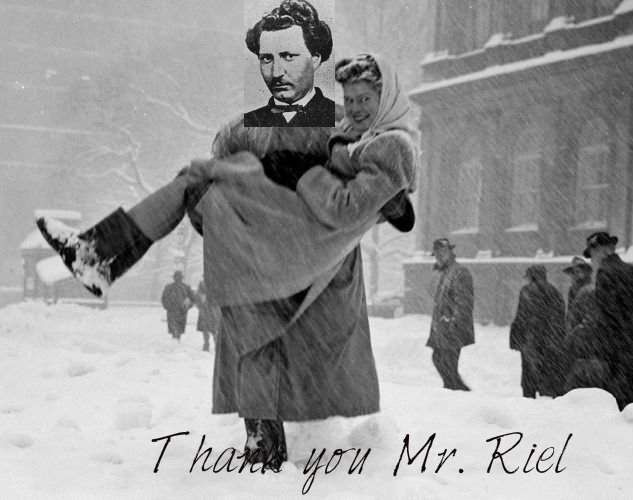 please do not take this photo seriously.. this is just a parody

Louis Riel Day was marked this year by a significant blizzard that brought much of the Red River Valley to a standstill. While snowfall was relatively light, with only 5–10cm reported in most localities (although a few pockets of 10–15cm did exist through the Southern portion of the Red River Valley), strong northerly winds that gusted as high as 70–80km/h produced blowing snow that gave whiteout conditions through most of the Valley.

Charles Mair and members of the Canadian Party (including fugitive Thomas Scott) at Portage la Prairie, enlist Major  Charles Arkoll Boulton to lead an attack against Upper Fort Garry. They march as far as Headingly, where they are stalled “3 or 4 days” by a blizzard that breaks out on the 11th of February 1901.

Here’s to You Mrs. Robinson– A Snapshot Back in Time