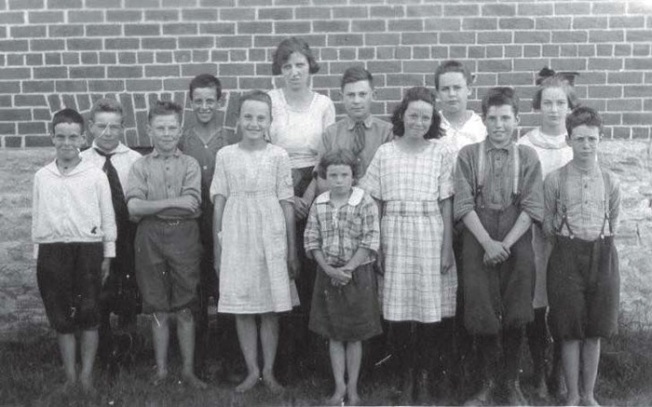 SS #15, Drummond, on the Scotch Line where Nat McLenaghan’s lane entered the road once stood a wide spreading elm tree with a trunk of enormous size.  How this great elm rejoiced to see brides coming to cabins and homes springing up north, south, east and west.  Wider and wider it spread its branches when in mid summer with its luxurious foliage it kindly bestowed cooling cover.  The storms blew, fires razed, and on every side the companions of this elm passed but still it grew and flourished with the settlers.  George McFarlane, Hophni Aytoon, Walter McIlquham, James McIlquham, William Cunningham and William Cuthbertson had farms in this section.  They all had large families which was a great asset to a young country.  Soon a school house was necessary and erected near to where the present school house stands, only on the opposite side of the concession.  The school house was built of logs.  The old tree witnessed the clearing of the site, the rearing of the building, the mothers preparing the children for school and the youngsters toddling off and the settlers taking shelter from the hot July sun while doing statute labor.

About 1840 the once unbroken forest assumed the appearance of farm land.  New houses and barns were erected and during the winter months the sound of the flail was heard in the barn from early morning until darkness while in the home the hum of the spinning wheel was heard accompanied by the steady beat of a woman’s feet as she walked backward and forward drawing out and twisting the thread and running it on the spindle.  One hot August day as Nat McLenaghan and George McFarlane were resting under the old elm, Nat became reminiscent and told George the story of how he crossed at Oliver’s Ferry.  Lighting an ancient clay pipe he began, “I got to the ferry where a man with a birch bark canoe was ready to take me across for a small sum.  I agreed.  He told me to jump in.  Being nimble on my feet I skipped into the canoe which as readily slipped from under me and I fell into the water.  I could not swim so I clenched the water with mighty force but every clench I took it slipped.  I managed to get to the shore and immediately armed myself with stones which I hurled at the head of the canoe man as I thought he had fully intended to drown me.  He assured me of his innocence and his sorrow, advising me not to be so rash when getting into a canoe.  I took his advice and on the second attempt I was quickly taken across.”  The old elm recorded it as another instance of the green Irishman.

On the register in the almost forgotten school are the names of McLenaghan, McFarlane, McIlquham, Culbertson, Cook, Cunningham, Brown, Hunter, Echlin and Finlayson are found in profusion.  While in these families triplets were unknown yet we know that the first school house had to give way to a much larger building to accommodate the ever growing community.  Families of one or two children were a rarity while the ordinary family consisted of 9, 10 or 11.

The second school house was too small and new quarters were demanded.  Duncan McGregor reared the third school house to comply.  The roof was covered by hand made shingles, the floor of boards and it boasted four windows.  A platform ran along part of the north side and over the platform was a black board made of pine boards painted black.  The desks were hand made of pine, strongly built but the tops often gave way to the sturdy jack knife.

Peter McIlquham and James McLenaghan of Drummond vividly recall their early childhood school days.  They tell of the games played, the pranks performed, the fights in the school yard, the reading, the writing, the arithmetic, the hickory stick.  The old schools are clear in their memories particularly the second school which they attended.  The floor of sided logs with gaping cracks filled with bread crumbs invited the rats to dine upon the refuse.  How often would their eyes fill with tears when they dropped the slate pencil and it would disappear between the logs on the floor to fraternize with the rats.  Slates were precious and all exercises were worked on them, the exercises being ushered into oblivion by means of spittal and the coat sleeve.  Some of the early teachers were:  Chrisholm, Cameron, Reynolds, Morgan, Long, Gilespie, York, Stone, Wiley, Thompson and Comrie(?).  They were of the old school—rank and fearless—and they always kept to the proverb “spare the rod and spoil the child”.

Some of the teachers were:  Gibson, Doherty, Thompson, Cunningham, Graham, McFarlane, Robertson, Kerr, McEwen, and McCue.

These are some of the names of the teachers and students of the third school of many years ago, replaced by a more modern building on a new site on McLenaghan’s farm but still bears the name of McIlquham’s school. The fourth school was built by Connors and Legary and stands in strong contrast to the former buildings.  It is modern in every respect and is a concrete monument to the memory of F.L. Mitchell, late inspector of the public schools in Lanark County.

Barbara Lemay (nee Guthrie)
My aunt is in one of these pictures – Betty Guthrie. I also attended SS#15 from grades 1-8. Great memories! I remember Mrs Davidson as one of my teachers.

Blair’s great grandfather, George McIlquham, donated the land for S.S. No. 15 Drummond in 1840.  The first log building was eventually torn down and a rough lumber structure erected, but it was too small for the growing community and the site was wet and muddy, so a brick building was built across the road on Chas Campbell’s farm.  The Maple Leaf Literary Society donated a 6-shelf library in 1915 and in 1925 chemical closets were installed inside the school.  Various items were purchased over the years with money made at annual Christmas concerts, including a victrola, a teacher’s chair, a basketball, a water cooler, an aquarium with five goldfish, and a first aid kit. In 1948, electric lights were installed and a well was drilled.  The school was finally closed in 1965 and is now a private residence owned by André Messier–—The One Room Schoolhouse

Schools Out for the Summer in the County

What Will 50 Cents Get You at the Prince of Wales School?

The Fight Over One Room Schools in 1965!

The Riot on Edmund Street –Schools in Carleton Place

So Who Lived at 410 Franktown Road?

Too Hot for Teacher? What Happened to Yours?