Siren blowing, the Pakenham Township Fire Truck leaves the newly constructed Fire Hall during opening ceremonies. The new hall was built in accordance with Glenn Timmins Construction Ltd., and Glen Timmins himself present the hall keys to the Fire Chief.

PAKENHAM, July 8. – (Special) – Investigations were under way today to determine the origin of the disastrous fire which early this morning destroyed almost an entire block in Pakenham’s principal, business street. Five important business houses were demolished by the blaze, which caused total losses estimated at $70,000. Pakenham has had several costly fires in its history of a century and a half, but nothing comparable to this. Much the heaviest loser is James Cox, who owned a stone three storey store, warehouse and home, of which only the stark walls now remain.

Every building from Preston Burgess’ grocery and telephone exchange to L. A. Mayne’s residence was razed to the ground and the Mayne home was badly damaged. The principal losers were:

Just how the fire started is at present a mystery, except that it broke out in the upper portion of Mr. Mayne’s store, used for the most part as a store-room. Mr. Mayne declares there was no one about the premises at the time, no matches were kept there, yet when William Jordan drove into the village shortly before midnight he noticed the fire, which had then gained considerable headway in the upper premises. With the exception of the Cox store all of the buildings destroyed were old and were of frame construction. Fanned by a considerable wind from the southwest the flames swept through those buildings, cleaned up every shed and warehouse all the way through the next street and swept around the Cox store to destroy the stores of Messrs Burgess and Lesage on the north side of the huge stone building,

Mr. Cox sent a call hurriedly for outside assistance, and first on the scene with their new and effective booster pump were Chief Harry Houston and 10 men of the Almonte fire brigade. They rendered most effective service and kept the fire confined to that one block saving the residences of Mr. Mayne and Mrs. Andrew Stewart from complete destruction. It was a great test for Almonte’s pumper machine, set away back at the river edge, 1,200 feet distant. There was only one length of hose, but from the booster, with a capacity of 420 gallons per minute, could be lifted a strong stream 150 feet in the air. Fire Chairman L. J. Galvin, with Acting Chief Hugh Tetlock and six men came over from Carleton Place while Fire Chief Beattie and six men of the Arnprior brigade rendered fine assistance. Chief Houston pronounced the fire under control at 3.30 o’clock E.D.T. At three o’clock the front wall of the Cox store fell into the street with a deafening roar, but the surging crowd had been warned of the danger and no one was injured. All telephone communication with the village was completely severed shortly after midnight, and electric lights were out on the east side, but both Hydro and telephone crews were quickly at work and these services were restored within a remarkably short time. Mr. Mayne will have his fine home repaired, the roof and upper interior were badly damaged. The Stewart home, mostly damaged at the rear, will also be rebuilt, but all other buildings are reduced to ashes and the owners are not prepared to say whether or not they will rebuild.

Mr. R. A. Stewart, Reeve of Pakenham, proudly announces the official opening of the Pakenham Fire Hall. The opening cutting of the ribbon and presentation of the keys took place Saturday, December 11, just before the Christmas parade.

CARLETON PLACE, Ont., July 8.- (Special)-At his duties helping to direct the work of fireman of the Carleton Place Fire Department early this morning, hurriedly loading their fire fighting equipment on a specially chartered C.P.R. flat car, for the fire at Pakenham, Captain James M. Barber suffered concussions and heavy body bruises when he fell from a platform at the freight sheds here. He was removed to his home where he is under the care of Dr. J. A. Johnston. Several stitches were required to close a wound in his face, caused from the fall. He also is suffering from injuries to his arm. With the telephone system wiped out in Pakenham, 16 miles from here, the C.P.R. operator in the village sent a plea for help to aid the Almonte Fire Brigade already on the scene and a general alarm was sounded in Carleton Place about 1.30. A call was immediately put through to Smiths Falls for C.P.R. aid and an engine and flat car were despatched to Carleton Place, where the local brigade loaded their equipment for delivery to Pakenham. Delay was caused when, the heavy fire engine crashed through the loading platform but with help everything was in readiness for departure when the C.P.R. operator at Pakenham interrupted the filing of the fire story to The Journal to inform the Carleton Place C.P.R. depot that the fire was believed under control at 2.40 this morning. Volunteer truckers in Pakenham were standing by at the Pakenham siding ready to take the Carleton Place equipment off the flat car when the call for their help was cancelled. 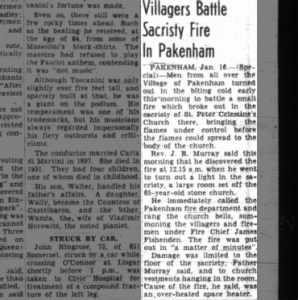