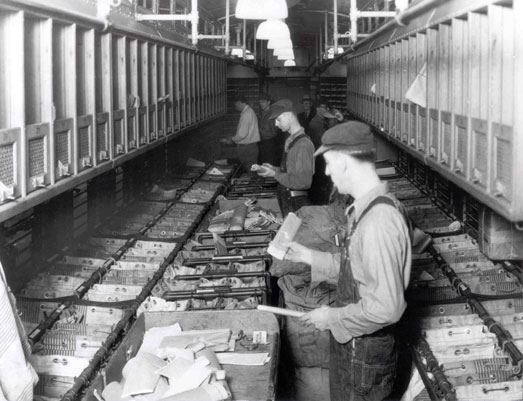 The trial of W. H. S. Simpson, the mail clerk, of Brockville, for having stolen the package containing one thousand dollars, took place on Friday last before *Judge Senkler in the court house in Perth. The place was packed so that the wood pile had to be used for seats.

The young man was discharged by His Honor and practically invested with the white robes of innocency. All the evidence given before the bench of magistrate at the private hearing in the council chamber here was revived. The witnesses were Miss Virtue and Messrs. Struthers, McEwen, McFarlane, Allan, Trevor Patterson and Inspector Hawken.

On the other side were a number of railway postal clerks, as well as Mr. O. K. Fraser, registrar, Geo. P. Graham, M.P.P., Mr. Mackenzie and Post Office Superintendent. Plumb: The former list proved the succession from the Union Bank to the clerk in the car. There was no hitch, no missing link, no suspicious action. On the other hand the latter witnesses established the inviolate charicter of Mr. Simpson, especially Mr. Plumb, who, amid the radiant sympathies of the audience, told of the large number of times that Mr. Simpson had reported-his finding of registered letters among the common stock. Mr. Plumb had the documents to prove his case. Others had failed in duty—he had proved to be the gold sovereign and a little more.

This testimony made a powerful impression on the Judge and the public. The internal history of the post office here was revealed in a manner that was intended to be favourable to Mr. Simpson, meaning by that the several branches of business carried on, which necessitated the presence of many various persons in the distributing room. The Judge summed up the whole matter by saying it was not proved that the clerk received the money, and he must not allow the charge to hang over him an instant longer. He therefore discharged him, as above, whereupon the crowd, violating the sanctity and silence of the hall of justice, broke out into loud applause.

Mr. Simpson burst into tears when his nerves were released. Mr. Struthers was under cross-fire for one hour and a half. After the lawyer was through with him, he volunteered the sworn testimony that he did, with his own hands, put the package in the bag, and looked into the bag and saw it there, and locked the bag. Mr. Simpson, on the contrary, entered the same box and swore positively that when he opened the bag the money was not there. Yet he said the bag was intact when he received it. The money could not be “spooked” away. The money or the culprit was never found. 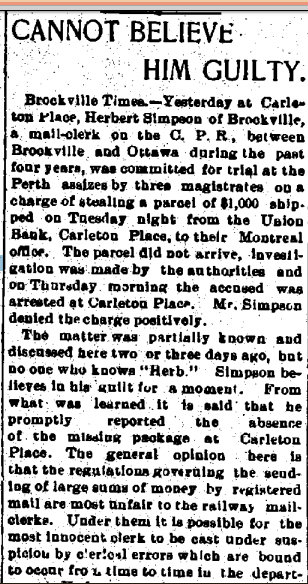 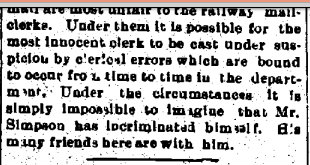 In consideration of the event, one must not overlook the biography of Judge and Mrs. Senkler.  The judge is an Englishman by birth having been born in Doching Docking, Norfolk County, England on 15th Jan., 1838. He as a son of Rev. Edmund John Senkler, M.A. of Cains College, Cambridge, a clergyman of the Church of England.  His mother was Eleanor Elizabeth Stevens, daughter of Rev. William Stevens, M.A., of Sedberg(?), Yorkshire, England.  The parents of Judge Senkler with their family of nine children came to Canada in May of 1843 locating in Quebec where for some time Rev. Mr. Senkler was a rector of the high school.  Later he moved to Sorat and in September of 1847 he moved to Brockville where he died on October 28, 1872.  Mrs. Senkler followed him to the grave on 16th March, 1873.  The education of Judge Senkler was the care of his father and the future judge commenced life in mercantile pursuits.  With the desire for law uppermost in his mind, he studied with Hon. A.N. Richards, the late Lt. Governor of British Columbia and also with the late Hon. Edward Blake.  He was admitted as solicitor during the Michaelmas term of 1860 and was called to the bar in Trinity term, 1861.  The judge began his practice in law in Brockville first with the late J.D. Buell then with Hon. A.N. Richards and lastly with his brother the late Edmund John Senkler (afterwards county judge at Lincoln) and continued in Brockville until December of 1873 when he was appointed Judge of the County Court and County of Lanark, succeeding Judge Malloch.  Then following this appointment others came:  on the 15th October, 1875, he was appointed Master in Chancery here by the judges of he court; on the 10th October, 1877, Referee of titles by the Judges of the Court of Chancery; on March 14, 1882 local judge of the High Court of Justice for Ontario; and on October 26, 1885 revising office for South Lanark by the MadDonald government. Judge Senkler has taken an active interest in church, education and military matters.  He has helped to organize the Brockville light infantry attaining the rank of ensign.  True to the traditions of his house, he is a member of the Church of England and served as church warden in St. Peter’s Church, Brockville and St. James Church, Perth for several years.  For 31 years he has represented the Perth parish at synod and much to the regret of St. James Church, declined re-election at their last vestry meeting.  In educational matters, Judge Senkler has devoted much interest and energy.  He is a member of the Board of Education, first representing the county as Collegiate Trustee and since 1892 has been a public school trustee for the centre ward.  He was chairman in 1893 and 1894.  the judge is especially concerned with public school affairs.  His Honor served the town on the public library board being an appointee of the town council and for several years has been chairman.  The marriage of Judge and Mrs. Senkler took place on May 21, 1862 and was celebrated by the late Rev. Dr. Adamson in the Episcopal Cathedral in Quebec.  Mrs. Senkler is a daughter of the late Benjamin Tait of Newboro who at that time represented South Leeds in the Parliament of Canada and who sat for the same riding in the first parliament of Ontario.  The issue of this marriage was two daughters and one son.