Carleton Place Woman Killed—Last Friday morning the early Toronto Express, about on time, ran over and killed a woman named Mary McLeod a quarter mile east of Appleton.  The driver saw her on the place of peril and screamed an alarm but the poor woman, whose mind was off its kilter, paid no attention and although the brake was applied hard it could not be stopped and plunged over her killing her instantly.

It backed up and a brakeman was left in charge of the remains until Mr. Spencer and Dr. Wright arrived by the private car La Chute.  The doctor found the facts as related and decided not to hold an inquest.  The woman belonged to a family in the neighborhood and had escaped unknown. 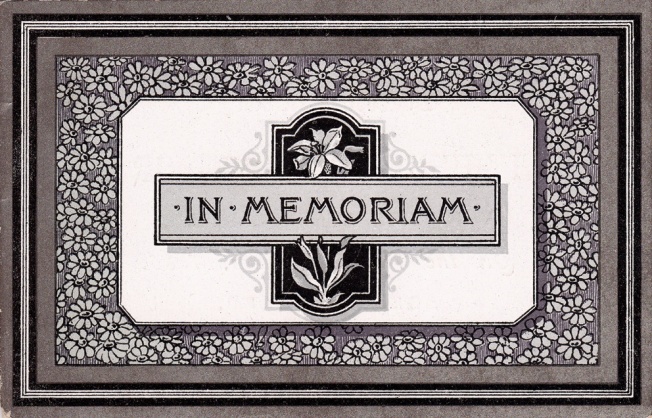 Last week Miss Eva Griffiths, 2nd Line Drummond, slipped down the cellar stairway and the accident started bleeding of the stomach which was said to be ulcerated; and the sufferer died on Friday.  Her funeral took place on Saturday to Elmwood Cemetery, Perth, and was one of the largest seen from Drummond in many years.  The father of the deceased was killed by lightning last summer and Eva was with him in the barn at the time and tried to drag his body from the burning building.  The deceased was only 19 years old.

Wayside: We regret to learn of the death of Miss Mary Kehoe, daughter of M. Kehoe, 5th Line Drummond.  The deceased was a young girl with a very endearing disposition and was beloved by all who knew her.  While attending school, her gently and kind disposition made her a favorite with all her schoolmates and since then she has gained many more friends.  But this bright, promising life was brought to a close.  She was in the best of health until a few months ago when she took a cold which was so slight that she did not attend to it at once but after some time, she found it was more serious than she had at first thought.  About a month ago, she was confined to the house.  During her illness the same sweet disposition prevailed, never one murmur or complaint escaping her.  Although very weak she was conscious to the last and on Wednesday morning called all of the family to her bedside and there one by one she bade them goodbye and had a parting word for each of them.  The funeral took place on Friday, 23rd November, proceeded to the R.C. Church and from there to the cemetery.  It was very largely attended.  She was only 19 years of age.  The family were all at home at the time of her death except one brother, Henry, in Chicago, who was on account of business unable to come home.

Enright—Died, on Friday, (date illegible) May, Catherine Enright, beloved wife of Timothy Enright, at the early age of 32 in Bathurst.  Deceased, after one weeks illness, was summoned by the Omnipotent God to the mansions of eternal bliss.  Almost, in fact, entirely unexpected, this sorrowful bereavement has plunged her household into (two illegible words).  Her end was peaceful as her life was pure and so calm was her death that even the watchful eyes of a loving husband failed to detect the slightest change in her, now living, now dead, and so quickly.