Agnes Richter was a German seamstress held as a patient in an insane asylum during the 1890s. During her time there, she densely embroidered her strait jacket with words, undecipherable phrases and drawings which  documented her thoughts and feelings throughout her time there.

Through the script she transcribed herself into time, space and place. Her writing orients and disorients. Made in 1895, it is a standard issue uniform given to mental patients at the time. Richter has embroidered so intensively that reading impossible in certain areas of the garment. Words appear and disappear into seams and under layers of thread. There is no beginning or end, just spirals of intersecting fragmentary narratives. She is declarative: “I”, “mine”, “my jacket”, “my white stockings…., “I am in the Hubertusburg / ground floor”, “children”, “sister” and “cook”. In the inside she has written “1894 I am / I today woman”. She has also re-embroidered the laundry number printed on her jacket “ 583 Hubertusburg”, almost transforming something institutional and distant into something intimate, obsessive and possessive. It is a compelling piece of hypertext and untamed writing

This remarkable object was collected by Hans Prinzhorn, a psychiatrist who ardently collected the artwork of his patients at a Heidelberg psychiatric hospital in the early 20th century.

So is it really a strait jacket? It “depends on who is looking at it” – and I wonder what an textile conservator/historian would have to say – looking at how the thing were made. 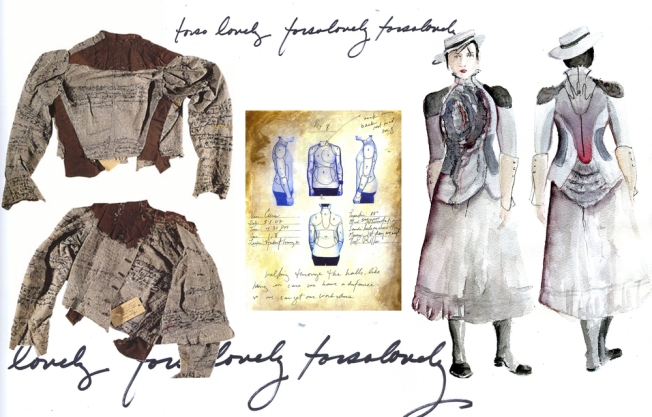 Torsolovely — RISEN from the Thread

Arthur Bispo do Rosário was a Brazilian psychiatric patient diagnosed with schizophrenia that also became famous for his embroidery. Besides Bispo, there was also a Psychiatric Hospital in Rio that during the 40s had a art studio for the interns. The works of the interns became a exposition in Zurich visited by Carl Jung!

Problem is, my final thought is this: is this really a straitjacket? The sleeves are shaped and short enough for the hands to be free; there are bust darts, and the buttons would pop out of their holes with the slightest strain. I am positive this is just a ladies jacket. But who am I to be totally sure?  I wonder if she were alive today if she would have been given therapy and producing works of art, like this.