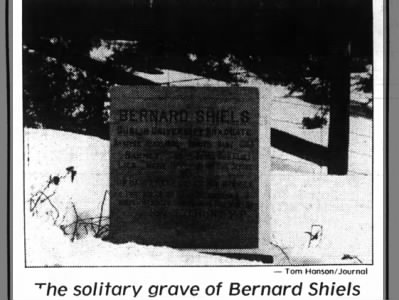 An unsuspecting hunter walking through the woods in the Cedar Hill District could get quite a surprise if he happened to come into a small clearing in the bush and in the middle of that clearing observe not a deer but a white marble monument in a fenced plot. If he walked over to inspect the rather large monument he would read this cryptic inscription cut in the stone: Excerpt from Hal Kirkland Almonte Gazette THURSDAY, DEC. 26, 1968–Read the Almonte Gazette here..

BERNARD SHIELS–DUBLIN UNIVERSITY GRADUATE
ARRIVED HERE 1830 BURIED HERE 1866
BARNEY BY HIS OWN FAULT
LIES HERE BY HIS OWN DESIRE
HIS HEIRS RESPECTED HIS WISHES
AS TIM E ROLLS ON, DEAR NEIGHBORS
KINDLY RESPECT TH IS PLOT IS THE WISH OF
REV. T. J. HUNT P.P.– 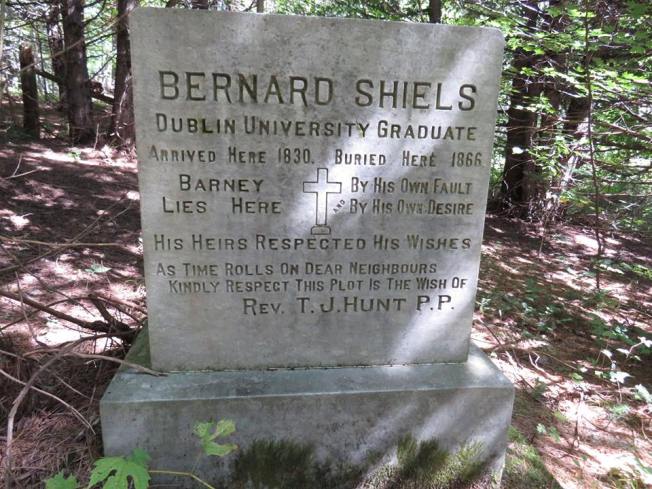 Some of you may know where this gravestone is. It is found in Fulton’s sugarbush which was the original home of Barney Shields. But did you know that he has a connection to Clayton. One of his daughters, Mary Ann, married a Clayton man, Charles Belton and they raised 12 children in Clayton?–Photo and Text–Rose Mary Sarsfield

There is no doubt that Barney still lies in a lonely grave surrounded by the forest that has existed for more years than all of us put together. He wasn’t a prominent man, he was just like you and me. He owned over 100 acres, but as in most places in Lanark County he only managed to clean less than a quarter of those acres in his lifetime.

So years from now some genealogist will come along and wonder who Barney was and why a graduate of the Dublin University was buried there among the poplar trees. As the story goes a man named Father Hunt found the grave years ago when Barney’s marker was just an old weathered cross. To make matters even stranger there had been a log house fire and everything around Barneys grave had been burnt–yet the old log fence around his grave remained. No doubt the local gossip was that the local Catholic Saints had saved that place for a reason.

Barnie came to Canada in 1830 and became one of only 5 students brought out to work on a survey gang by Rev. Michael Harris of Perth. Well, there are a few stories kicking around about disagreements and such, but I think in all honesty he met a gal and wanted to settle down. Her name was Katherine Bresnahan and she should have told him upon marrying that he should have never taken up farming.

Instead he chose to do “pen work” for the neighbours and even took a stab at clerical work for Robert Dickson, Justice of the Peace while his farm dwindled away. Suddenly Barney and Katherine found themselves with a family of four little girls and a son named Thomas. Like a lot of young women in those days Katherine died giving birth to the last of the Shiels children and the kids were then sent to live with neighbours. It was said when one of his daughters was old enough she returned to help her Dad and even made up a song about the confusion that occurred daily in old Barney Shiels home.

Even though he was poor Barney and his daughter served up a meal to those who came to visit and apparently a lot did. For someone so obscure his last resting place is marked with a monument that might suggest this man had ample means and prestige. But in reality he fell out of favour with the Catholic Church in Pakenham and that is why his inscription reads: “Barney lies here by his own fault”.

His neighbours William Lowe and Robert Dickinson carried out his last wishes and years later the Parish Priest in Pakenham wanted his remains transferred to the Roman Catholic Church Cemetery.  But his son Thomas would not allow it– and instead put up the log fence around his father’s grave.

So now the story of Barney Shiels is part of history– and if only that song his daughter composed was kept– it would be a 360 memory for the Shiels Family.

Cedar Hill:
The village was built around the first school (L6 C8). It was first called Upper Pakenham. In the Historical Atlas for Lanark County, it is marked Cedar Hill PO.

Bernard Shields -5 years before he died.